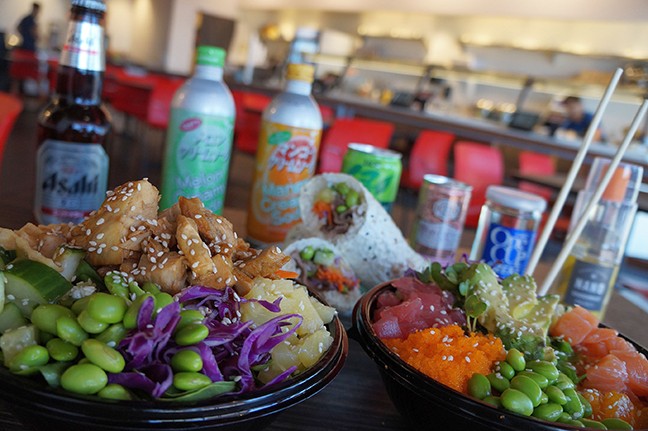 OK, I'm done with the Hokey Pokey wordplay. Time to get down to the subject at hand:

Bin An is a man who knows fish. His dad is better known as Mr. An, owner of those stadium-like sushi and teppanyaki eateries dotted across our lovely landlocked landscape. He grew up with firsthand knowledge—and appreciation—of how to obtain, handle and serve the freshest fish available. When it came time to open up his own place downtown, MiAn, Bin went big. So big in fact that after almost two years of a successful run, Bin knew that it was time to expand.

Except this time, he wanted to scale (sorry for the fish pun) it back a bit. If not a lot.

An casually opened the fast casual Hoki Poki a few months ago without a lot of the hype or tenacity it takes to get a new restaurant concept noticed and accepted. In a quiet strip-mall spot on Grant between Tanque Verde and Wilmot roads, An found a space to continue his passion for getting us all in on delicious fish-inspired dishes. This time as poke.

"When I travel to New York and California, poke is the big thing right now," An says. "And all of the poke places are packed, all the time. Then I thought I could do this. I mean what is poke anyway? It's sort of like a poor man's sushi, when you break it down."

That last statement is all too true. Poke started out as an easy snack for the not-so-wealthy local fishermen in Hawaii, using scraps they couldn't sell to merchants, eaten over a bed of rice. The quick dish grew in popularity to such a degree that it shipped its way over to the mainland. Currently, when you visit the West Coast, it's almost impossible not to trip over a poke stand, upscale or not. Now it seems that trend has found its way to the Tucson desert. It makes sense. Cool, crisp and refreshing vegetables mixed with lightly marinated fleshy raw fish over perfectly cooked grains topped with subtle yet vibrant sauces...in this heat? Some political type worried at one point to have a taco truck on every corner (this is Tucson and we got that covered, thank you), but perhaps poke fathoms more reasonable. For six-plus months out of the year, we might need more than grilled meat stuffed in grilled tortillas due to the inevitable swelter. Perhaps local folk such as Bin An are totally on to something.

"The same fish that we serve at MiAn is the same that gets served at Hoki Poki," An says. "That fish gets picked up every morning, which is flown overnight from Japan, in a refrigerated truck that I purchased specifically for the fish. I personally drive that truck from MiAn to Hoki Poki every day. And it's a manual transmission. And I suck at manual."

OK, I am about to divulge a new-ish technique used to harness the smooth and redolent fish flavor, and I hope you don't get too upset because when you eat the poke at Hoki Poki, this is what you're getting:

When fish are harvested from the deep, alive and wiggling, instead of quelling them by blunt means, a hair-thin electrical rod is inserted down their spine and into their brain, sending the fish into a sort of induced coma, thus making the meat of the fish richer and tastier when it arrives.

"Actually, it's more humane that way," says An.

Everything at Hoki Poki is house-made, which comes through with each bite. It's easy to chat up the fish, vegetables and citrus you get to choose in your bowl—or the always intimidating "sushi-rito," which they offer as well—but for me, it has to be the finishing sauces that bring it all together. The fact that they make their own Gochujang, a Korean spicy sauce, is thrilling enough, but include house eel, ginger and ponzu and it's like that payoff in a Marvel movie when you sit through the credits to discover a cliffhanger teaser before the lights come up.

To make downtown eating matters surmount, MiAn has transformed into Hoki Poki during their lunch hours. It just made sense to An, seeing as a lot of 9-5ers don't really enjoy spending high-end prices on high-end sushi on a regular basis.

"I'm excited and I love what we do at MiAn, but Hoki Poki is so much more relaxed," sighs An. "And honestly that's what everyone is looking for these days, myself included."