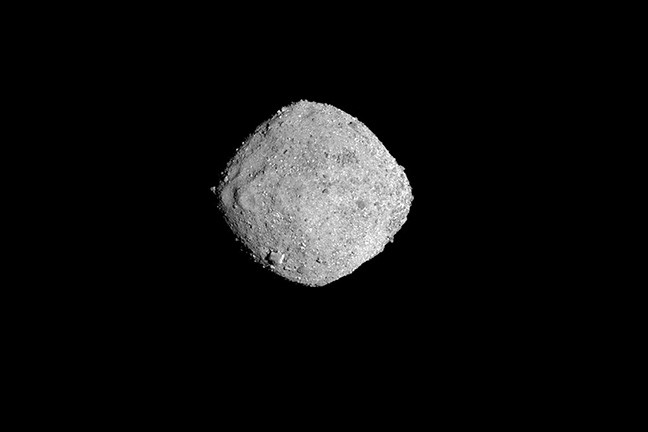 Courtesy
The first high quality picture of Bennu, taken from 85 miles away

"We have arrived," said Javi Cerna, telecom engineer on the OSIRIS-REx mission.

This declaration came from the Lockheed Martin Space center, where a team of scientists eagerly awaited a response from the spacecraft OSIRIS-REx, indicating it successfully arrived at its destination, the asteroid Bennu. The space mission, a collaboration between NASA and the University of Arizona, launched on Sept. 8, 2016.

Now only 12 miles from Bennu after a two-year, two-billion-mile journey, OSIRIS-REx will spend the next two years mapping the asteroid's surface, looking for a stable and scientifically interesting enough area to collect samples from.

"The exploration of Bennu has just begun, and we've got the adventure of a lifetime awaiting us for the next year and a half," said OSIRIS-REx principal investigator and UA Professor of Planetary Science Dante Lauretta. "The best times are ahead of us."

Bennu, roughly the size of Pusch Ridge on the Catalinas, was chosen as the goal due to its carbon-rich surface and near-Earth orbit. From the collected samples, researchers hope to examine the origins of life and beyond.

"The implications of what we retrieve are about the role these carbon-rich asteroids played in bringing the building blocks of life to Earth," Lauretta said. "But also for looking for life elsewhere in the universe."

Many of the mechanics on OSIRIS-REx were designed by UA staff and researchers. The OSIRIS-REx Camera Suite, or OCAMS, consists of three cameras, two of which were designed and built by researchers at the UA College of Optical Science. The high-tech cameras allow OSIRIS-REx to both view Bennu from millions of miles away and to be able to spot a penny-sized object on Bennu's surface.

"It is really important to have universities involved in these missions, because that is where the scientific questions and curiosities come from," Lauretta said.

Also among the OSIRIS-REx team is a group of UA research students tasked with counting and documenting the boulders on Bennu's surface. Lauretta is confident they'll stay busy for some time to come.

"This is very exciting, but there are still many things to learn about Bennu," said Daniella DellaGiustina, image processing lead scientist for OSIRIS-REx.

Now having successfully approached Bennu, the spacecraft will begin a series of orbits from roughly four miles away, slowly drawing in to a mile away and even closer.

OSIRIS-REx will not be landing directly on Bennu to collect cosmic samples. Instead, the spacecraft will perform a very close flyby, and blast the asteroid with gas to knock loose rocks and dust. A robotic arm will then extend and touch Bennu for roughly five seconds to gather the samples. The retrieval mechanism, called "TAGSAM" or Touch-And-Go Sample Acquisition Mechanism, will be able to collect up to two kilograms of of dust and sand from Bennu.

If the sample retrieval is not successful, OSIRIS-REx can try a second and third attempt. However, Lauretta estimates if any amount of material is retrieved at first, they will not try for an additional attempt to gather more.

Sample collection is scheduled for early July 2020. Afterward, the spacecraft will fly back toward Earth and launch the "Sample Return Capsule" for landing in the Utah desert in September 2023.

"This mission has been an incredible collaboration between science and engineering to do something that we've really never done before," DellaGiustina said.

Bennu, which moves at an average speed of 63,000 mph, is so far from Earth that transmissions from OSIRIS-REx take seven minutes to reach us. Over the next few weeks, NASA and UA will be announcing their initial observations and reports from the small probe orbiting the distant asteroid.