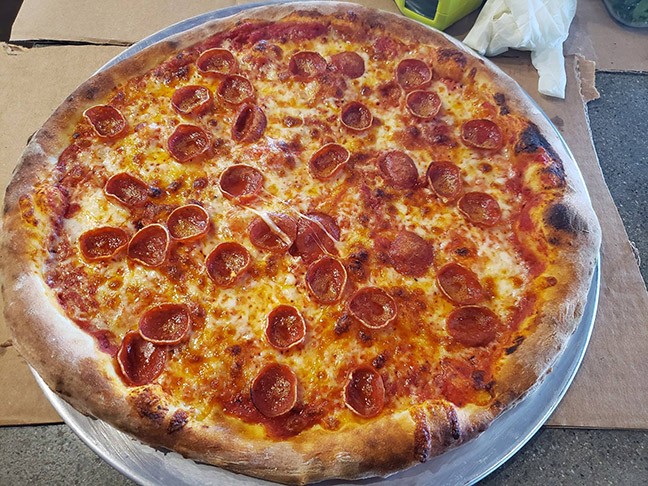 Nelson Miller is a brave man for several reasons.

The first is his service with the Navy. It's not an easy task crossing seas to defend our country as a Navy SEAL.

The second is the fact that he is captain of the Trident family of restaurants, a trio of fun, comfortable sports-centered gastro-pubs that have served up locally loved grub and grog for nearly two decades. OK, not too sure why owning Trident makes a man brave, but when he opened the first in 2001, serving ocean crustaceans in the desert was probably considered risky. Let's go with that.

But the real reason Nelson could be labeled brave is attributed to his newest culinary venture. Because it is all about pizza.

Now I'm sure you're scanning this and wondering why would anyone want to open another pizza joint in a city wrought with pizza joints? There's one very simple reason: Everybody loves pizza. Especially Jason Machamer, Nelson's business partner for more than seven years.

Machamer cut his Tucson pizza teeth stretching and saucing dough back in 1999, working at the defunct Metropolitan Grill before heading up north to attend culinary school. After years of fine dining, Machamer teamed up with Nelson, moving into Trident with a chef's vision of paring down the menu and focusing on what the bar did well. This proved so successful that two more Tridents opened, leaving Miller and Machamer curious as to their next strategic move.

Grimaldi's Pizza on Campbell Avenue closed down in 2017 after a good 10-year run. With the university just across the street, Machamer knew that it was time to get back to his pizza roots and opened Trident Pizza Pub in late 2018.

"I thought Grimaldi's had really good pizza, but...that's all they had," says Machamer of the former resident. "Here we've added sandwiches, and the salads we make are an extension of what we serve at the other locations. We're not reinventing the pizza, but it is the same quality that you get from Trident that sets us apart."

After the Trident team opened up the space and completely redid the kitchen, Trident Pizza now has a very comfortable atmosphere and a familiar feel to those that have visited classic New York delis or pizzerias. It has that "come inside, sit down and let's get down to eating and drinking" approach without much presumptuous affectation. The inclusion of an old school diner order ticket wheel inspires a nostalgic quality as well.

Great, the new place looks good. Now what about the food?

If you've been to any of the Tridents, you know that the portions they serve would make any sailor on shore leave stand up and salute. For those who appreciate Trident, its pizza ancillary is your next obvious port of call.

The meatball appetizer ($11) consists of four garlicky spheres of rolled beef that are house-made, mozzarella-soaked deliciousness, while the tater tots ($7.50) have a truffle oil base with a garlic aioli dip making them more than fit for service.

The grinder ($12.50) gives you a clear idea of why these sandwiches are called subs, because it's nearly the size of one, packed with sopressata, capicola and deli ham along with provolone cheese and finished with a tangy red wine vinaigrette. Honestly, that was one of the best—and biggest—Italian deli-inspired sandwiches I've chowed in quite some time.

Luckily the pizzas ($12.50 for 10", $20 for 16") easily complement the rest of the menu. The Centurion variety, honoring our civic leaders and longtime Trident patrons, uses a spicy sausage flown in from Chicago, along with pepperoni and a homemade aromatic red sauce. This one will most likely make a name for itself among serious pizza aficionados.

Machamer is currently working on a pizza of the month option, such as a white clam—because of course he and his crew would. It wouldn't be Trident if seafood wasn't used in some way or another.