Fire and Fury: How To Train Your Dragon 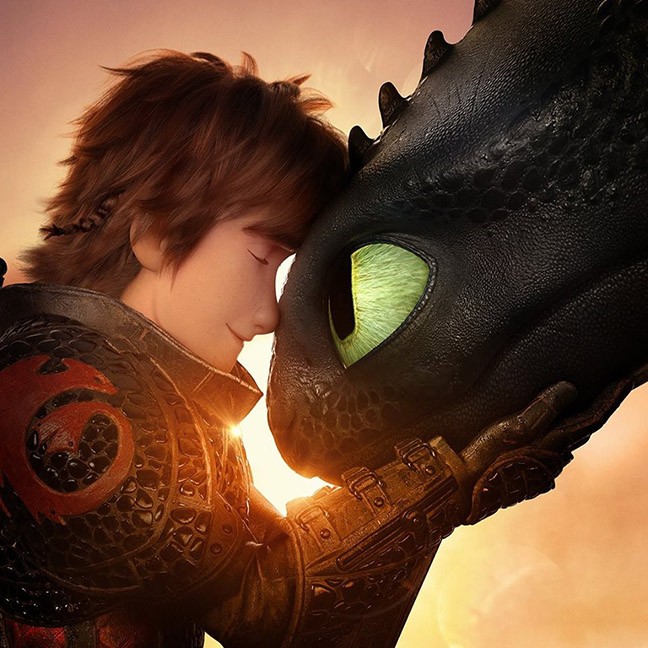 The tale of Toothless the freaking adorable animated dragon comes to a close (maybe) with How to Train Your Dragon: Hidden World, the third chapter in what producers are calling a trilogy. Yeah, you know, the same thing they said about Toy Story 3 before greenlighting Toy Story 4.

If the story continues from this chapter, you won't get any complaints from me. I think the dragon beat could very entertainingly go on with this franchise.

Hiccup (Jay Baruchel), now the chief of his Viking tribe, and dragon buddy Toothless happen upon another Night Fury dragon, this one a female, and Toothless is justifiably smitten. After a first date that involves some hilarious show-off dancing, the two hit it off, and Hiccup might find himself staring down a future life without Toothless in it.

Before Toothless and his new gal pal can head off for wedded bliss in the mystical Hidden World, where dragons live happily, they must contend with the evil Grimmel (F. Murray Abraham), who wants to steal all of Toothless' beautiful music ideas and pass them off as his own. Oh, excuse, me, that would be Abraham's Amadeus character. No, his character in this one wants to kill all of the dragons, of course.

The movie clocks in at 104 minutes, but if feels more like 60. Director Dean DeBlois, who directed all three Dragon films, gets credit for making the proceedings breezy, and never boring. His only other directing credits are the equally enjoyable Lilo & Stitch, and a Sigur Ros documentary. Thankfully, the great Jonsi of Sigur Ros provides another terrific song for the soundtrack.

While these films have always been visually enchanting, this third chapter definitely tops itself. Scenes where the enraptured Toothless and Light Fury soar into the skies and fly together are breathtaking achievements. Also, I have to point out again that the Dragon movies do a fabulous job with human hair. There can be all sorts of amazing things going on but I sometimes find myself just admiring how Hiccup's hair waves in the wind. So lustrous and lifelike!

Beyond visual amazement, the film packs a nice emotional wallop. Toothless remains a nice combo of E.T. and your favorite dog, so he's truly lovable. Seeing him get a nice ending (details of which I won't give away) might leave you crying a lot more than you thought you would at an animated movie. This one has an animated tearjerker factor that puts it alongside the likes of Toy Story 3 and Up.

Speaking of E.T., I couldn't help but notice that a lot of the Toothless sounds owe plenty to the little Spielberg alien. He croaks and purrs just like him. He doesn't touch things and make them better, though. He just kind of spits on things.

Most of the voice cast from the other films return, including Kristen Wiig, Jonah Hill, America Ferrera and Gerard Butler. Not surprisingly, T.J. Miller doesn't get to return as Tuffnut. Like Louis C.K. on The Secret Life of Pets sequel, he got his ass booted from an animated movie for bad behavior. I'm thinking Miller's status in hard R Deadpool films probably remains safe.

If this is, indeed, the end for Toothless and Hiccup, it's a satisfactory conclusion for sure. How to Train Your Dragon: The Hidden World will keep you and your family substantially entertained. I heard a bunch of folks yelling stuff like "That movie made me cry!" when the credits were playing, and if you have a tendency for in theater waterworks, be prepared. You might wind up crying in front of a bunch of kids.