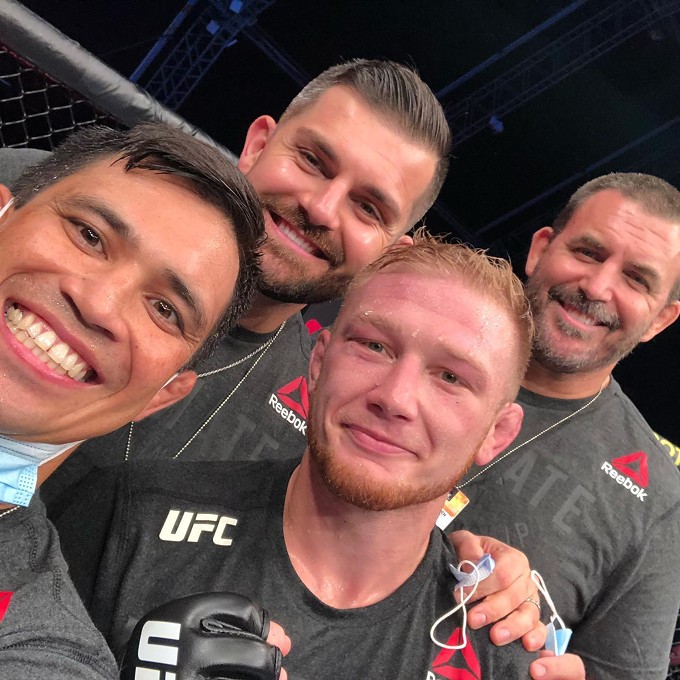 It's only been three weeks since bantamweight MMA fighter and Tucson resident Casey Kenney ended China's Alateng "Mongolian Knight" Heili's four-win streak during UFC Fight Island 4. Once the southpaw's hand was raised by the referee, Kenney jumped from the octagon to the judge's table yelling, "I want to fight again next weekend."

"That was the first time I did it, but I kind of wanted a quicker turnaround between fights," Kenney said. "Usually four or five months will go by."

UFC President Dana White was listening and added the #22 ranked fighter to UFC 254's undercard in a bantamweight division matchup against England's Nathanial Wood, ranked #24. Both fighters have 4-1 records in the UFC. Kenney said he's ready and "one step ahead" of Wood.

"I'm getting to a point where the guys aren't easy to fight, no matter who it is," Kenney said. "(Wood) is a good opponent who's a well-rounded fighter on his feet and on the ground, but I think I'm just better all-around than him."

Kenney's trainer and former UFC flyweight contender, Chris Cariaso, said while Wood has faced his fair share of southpaw strikers, the English fighter hasn't been matched against an opponent of Kenney's skill.

We're ready for (Wood) to anticipate our game," Cariaso said. " But we've got some tricks up our sleeve and we're ready to show him a well-rounded Casey Kenney."

Making the trip to Abu Dhabi is no easy feat either. You may recall the UFC was forced to find a new international venue in early April to host fights due to U.S. travel restrictions brought on by the pandemic. Fighters now have to start their journey at UFC's headquarters in Las Vegas, where they are quarantined until their coronavirus test results return. Once they get a negative result, the fighters will then take a 20-hour flight to the United Arab Emirates, where they will be placed in quarantine until a second round of test results can be verified. Only then are they free to roam the small island off the coast of Abu Dhabi.

"It's definitely different than what we're used to. Normally we would stay where we're fighting for nearly a week, but now it's a bit longer, like 12 days and a lot of time in hotel rooms," Kenney said. "(Fight Island) has everything we could want for fight week but we can't explore the city. I wish we could go out there, but I'm just happy to be working right now."

The 29-year-old said he moved to Tucson from Indiana eight years prior to pursue MMA after becoming unsatisfied with life as a student wrestler at the University of Indianapolis. After winning a few underground MMA matches in the Hoosier state, he said he discovered his drive to pursue fighting as a career.

"I left a wrestling scholarship and pretty much everything I knew in Indiana to pursue this goal, so I have some high expectations for myself," Kenney said. "I always knew I would make it to the UFC, but it's definitely not as easy as it seems."

Soon after settling down in T-Town, Kenney began training with Cariaso at his eastside gym, Rise Combat Sports. Within weeks of working with the Indiana native, the trainer said he saw Kenney's potential and knew he could hack it in the octagon.

"At that point, I was just starting to train other fighters while training for my fights and Casey wanted to start training with us," Cariaso said. "I used to tell them, 'If you want to fight, you got to show up every time, no matter what.' It came down to only Casey showing up consistently. That's when I knew he was someone who had the same work ethic I do."