Despite great work by Paul Dano, 'Ruby Sparks' is hit-and-miss

Calvin (Paul Dano) peaked early. Really early. He was the toast of the literary world while a teenager, but he's only been able to muster short stories for magazines in the decade since his debut novel. The obvious comparison is J.D. Salinger; that's probably made so apparent to provide us with the context that Calvin is a big deal.

He would like to write, and obsesses to his analyst (Elliott Gould) about his inability to crank out that next book. The inspiration just isn't there. Worse, Calvin's professional rut has made him a social wreck. Always one to avoid crowds, he finds it difficult to leave a small radius around his house. He blames some of that on his dog, who Calvin believes is embarrassed by the fact he squats to pee like a female dog; thus, it's the dog who doesn't want to be seen in public.

At his analyst's urging, Calvin writes a one-page story, inventing a character who likes his dog exactly the way he is. With the pressure off, Calvin begins writing again, about a girl named Ruby Sparks.

Ruby (Zoe Kazan) came to him in a dream, and by the time he begins his very short story about her, Calvin has mapped out her whole life. Then, one morning, he wakes up to find the real Ruby cooking him eggs. Somehow, he has made a woman materialize, quite literally leaping off the page.

For Calvin, this has its pluses and minuses. Obviously, he loves having a girl around, especially one he crafted to be perfect for him. On the other hand, he can't write anything about her, or it might change the way Ruby is. In the pro column, he's happy. In the con column, his publisher is not, because the world's best 20-something writer can't be bothered to jot anything down. There is also the trouble that follows an imaginary girl who magically becomes real. How long can it all last?

Ruby Sparks was written by Zoe Kazan, an actress you might recognize if you see her, but not before you recognize her last name: She is the granddaughter of Elia Kazan. Her parents work in the film business, too. So Zoe Kazan was born to be in this position, and she deserves praise for writing her way into it instead of going the celebutante route.

However, her screenplay is hit-and-miss. The comedic aspects work really well, and with the premise, it seems better-suited for the sort of fairly broad comedy that Goldie Hawn might have made with Chevy Chase and Charles Grodin 30 years ago. But it's framed as a romance with comedic touches instead, and that's problematic. The situation the film portrays is too fantastical to be given any real emotional weight.

There are, surprisingly enough, some heavy moments, too. On the heels of Vertigo toppling Citizen Kane on the new Sight and Sound list of the greatest films of all time, Ruby Sparks has an obsessive streak that runs about 15 minutes, echoing James Stewart's molding of Kim Novak to his whims in the Hitchcock classic. It doesn't fit well alongside the rest of the action, and although it's probably the most-dynamic part of the film, the same scenario could be mined for laughs, and it wouldn't come at the expense of the rest of the pieces.

If you have been waiting for Little Miss Sunshine directors Jonathan Dayton and Valerie Faris to make their follow-up, your face must have turned blue about three years ago. It's hard to believe it's been six years since that movie was released, and that's an awfully long time for lower-budget directors to wait before re-emerging. Yet it's hard to see why this is the story that shook Dayton and Faris out of hibernation. It's not entirely original—Stranger Than Fiction used the same device, and in the same year Little Miss Sunshine was released, oddly enough. And despite some nice possibilities, it doesn't really scream, "This is the one!"

Certainly, Dano continues to build on his slow, quiet ascension. Kazan is good, too, without showing anything truly unique. But the comedy wends from direct hit (anything with Dano and his onscreen brother, Chris Messina) to wild haymaker (an odd diversion to visit Calvin's hippie mother and stepdad, played by Annette Bening and Antonio Banderas). The romance is forced—as it would have to be when forced by some kind of providence—and pretty unfulfilling. It's all really a long way to drive for not much of a view.

Ruby Sparks is not showing in any theaters in the area. 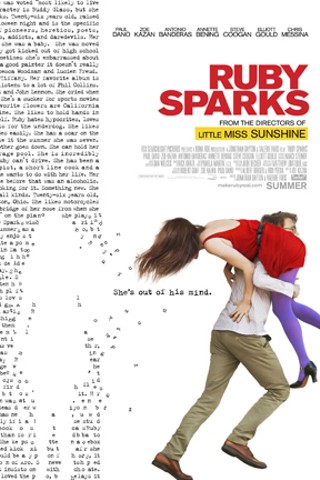