Restoring the right to vote after a felony conviction is possible, you just have to understand the legal process 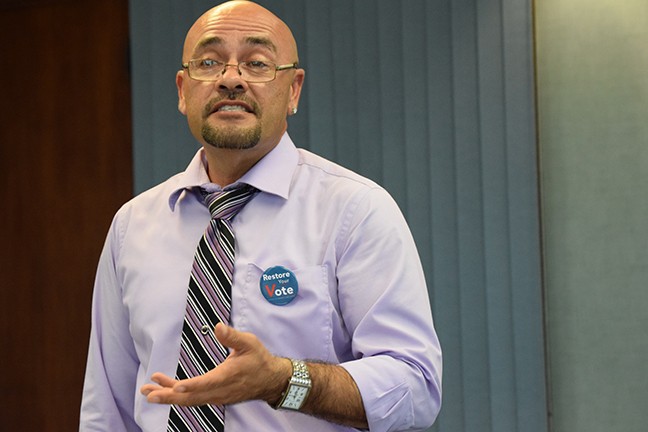 Danyelle Khmara
Manny Mejias, the re-entry coordinator for the Pima County Cirminal Justice Reform Unit and a former felon: “The right to vote gives me a voice.”

Manny Mejias doesn't feel like a full citizen. At 15 years old, he was convicted of first-degree murder. During his 20 years in prison he took stock of his life and grew into an adult vastly different from the teen who committed an awful crime.

He was released 10 years ago. Now he works for Pima County, connecting formerly incarcerated individuals with the resources they need to reintegrate into society. He said when someone first gets out of prison, restoring their voting rights takes a back burner to finding employment and a place to live, both of which can be difficult for former felons, who are barred from many opportunities. Mejias did his time. He's giving back to his community. But he still can't vote.

After he got out of prison, he worked low-paying jobs as a burger flipper, a construction worker and a janitor. Mejias can't petition to restore his right to vote until he's paid his restoration fees, something he never thought would be possible until now.

In Arizona, anyone convicted of a felony has their civil rights revoked, regardless of the crime. In 2016, 4.25 percent of the population, or about 221,000 people, couldn't vote because they had their rights revoked. That number is higher than all our neighboring states. But many disenfranchised people are eligible to restore their civil rights.

The Campaign Legal Center, a nonpartisan, legal nonprofit based in Washington D.C., found that many people nationwide who were eligible to restore their voting rights hadn't because they were confused by their state's voting laws. Some people just thought if you have a felony, you can't vote again. The nonprofit launched the Restore Your Vote project to correct that notion and help people restore their civil rights.

In August, Restore Your Vote launched a user-friendly website that lays out how people can restore their voting rights, step by step. Since Aug. 20, they've directly contacted 445 people in Tucson, working with local voter registration groups like Mi Familia Vota. Of those, 59 people qualified for automatic voter restoration and were ready to register to vote. In Phoenix, they reached 249 people. The project is also on the ground in Las Vegas and Reno, Nevada, and the online tool can be used nationwide.

Laws vary from state to state, and the rules can vary based on number of felony convictions, whether someone was incarcerated or on parole, and whether it was a federal or local conviction.

In Arizona, people who have only one felony conviction automatically get their voting rights restored after they complete their sentence and pay any fines or restitution they owe, according to Andrew Silverman, director of the Civil Rights Restoration Clinic with the University of Arizona College of Law. Silverman said for people who have two or more felony convictions, they need to have their rights restored by the court that sentenced them.

Silverman started the Civil Rights Restoration Clinic with Tucson Mayor Jonathan Rothschild 12 years ago. He said former felons want the right to vote because they just want to be like everybody else, and the clinic has helped over 1,000 people restore their voting rights. Silverman believes that when people complete their sentence, they should automatically get their voting rights back.

Restoration fines can be very high, and formerly incarcerated individuals often don't have a lot of well-paid job opportunities. However, Silverman said it's up to the discretion of the judge on whether to restore a person's rights before they finish paying off their restitution.

Hannah Recht, a Restore Your Vote Tucson organizer, said rules like this disproportionately affect people of color, "keeping more and more communities from actually getting to the polls and making their voices heard on Election Day."

Almost 12 percent of African Americans in Arizona have lost their right to vote, according to The Sentencing Project, a nonprofit that promotes reforms in sentencing policy. And nationwide, they count more than 6 million people who can't vote because of strict felony disenfranchisement laws.

Many people get caught up in the criminal justice system for non-violent crimes, such as substance abuse or crimes related to mental illness. There are currently 216 people in Arizona prisons for marijuana possession who've had their voting rights revoked, according to the Pima County Public Defender Joel Feinman.

"Felony disenfranchisement has a dramatic effect on our elections, not only who can vote in them, but which candidates win them," he said.

Although Restore Your Vote is nonpartisan, restoring voting rights had primarily been a Democratic effort. But Feinman said it shouldn't be a partisan issue and that helping people restore their voting rights "protects and advances democracy."

"No party, no leader, no ideology should promote disenfranchising people unless we absolutely need to," he said. "Whether or not it actually benefits one party or another I don't think is the question. The question is: Do we want to live in a country where because somebody commits a criminal offense, they forever lose their status as a free and equal citizen?"

Over the years, Democratic state lawmakers have introduced a number of bills that would automatically restore people's voting rights upon completion of probation rather than having to petition a judge, but these bills never get to a vote.

Arizona lawmakers introduced five bills earlier this year that would have done just that. There were only two Republican co-sponsors.

Although the deadline to register in the Arizona midterms was Oct. 9, there are continued resources to help people restore their voting rights.

The Pima County Public Defense Services runs a free, weekly legal clinic that helps restore voting rights, among other services. It's open to anyone, on Wednesdays from 9 a.m. to noon and 1 to 4 p.m. at 33 N. Stone Ave. on the 21st floor. For more information, call the pre-recorded information line at 724-2285.

People can also go to RestoreYourVote.org for step-by-step assistance, or contact Hannah Recht at hannah@restoreyourvote.org with questions.