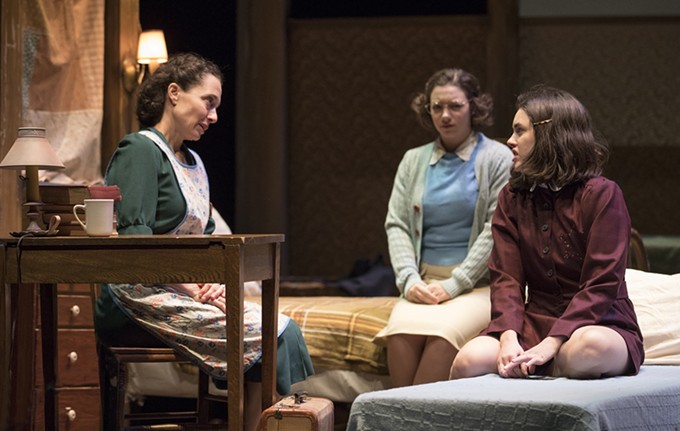 For the final production of their season, Arizona Theatre Company has welcomed back longtime artistic director David Ira Goldstein to direct The Diary of Anne Frank. This Pulitzer Prize-winning play by Albert Hackett and Frances Goodrich, in an adaptation by Wendy Kesselman, is based on the actual experiences of a small group of Jews that, in desperate hopes to avoid the Nazi death camps during World War II, lived for almost two years in a small room above a store in Amsterdam.

The play's story is reconstructed from the actual journal that young Anne Frank kept during the time she was hidden with her family, another small family and a lone dentist. They were attended by good folks who risked their own well-being to bring a scant supply of food and few other necessities to the group whose members grow thinner and more strained and desperate, even as they keep hoping that the war would soon be over and they would be safe.

Anne (Anna Lentz) is in early adolescence when sequestered with her family. At first she is an immature girl with loads of energy and an idea that this hiding thing is a new adventure. She doesn't get along with her mother, Edith (Naama Potok), and at times her liveliness and immaturity are annoying to the others, including the dentist (Michael Santo) with whom she shares a small space for sleeping and for what passes as personal time. To be fair, he can be annoying, too.

The others—father Otto Frank (Steve Hendrickson) and sister Margot (Devon Prokopek), the constantly bickering van Daans (Ann Arvia and John G. Preston) and teenage son Peter (Gus Cuddy)—all struggle to survive the too-tight quarters, the mandated silence during the day when the store is occupied, the parceling of scant food, the entrapment indoors.

Through it all, young Anne writes and keeps her faith in the essential goodness of mankind.

This production gives us a fair feel for the extreme conditions these folks endured for two years and the toll their struggle to bear prison-like circumstances took on them as individuals and as families. This is a co-production with Geva Theatre in Rochester, New York, and they are responsible for the design elements, including the set by Bill Clarke, a sparse but towering space that almost suggests a gallows.

None-too-subtle sound and visual effects mark the group's world getting smaller and smaller.

Performances are surprisingly uneven; some actors, along with their director, of course, have made character choices that work while others do not. But Lentz's Anne, far from being the angelic being we might know from other productions or the movie, is a spirited teenager trying to deal with growing up in such strained circumstances, flawed but heart-driven and convinced of the importance of her journaling. It's a fresh choice for Anne.

It's easy to see why this play is so relevant today in a world that still witnesses widespread distrust, persecution and intended destruction of The Other. ATC's rendering is imperfect, but the strength of the cautionary tale reminds us of our duty never to allow such atrocious beliefs and behavior to taint our world again.

You can pretty much bet there will be big trouble when a father asks his daughters: Which of you loves me the most? Especially when their answers will determine who gets what when dad starts divvying up their inheritance.

But that's what happens in William Shakespeare's King Lear, currently onstage at the Rogue Theatre. With this epic play the group challenges both itself and its audience. The Rogues have responded thoughtfully.

In doing some research and re-reading before seeing the play, I came across this nifty little summary: King divides kingdom, snubs daughter, goes mad, there's a storm and everyone dies.

Of course, this is a slight and thus humorous roundup of the goings-on. But it's not far off.

King Lear (Joseph McGrath), seeking to retire from his governance, decides to divide the kingdom between his three daughters. Regan (Bryn Booth) and Goneril (Kathleen Cannon) profess effusively their great love of dad, but Cordelia (Holly Griffith), Lear's favorite, declines, saying words are inadequate to express her love. This really ticks Lear off, and before you know it, Cordelia is banished to France. Not too much later, Regan and Goneril, now ruling the kingdom with their husbands, whine mightily that they must share the care of their aged father as had been agreed. Lear, realizing he's made a huge mistake, flees into the countryside, finding himself in a big ol' symbolic thunderstorm and then descending (or ascending, depending on our developing understanding of the big picture) into madness.

Meantime, in a parallel story of filial betrayal, the Earl of Gloucester (David Greenwood) has been betrayed by his bastard son, Edmund (Matt Walley), who lies to his dad that his non-bastard brother Edgar (Matt Bowdren), is out to kill him. (This betrayal thing is not unique to daughters, Shakespeare seems to want to point out.) This creates, of course, further complication, with Edgar fleeing and pretending to be crazy and Edmond putting the moves on both Regan and Goneril. What a mess. Lear and Gloucester are each launched into a sort of vision quest to reckon with themselves and what they have done.

Family, betrayal, madness, political chaos, greed, the natural world, a quest for illusive justice—all of these huge meaty ingredients result in a big mouthful for us in the audience.

Rogue's is a respectable production, directed by Cynthia Meier and blending some good performances, solid production values and effective musical accompaniment, composed and performed by Jake Sorgen. We listen, agape at the story, bearing witness to the destruction of everything sane and decent.

But although we watch with horror, it's hard to attach emotionally to these characters, and that's what we generally seek and expect as theater-goers. Here it becomes a much more cerebral exercise as we are challenged to embrace a style of language compelling but unfamiliar to our ears. We are challenged to invest our time and dedicated attention; and we must be willing to bear the burden of the ever mounting heap of trouble upon trouble.

Let's be honest. Not everyone will be willing to do this. It's quite foreign to our theatergoing custom, where 90-minute shows seem to rule the day.

But Rogue's intention is not merely to give us a museum piece. They have worked diligently and artfully to invite us to contemplate the outsized complexities of our humanness that Shakespeare's great story probes.