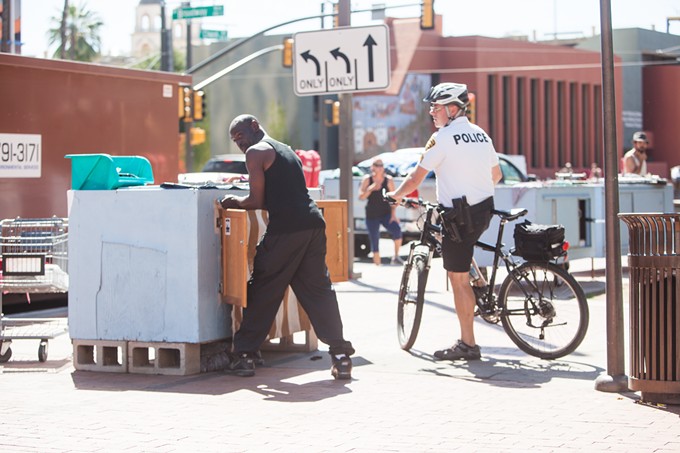 "How many of you hold picnics in the park every day or on special occasions? Why can't the homeless have picnics at the park with the church? We are coming up with all of these laws and sanctions...to make life harder on each and every member that is out there, life is already hard enough," Roy Trout told the Tucson City Council on the evening of Dec. 8.

Shortly after 10 p.m. on that Tuesday, a new set of rules targeting the city's houseless population made it onto the books with a vote of 5-2.

By the second week of January, people won't be allowed to sit or lie on public sidewalks between 7 a.m. and 10 p.m.; when people are allowed on sidewalks, their belongings cannot be bigger than 4-cubic feet; and those interested in feeding (an amendment was added that night to OK distribution of bottled water without a permit) 10 or more people at a park will need a permit—free of charge, good for 10 days, but with the possibility of renewing it for another 50 days—from the city—as long as it's pre-packaged food. Parks will be open until 10 p.m., though, with the idea that houseless people should have a place to be at all times—parks throughout the day, and sidewalks late at night.

The ordinance left many to wonder: Are more prohibitions the best way to deal with homelessness?

For a few months now, Ward 3 Council Aide Brianda Torres has been crafting a proposal for the city that she feels will better address the well-being of the homeless community.

Torres wants to place full-time social workers at public libraries to help people navigate through resources—such as housing options, shelter availability, behavioral health programs, and how to get an ID. The idea is that a social worker will readily be available to sit with them one-on-one. And it'd skip a lot of the bureaucratic red tape that seems to haunt many local homeless outreach organizations.

The social worker idea traveled down to the Old Pueblo from San Francisco's public libraries. Torres was intrigued by the program's success in the Bay Area, and she's determined to do the same in Tucson. It would begin at the public library downtown, and eventually spread out from there.

"It would be a constructive alternative to something like passing more ordinances that frankly don't result in the increase of public safety or security, and further marginalizes our homeless community," Torres says. "This seemed like a more practical approach."

Although the Pima County Public Library can't put a number on it, according to Deputy Director of Public Services Karyn Prechtel a big chunk of a local library's demographic is made up of homeless individuals. Oftentimes, the library serves as the one and only shelter for them.

Prechtel says the library is very interested in collaborating with Torres. At this point, there have been meetings with "super high level brainstorming" to make it happen.

"We try to serve all of our customers in the ways they need help...providing public health for example, which we have in the library right now, is one way to reach other parts of our community, we see [the social workers program] as a natural fit," Prechtel says, referring to the Library Nurse Program that launched three years ago. With that program, Pima County nurses make their rounds at libraries around town, sit down with people of a variety of backgrounds, including those who are homeless or have low-income, one-on-one and address everything from nutrition concerns to blood pressure screenings.

Torres hopes to use existing resources— social workers who already are in the field, but strategically place them at areas that make "geographical sense" like the downtown library, where many of Tucson's houseless people congregate. It's about becoming a trusted and familiar face to that community.

"With some of the outreach places, [homeless individuals] call numbers that are not being picked up...are we missing out on someone who is ready for that support to actually get it?" Torres says. "Having someone at the library would have the resources right there, and the help right there."

Trying to Get Rid of Old Habits

At the City Council meeting on Dec. 8, Ward 3 Councilwoman Karin Uhlich told her colleagues that she would no longer support anything that doesn't add value to the community. Uhlich and Councilman Steve Kozachik, Ward 6, were the "no" votes.

"What we are aiming for with this ordinance route is to get [homeless people] out of sight and out of mind," Uhlich says. It's also walking a fine line that could easily cross into the criminalization of homelessness, she worries.

But Councilman Richard Fimbres, Ward 5, thinks this is a good starting point, especially to continue discussing a balance between public health and safety vs. humane responses to homelessness.

"We are trying to be as reasonable as possible. This is something that I think we found a medium between the businesses downtown, the [social service] providers and the homeless folks themselves," he says.

In an almost monthly basis, Fimbres has been a leading force in hosting meetings at City Hall with other city representatives, Pima County leaders, downtown business owners, social workers, homeless rights advocates and houseless residents—all with the goal to improve resources that are already in place, and create new tools that will help, what Fimbres calls one of the most vulnerable groups of people in our community.

Prior to the meetings, Fimbres says all of these different entities were "doing their own thing." This is the first time everyone involved has come together to discuss the issue and collaborate in possible solutions.

At the November meeting, Torres spoke about her social worker at libraries idea. The response was positive.

Others have discussed homeless camps that could serve as alternatives to shelters, housing options that focus on getting people under a roof prior to demanding sobriety (the Old Pueblo Community Services already have this model), as well as establishing portable bathrooms on the streets, since human waste has been a major concern for the Pima County Health Department and the city.

At the gathering in mid-December, John Jacobs, chairman of the Leadership Committee with Downtown Tucson Merchants, brought up setting up meters throughout downtown (they would be obviously different from parking meters), where people could donate change. The money collected from these meters would then be donated.

Jacobs suggested the funds could go to different organizations, but homeless outreach worker Michele Ream feels using the money to buy bus passes, or distributing it to actual people, might be better. Either way, this is still a pilot. At the meeting, Jacobs said he was getting ready to finish the first meter prototype, and joked about what color it should be. The City of Tucson and the Downtown Tucson Partnership are also behind the so-called Tucson Change Movement, which was influenced by similar programs in Los Angeles and San Diego.

"Homelessness is not a crime, we gotta find balance," Fimbres says. "If everybody comes together, I think we are getting there. We have a lot of great people doing great things. We don't want to hurt the most disadvantaged citizens of our community. We want to work with them."