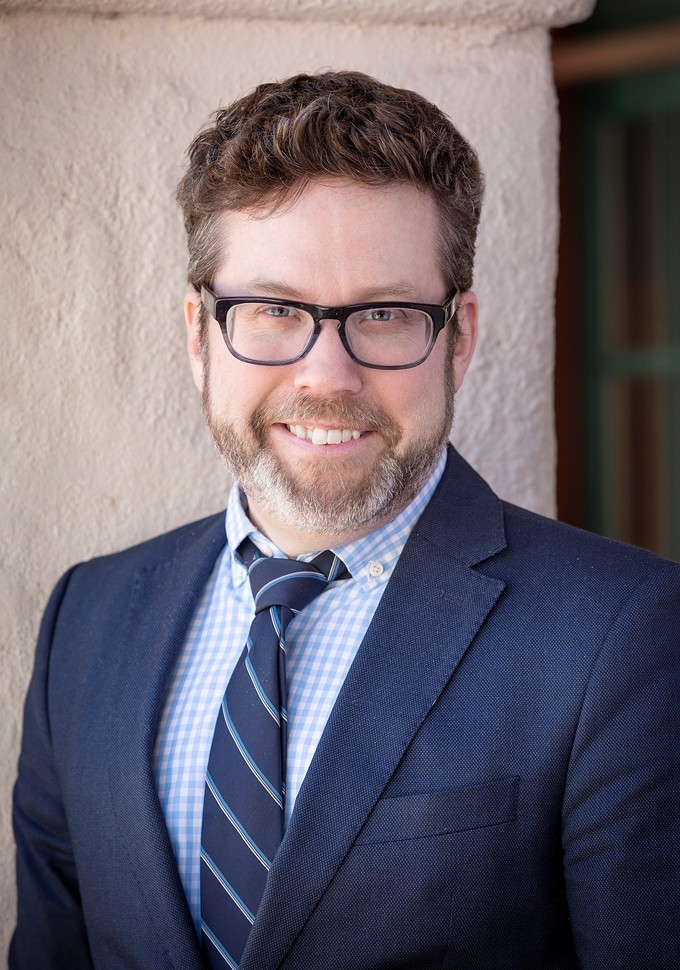 Courtesy photo
Arizona Theatre Company Artistic Director Sean Daniels: “I just think it is a real goal of ours to try to be more locally based.”
For Arizona Theatre Company's new artistic director, Sean Daniels, this is a homecoming. His love of theatre began as a child watching a "life-changing production" of Our Town at ATC. After talking with Sean over lunch at a local downtown eatery, that seems almost too perfect. Our Town addresses a lot—growing up, learning who you are, and finding community, all things clearly important to Daniels, especially in theatre.

And that means representing the community on stage.

"I'm interested in what the conversation is with the community," Daniels says, pointing out that last season's American Mariachi is the best-selling play in Arizona Theatre Company's history.

"And so you have to ask what is that about?" he adds. "Was it just the timing? Was it what the play is about? Or is it that a community is finally seeing themselves on stage where they hadn't before. I'm more interested in what are the next set of plays that help to unlock those questions. It is so powerful to see your story on stage. Clearly it resonated with this community. So how to figure that piece of the puzzle out, for me, that is my job. Invite them in, perhaps in an easy way, in Lowell, with the company I was with before ATC, that was putting on a production by a playwright from the greater community, but then working to do other things the community might be interested in. But you have to genuinely reflect them on stage. You can't just say, 'Now here's a ticket coupon and come see a show where no one looks like you.'"

This season Daniels and his predecessor David Ivers selected six shows that reflect the local community and the issues the greater American culture is facing. And they aren't pulling any punches. This season addresses gender and racial discrimination, challenges stereotypes of masculinity and femininity, asks us to look at white privilege, and then there are the Nazis. "We have an opportunity to have six curated evenings with people. What's the conversation that we want to have with them over time?"

While a lot of the content ATC is bringing to the stage this year covers big, heavy topics, topics that are all too familiar in 2019, these are plays that tell stories about people and what it means to live during challenging times. There may be heartbreak and struggle, but there is joy and laughter. It is important to tell stories like this not because we need the lesson, although maybe we do, but because we need to see that things get better and we keep living.

"And," Daniels added, referencing one of the shows he selected for this season, Women in Jeopardy!, "Looking at the season, I realized we didn't have the show that you just scream in laughter from beginning to end. And that has a value in a season. You don't want six of those. But there is nothing wrong with being entertained by theatre."

Daniels will be considering diversity and representation in the casting process too, "You have to think about your own biases that you bring. Could anyone play this role? Do I want the best actor? Do I believe that white actors are the only actors who can play all types of roles and actors of color are the only ones that can play those types of roles? Then find the best actors to pull it off. If you start with that you don't end up with all white casts."

Having a season that ranges from "Master Harold"...And The Boys, a show that looks at privilege in apartheid South Africa to The Legend of Georgia McBride, a musical about a drag queen, to classics like Cabaret, this season has a lot to offer.

"That's the point of being a season subscriber. You get to watch shows you wouldn't have picked. In an era of Netflix and Amazon the algorithm has you figured out. It knows that based on your buying pattern, you would like this media, this item. And you're always like, 'You don't know me!' But then you look and you're like, 'Yeah, I probably would like this...' There is nothing wrong with that, but the thing I hear from subscribers is they come to shows they wouldn't have otherwise watched and ended up liking it. If you pick only what you know, you are only going to get that."

There is more to diverse theatre than breaking free of an algorithm. "Sometimes I chose something thing because it allows a group of people who don't look like you to finally see themselves on stage and be invited in. As an audience member maybe this play isn't your favorite but that's okay because you believe in this theatre and you want it to be around in 40 years and introducing a new audience to the theatre is important." And for someone who, some years ago, realized theatre was his dream at an ATC production, fostering the continued success of the theatre and encouraging new audiences to check out the theatre is a key driver.

But if you can't catch the whole season? Daniels recommends that you don't miss the first two shows: The Royale and Silent Sky. The first tells the story of the first time black and white boxers were allowed to box against each other during Jim Crow. The second looks at women in science, following the story of Henrietta Leavitt, a brilliant astronomer who made most of her discoveries (including where we are in the universe) without access to telescopes because of gender discrimination. It would be naive to say things haven't improved in the hundred plus years since either event, but it would also be naive to say these problems have disappeared.

But it isn't just that these are societal problems we have to face together that make Daniels recommend them but because the playwrights, Marco Ramirez and Lauren Gunderson, respectively, are interested in working here, in joining the community and learning from the Arizona audiences who will be experiencing their work. That is something special.

"I just think it is a real goal of ours to try to be more locally based," Daniels says. "I am really focused on how this community owns us."