Prodigies and pros perform baroque, Broadway and of course, Beethoven

TSO has more events going on than we can fit in the paper, so we've just included events from their Classic, SuperPops and Masterworks series in this roundup. But check out their website for more info on special events (including a screening of ET with live orchestral music) and their holiday performance of Messiah. All performances are at the Tucson Music Hall, 260 S. Church Ave., unless otherwise noted. 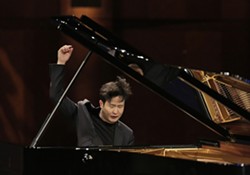 Courtesy photo
Pianist Yekwon Sunwoo, the 2017 Gold medal winner of the prestigious Cliburn Competition, with join the Tucson Symphony Orchestra for a performance of Beethoven Symphony No. 7 in September.

Beethoven Symphony No. 7. Talk about a throwback! The very first concert the Tucson Symphony Orchestra put on, Jan. 13, 1929, featured this piece. And when Beethoven premiered it back in 1813, even he said it was one of his best works. This evening features pianist Yekwon Sunwoo, the 2017 Gold medal winner of the prestigious Cliburn Competition. Beethoven's Piano Concerto No. 3 in C Minor and Bach/Webern's Fugue for Six Voices from Musical Offering are also on the schedule. 7:30 p.m. Friday, Sept. 20 and 2 p.m. Sunday, Sept. 22.

Symphonie Fantastique. The feeling of unrequited love is almost universal. Less universal is the feeling of falling so in love with an actress that you write her a whole symphony about the bittersweet highs and opium-induced lows of unrequited love, which causes her to fall in love with you upon listening to it. But we can't all be Hector Berlioz. It's psychedelic and intense, even stressful at times, but always beautiful. Also on the schedule are Ravel's Minuet Antique and Torke's Sky, Concerto for Violin, a TSO-commissioned piece making its TSO premiere. Perry So conducts and Tessa Lark is the violin soloist. 7:30 p.m. Friday, Oct. 25. 2 p.m. Sunday, Oct. 27. 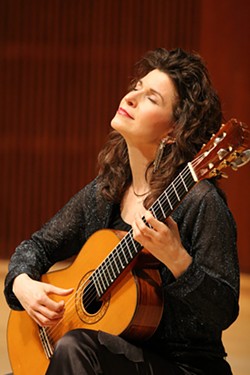 Beethoven's Fifth. Even if you never, ever listen to classical music, we promise you've heard Beethoven's Fifth. It's the theme song to Judge Judy! It came preloaded as a ringtone onto your cellphone from 2008! It's one of the best-known symphonic compositions in the world! Tonight also features Antonio Estévez's Mediodía en el Llano—the Venezuelan composer's most popular piece—and Cliburn award-winning pianist Sean Chen playing Saint-Saëns' Piano Concerto No. 2. 7:30 p.m. Friday, Dec. 6 and 2 p.m. Sunday, Dec. 8.

Beethoven Symphony No. 4. So, we just talked about Beethoven's Fifth Symphony, one of his most famous. This one is probably his least famous, probably because it's a little bit more understated. But it's certainly worth listening to. Berlioz loved the second movement so much he said he was positive an angel must have composed it. You'll also hear Séjourné's Conceto for Four Marimbas and Strings, "Gotan." Séjourné is a modern composer, and this piece has four percussionists playing mostly marimbas. 7:30 p.m. Saturday, Oct. 5 and 2 p.m. Sunday, Oct. 6. Catalina Foothills High School, 4300 E. Sunrise Drive.

All the World's a Stage. Tonight, Aram Demijian conducts music from operas, plays and ballets. Rossini's overture to The Italian Girl in Algiers is so much fun it's almost funny. Haydn's Symphony No. 60 in C Major, "Il Distratto," ("The Distracted") makes use of music he wrote for a play by Jean-François Regnard. Caroline Shaw won the literal Pulitzer Prize for music at the age of 30(!) in 2013 for her Entr'acte. And Stravinsky himself described his Pulcinella Suite as a transformative work in his career. 7:30 p.m. Saturday, Nov. 9 and 2 p.m. Sunday, Nov. 10. Catalina Foothills High School, 4300 E. Sunrise Drive.

Broadway to the Sunset Strip. Buckle up, musical theater fans. Susan Egan is coming! And it's not only her (for those not in the know, she originated the role of Belle in Beauty and the Beast on Broadway), but Doug LaBrecque, who played the Phantom, and Lisa Vroman, who played Christine, both in Phantom of the Opera on Broadway. These three stars will be performing Grammy, Tony and Academy Award-winning songs from New York to L.A. in an event that will have your heart soaring as high as their voices. 7:30 p.m. on Saturday, Oct. 12, and 2 p.m. on Sunday, Oct. 13.

The Texas Tenors: Deep in the Heart of Christmas. Ho ho ho! This Emmy Award-winning, Billboard #1 recording group is sleigh riding into town just in time for Christmas. They've got holiday classics like "O Holy Night" on the agenda, as well as original hits like "Bootdaddy," which may be stuck in your head for the rest of your life—and your life will be better for it. No matter the song, their harmonies and arrangements will have you in the holiday spirit in no time. 7:30 p.m. Saturday, Dec. 21 and 2 p.m. Sunday, Dec. 22.

All performances at the Leo Rich Theater, 260 S. Church Ave., unless otherwise noted.

Russian String Orchestra. This group of some of Russian's finest young string players, with a repertoire of more than 1,000 compositions, has been around since 1991. The Moscow-based ensemble is traveling all the way to Tucson for this performance to play Paul Hindemith's Five Pieces, Op. 44 No. 4, Alfred Schnittke's Concerto Grosso No. 1 and Antonín Dvořák's Serenade in E Minor for Strings, Op. 22. Come see this performance—chills guaranteed. 7:30 p.m. Wednesday, Oct. 23. $30 adults or $10 students.

Naumburg Trio. The Naumburg Competition is one of the world's oldest and most prestigious music competitions, and gives annual awards to young, North American classical musicians. All three members of this trio—violinist Frank Huang, cellist David Requiro and pianist Gilles Vonsattel—have won it. So you can imagine this is going to be good. They'll be playing piano trios by Beethoven, Shostakovich and Schubert, as well as Elliott Carter's Epigrams. 7:30 p.m. Wednesday, Nov. 20. $30 adults, $10 students. 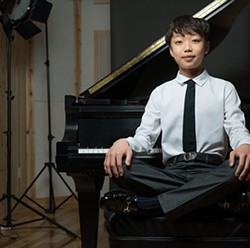 Courtesy photo
Prodigy Nathan Lee, who won first prize in the 2016 Young Concert Artists International Auditions when he was just 15, will be joining the Arizona Friends of Chamber Music for a November concert.

Nathan Lee, Piano. To directly quote the AFCM website, "the last high-school-age pianist we discovered for our series was a kid named Lang Lang, and you know how he turned out." They make a great point. Young Nathan Lee won first prize in the 2016 Young Concert Artists International Auditions when he was just 15, and he's since gone on to perform with the Seattle Symphony, Cleveland Orchestra and Minnesota Orchestra, as well as debuting at the Kennedy Center. Hear him play Bach's Italian Concerto, BWF 971; Beethoven's Piano Sonata No. 27 in E Minor, Op. 90; Chopin's Scherzo No. 2 in B-flat Minor, Op. 31; and Schumann's Carnaval, Op. 9. 3 p.m. Sunday, Nov. 24. $30 adults, $10 students.

Takács Quartet. AFCM has big plans for 2020, the 250th anniversary of Beethoven's birth: They plan to program all of his great string quartets. But they're sneaking in a few of them early with this performance by the Takács Quartet, which features Edward Dusinberre and Harumi Rhodes on violin, Geraldine Walther on viola and András Fejér on the cello. This group performs 80 concerts a year all over the world, and is currently in its 45th season. 45th! They will be playing Beethoven's String Quartets No. 6 in B-flat Major and No. 9 in C Major, op. 59 No. 3. And they'll start the night off with a piece by one of Beethoven's teachers, Haydn: String Quartet in C Major, Op. 33 No. 3, "The Bird."

Heinavanker: Terra Mariana. Estonian vocal ensembles are recognized as some of the best in the world, and Heinavanker has represented this tradition for the last 30 years by performing all over the world. For their third performance in Tucson, the six-member group will be singing music dedicated to the Virgin Mary. The repertoire will range from Franco Flemish composers Johannes Ockeghem and Jacob Arcadelt to Mikolaj Radomski, a 15th century composer for the Polish royal court. Hear, hear! 3 p.m. Sunday, Oct. 13. St. Philip's In the Hills Episcopal Church, 4440 N. Campbell Ave.

Fretwork with Countertenor lestyn Davies: Silent Noon. The London Evening Standard once called Fretwork "the finest viol consort on the planet," and are particularly renowned for their recordings of some of Bach's work. lestyn Davies is one of those Grammy-winning artists who can do such incredible things with his voice that no one begrudges him his preference of not capitalizing his first name. This program is named after Vaughan Williams' setting of Christina Rossetti's poem, "Silent Noon," and features music by Gesualdo, Byrd, Lawes, Handel, J.C. Bach and Vaughan Williams, all designed to make you open both ears and heart to contemplate life, death and everything in between. 2 p.m. Saturday, Nov. 2. Grace St. Paul's Episcopal Church, 2331 E. Adams St. 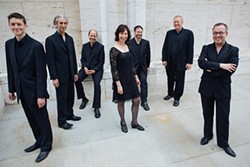 Courtesy photo
Quicksilver Baroque performs “Fantasticus–Extravagant and Virtuosic Music from 17th-Century Germany” in December at St. Philip’s in the Hills.

Quicksilver Baroque: Fantasticus–Extravagant and Virtuosic Music from 17th-Century Germany. You may not quite remember it firsthand, but things were pretty wild and unpredictable in 17th-century Germany. Composers at the time took some inspiration from their Italian counterparts by letting their imaginations run free in sonata form, creating wordless conversations through music. Mathematician Athanasius Kirchner said the style was "instituted to display genius." Quicksilver, an ensemble featuring some of the top performers in North America, will be playing pieces in this style by Weckmann, Buxtehude, Kerll, Vierdanck, Bertali and Schmeltzer. 3 p.m. Sunday, Dec. 8. St. Philip's In The Hills Episcopal Church, 4440 N. Campbell Ave.

Performances are at the Temple of Music and Art, 330 S. Scott Ave.

Shining Brow. OK, so you know Frank Lloyd Wright, the architect who designed that house "Fallingwater" and basically changed the nature of architecture (in part by using nature in architecture) forever? This is an opera about his life. One look at Wright's Wikipedia page, where headers include things like "Family abandonment," "Catastrophe at Taliesin studio" and "Divorce and further troubles" will have you thinking, "This is definitely material worthy of an opera." How does a man rebuild his life and continue pursuing his passion? There are many ways to find out, but an operatic one is sure to be the most interesting. 7:30 p.m. Saturday, Oct. 5 and 2 p.m. Sunday, Oct. 6.

Fellow Travelers. Based on a 2007 novel by Thomas Mallon, this opera takes place during the McCarthy-era Lavender scare. Let's set the stage: When Timothy Laughlin, a young, ambitious college grad, meets Hawkins Fuller, a U.S. State Department official, he finds both his first job and his first love affair. So he must choose: his political convictions or his love? This story explores the idea of how much bravery it sometimes takes just to be yourself, and is set to music by Gregory Spears and a libretto by Greg Pierce. 7:30 p.m. Saturday, Nov. 16, and 2 p.m. Sunday, Nov. 17.

European Guitar Quartet. The Tucson Guitar Society and Lead Guitar are putting on this event with UA Presents featuring four musicians who are almost intensely virtuosic. Zoran Dukic, Reentko Dirks, Pavel Steidl and Thomas Fellow blend the concert tradition of the guitar with the expressive sounds of modern music in their interpretations of pieces by folks like Astor Piazzolla, Nicolo Paganini and Agustín Barrios. They also play original pieces! Whether you're an expert guitar player yourself or you just like pretty music, this show will knock your socks off. 7:30 p.m. Wednesday, Nov. 6. Centennial Hall, 1020 E. University Blvd.