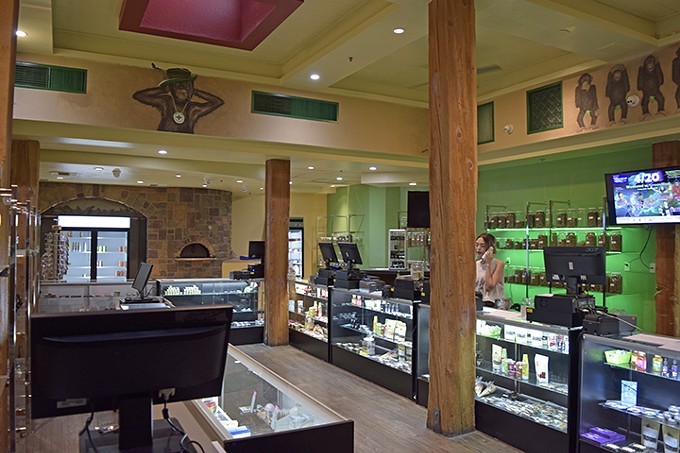 After months of discussions, the Tucson City Council last week updated the city's zoning code related to cannabis dispensaries, opening a wide swath of potential locations to an expanding and lucrative business sector.

In a unanimous vote at the Tuesday, April 6, Tucson City Council meeting, council amended its Unified Development Code Related to Medical and Adult Use Marijuana Dispensaries in order to expand cannabis business opportunities and to come more into line with zoning codes in other states where marijuana has been legalized.

The changes to the UDC are as follows:

• Remove the restriction on drive-thrus for marijuana facilities;

• Add Marijuana Dispensary Off-site Manufacturing Location as a new use;

• Amend language in the ordinance so that the regulations address both medical marijuana and adult use marijuana;

• Reduce separation from sensitive uses to align with how marijuana is treated in other states that have legalized recreational marijuana; and,

• Add an option for Mayor and Council Special Exception for stand-alone adult use licenses (aka "social equity licenses") to reduce setback requirements.

The change that will likely have the biggest effect is the reduction of "setback," the amount of distance between dispensaries and "sensitive use" establishments—schools, churches, parks, in-patient rehab facilities and libraries—and dispensaries to each other.

Setback has been reduced to 500 feet, while the distance between dispensaries has been increased to 2,000 feet to avoid clustering of pot businesses. The state minimum for cannabis establishments is 500 feet, but for alcohol-related businesses it is 300 feet.

The reduction of setbacks will open up several thousand parcels for cannabis-related businesses, up from less than 2,000, in locations that may be more appropriate, such as strip malls or other business districts with ample parking and amenities, rather than neighborhood locations that have been inundated with crowds seeking legal adult-use pot in the wake of sales beginning in January.

Council also gave itself an option to revisit setback distances in the future once the Arizona Department of Health Services gets the social equity rules in place, but there is no timeline for that to occur.

Much of the discussion on the issue has taken place over the course of the past nine months beginning last August. A study session prior to last week's council meeting hammered out most of the details, but much of the discussion that evening addressed concerns about 26 social equity licenses—essentially, licenses for minority applicants because those groups have been unfairly targeted for drug enforcement in the past. Those licenses, created by last year's initiative that legalized adult use of cannabis, will be distributed by the state once the rules are in place.

Tucson Mayor Regina Romero set the tone early, asserting her desire for the city's input to be part of the AZDHS process creating the social equity rules. In order to apply for a dispensary license, applicants must pay a non-refundable $25,000 fee and demonstrate they have $500,000 in liquid assets, putting dispensary ownership out of reach for much of the population social equity licenses is meant to serve.

"In Tucson, for the most part, the market consists of small, locally owned business owners, but we also have industry heavyweights that are eyeing Tucson and the state of Arizona with this adult-use issue," Romero said. "Right now the system is very favorable to industry giants through exorbitant application fees, and many minority communities simply lack the access to capital that the current system demands."

She then proposed a temporary halt on single-use and social equity dispensaries until the rules have been established by the state.

"We want these businesses here, that's not the issue," Romero concluded. "This is a temporary approach so that we can provide input and to see what the rulemaking process with AZDHS looks like."

Romero wants to be part of a multi-city movement to participate in the rulemaking to ensure the program works the way it is intended.

"The City of Tucson is making a collective effort to center equity in their processes and that implies allowing an opportunity to plan appropriately for new licenses regardless of how many are expected in the City of Tucson," she said. "Both the City of Tempe and the City of Flagstaff are exploring temporary halts for the social equity license for the same reasons that I am bringing this to you today. The goal is to make this a multi-city effort to rein in some local control for these social equity licenses. Social equity, in my mind, would include promoting workers' rights and how they put these rules together."

What the discussion ultimately came down to was opening up restrictions for existing dispensaries to have the opportunity to relocate to "more appropriate locations" throughout the city.

Councilmember Steve Kozachik (Ward 6) echoed the mayor's sentiments about the barriers to small business owners getting one of the few licenses that will be available, but stressed the benefits of opening up more locations.

"Mom and pop down the street are not going to empty that cookie jar and make that application," he said. "I'm not sure how we get our voice in that conversation because AZDHS is the one that's going to set the rules.... By our changing the current setback requirements, we're opening the door not only for existing [dispensaries] to move to more appropriate locations, but we'll be providing locations for the eventual licensees so that they're not restricted. If they're operating under our current rules right now it wouldn't matter how many licenses they issued, there's nowhere for them to go."

Ward 2 Councilmember Paul Cunningham, who was ready to put planning commission proposed changes in place from the outset, said the setback changes were necessary to address some of the mistakes that were made more than a decade ago, when medical marijuana was first legalized in Arizona.

"We've had a situation in the past where we've not approved a dispensary for a place that would have been a good place," he said. "Dispensaries unintendedly end up in kinda weird places, like tucked in the middle of a neighborhood or something."

Kozachik added that while those zoning codes were created out of caution, what has happened with the marijuana business necessitates a new way of thinking about the effects of municipal zoning.

"When we adopted the existing setback requirements 10 years ago, we were looking at Colorado, worried about what was gonna happen, Reefer Madness and we're all going to see a headshop on every corner," he said. "Now we've seen that what we effectively did was that we created such restrictive setbacks that the site is choosing the use instead of users coming out and selecting the appropriate site."

He added that there are "vacant storefronts all over the community right now with a boatload of parking in the middle of shopping centers."

Cunningham added that there would be fallout from the community no matter what decision the council came to, so they should make as bold a move as possible.

"It doesn't matter which option we pick, someone's going to call up and they'll be mad about where we put the dispensary," he said. "We're just going to have to accept that and do the best we can with the information we have."

Local advocates see the zoning amendments as good economic sense that help further the intent of Prop 207 and add jobs and tax revenues to the city's coffers.

Downtown and D2 Dispensary owner Moe Asnani supports what the city is doing, as the cannabis industry looks to be a big job creator in the coming years.

"I think it is one of the best things mayor and council could have done for Tucson," Asnani wrote in a recent text message. "We are at the beginning of a cannabis renaissance statewide and the nation is about to come around: This move will create thousands of jobs in Southern Arizona."

"We appreciate the city accommodating the dual licensees with more square footage for their medical and adult-use operations. We are also grateful to the city for adding drive-thrus as well as allowing dual licensees the opportunity to move their locations," he said. "We truly appreciate the city's awareness of the potential for the social equity program to be 'gamed' by large operators and are excited that this delay will result in the City of Tucson facilitating adult-use social equity licenses to only those who are truly deserving of participation in the social equity program."

The city does not have a lot of control over regulation of cannabis dispensaries, and is limited to land use, dispensary size and dealing with complaints from the public. The odor mitigation update creates clarity on how the city responds to complaints.

"This gives us clarity as to how to respond to that," Tucson's principal planner Dan Bursuck said last week prior to the council meeting. "So if someone from a neighborhood files a formal complaint, it requires us to do an inspection to see if they're meeting [their odor mitigation] plan."

Even if Tucson gets some of the social equity licenses, Bursuck does not expect the overall number of shops to be more than 15 or 20. There are currently 13 licensed dispensaries in the city's sphere of influence.

While many smaller, more conservative communities in the state have moved to restrict the marijuana business as much as possible, the City of Tucson has embraced it as a legitimate and growing business.

Tucson's Planning Commission has been working on updating the UDC since last August and Bursuck said it has been a "quick timeline for a code amendment," but that council wanted to address the issue as soon as possible because things are changing so fast in the industry.

The year 2020 saw a big increase in economic activity in the sector, from $700 million in total medicinal sales in 2019 to topping $1 billion in 2020, according to Leafly, an online information clearinghouse for the marijuana industry.

There was an attendant job bonanza, with Arizona adding 5,648 jobs in 2020 to bring the total to 20,728 individuals employed in the sector. That number is only expected to grow as the industry expands over the course of the next several years.