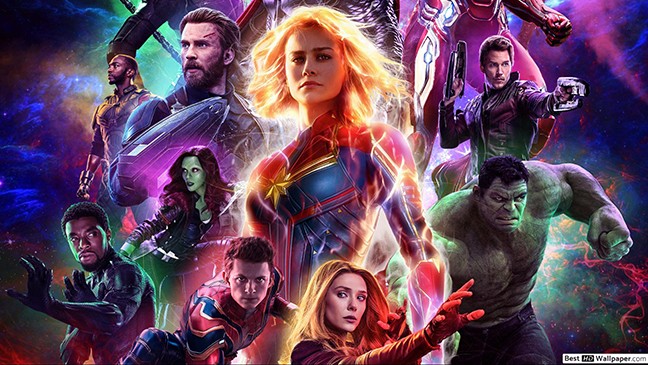 The Marvel universe gets its most grandiose chapter with Avengers: Endgame, a fitting successor to last year's Infinity War and a generous gift to those of us who like our movies with superheroes in them.

When last we saw Tony Stark (Robert Downey, Jr.), he was a survivor of the dreaded Thanos (Josh Brolin) finger snap, a universe-altering occurrence that took out half its living creatures and provided for that tear-jerking moment when Spider-Man (Tom Holland) and many others turned to dust.

Endgame picks up where that action left off, with Stark floating in space and keeping a video journal of his inevitable demise, having run out of food and water. Captain America (Chris Evans), Black Widow (Scarlett Johansson), Bruce Banner (Mark Ruffalo), Thor (Chris Hemsworth) and Rocket (Bradley Cooper) are among the other survivors, dealing with the repercussions of so much death on Earth, just like Justin Theroux in The Leftovers.

Oh, there are tons of questions this movie needs to answer in its three-hour-plus running time. Where's Thanos? Where's Hawkeye (Jeremy Renner)? Is Tony permanently marooned in space? What's been going on with Ant-Man (Paul Rudd) during all of this Thanos hullabaloo? Is everybody really dead? Does Star Lord (Chris Pratt) still have his Walkman in the Great Beyond?

Good news: the movie answers many of your questions and more thanks to another well-balanced screenplay and a crack directorial job from the team of Anthony and Joe Russo. When you leave Endgame, your belly will be happily full of cinematic satisfaction.

How do I really talk about any of this without becoming the Spoiler King? I can tell you that the movie is the second one this year that borrows a lot from Back to the Future 2 (after Happy Death Day 2U). I can tell you that the Hulk undergoes a fantastic wardrobe change. I can tell you that the New York Mets, my favorite baseball team, have been decimated by the Thanos snap, not unlike when Fred Wilpon took over sole ownership of the franchise in 2002. I could tell you that Rocky Racoon comes face to face with his creator, Paul McCartney, and eats Macca's foot, but that would be a lie.

I can also tell you that it all zips by in spectacularly entertaining fashion and that very little of it misses the mark. There are a few moments when it's evident that all of the stars aren't in the same place, their presence pasted together through the power of special effects and creative cast scheduling, just like that lackluster season of Arrested Development where all of the participant schedules didn't align. This is a forgivable offense; no chance you are going to get a cast this size in one room at the same time. Help us, CGI.

In the middle of all the action and plot developments, Downey, Jr. delivers another soulful, endearing performance, well beyond anything you would've expected from a Marvel movie before he started showing up in them. Chris Evans continues to rock, something that truly began with Captain America: Civil War, where Cap went next level. Hemsworth and Ruffalo continue to explore more humorous variations of their characters, and both are a total crack up.

Are the Marvel movies anywhere near over with Endgame? Don't be silly. James Gunn just got his job back as the director/commander of the Guardians of the Galaxy, Captain Marvel is just getting started and Spider-Man's next adventure will enter your face before the summer is done.

Have some of the more popular story arcs within the Universe reached their conclusions? Maybe. I'm not telling. Set aside a 1/8th of one of your days, set yourself down, enjoy the ride and get some answers.

But, for God's sake, don't take your kids to shows past 8 o'clock, unless you fancy those long rides home from the theater where your kids are crying because they fell asleep and missed the whole thing.