I saw Sean Connery strangling some girl with a bikini, and that freaked me out. The bleeding eye after the gunshot gave me nightmares. Then Bond's face changed into that Roger Moore guy, and I became confused and even more disinterested. I preferred the Pink Panther movies.

I don't think I've ever seen a Timothy Dalton Bond movie all the way through, but I did think Pierce Brosnan was decent enough in the role. His Bond movies got me liking the character a little more, to the point where I could go back and enjoy the Connery films. I still think Moore sucked.

Daniel Craig's Bond is a different animal altogether--and he's my Bond of choice.

Quantum of Solace picks up where Casino Royale left off. Craig's Bond is hellbent on vengeance for the death of Vesper Lynd (Eva Green), and despite orders from supervisor M (Judi Dench) to chill out, he's going on a killing spree. This Bond film is about straight-up action, with little mercy.

Director Marc Forster (Finding Neverland), like Martin Campbell with Royale, is shooting for something a little more realistic with this Bond. Sure, the guy is almost superhuman as he leaps across rooftops, blasts through fiery walls and survives major hails of machine-gun fire. What's missing from these Bond installments is that campy science-fiction element: no volcano headquarters, no space stations, no ridiculous spying gadgets. Bond has been grounded in reality.

Yes, this violates tradition, but perhaps it's time for a change. There are a few nods to the Bond of old, but even when he stops for a martini, he's not sipping them in a sophisticated manner--he's pounding them to counter his grief. A victim gets coated in oil, with her dead body resting face-down on a bed--the polar opposite of the dead woman in Goldfinger. Women still find strange ways to die in the Bond movies.

As for the villain, he's just a real guy working out of a dock with no laser guns or spaceships. Dominic Greene (Mathieu Amalric) is an evil businessman and part of a worldwide secret agency responsible for wars, economic turmoil, etc. His big plot is to control Bolivia's water supply and drastically increase utility costs. OK, so that's not all that exciting, but it does have a nasty sense of realism to it.

Solace blows it with the Bond girl. Olga Kurylenko is a dud as Camille, a woman bent on revenge for the death of her family. She has zero chemistry with Craig, and a leaden line delivery that makes you wish the action would move away from her and back to Bond. She stands as the movie's largest flaw, and it's a crucial one.

In a way, Solace and Royale are origin stories for Bond. Giving Bond a little more edge will make him a more versatile character if the franchise chooses to stay with Craig as he gets a little older. My thoughts are that as his body slows down a bit, Bond will get some more of that cool, calculated sophistication back. Right now, he's all about breaking necks.

Forster, a versatile director, shows he knows his way around an action scene. There are occasional moments when the action gets a little confusing due to extreme quickness, but things largely remain coherent. I especially liked a couple of hand-to-hand combat moments, including a scene with Greene brandishing an ax.

Quantum of Solace isn't as consistently good as Casino Royale, but it does stand as a decent companion piece and an intriguing next step in the evolution of Bond. Right now, romance and special gadgets aren't on this super-spy's mind.

Quantum of Solace is not showing in any theaters in the area. 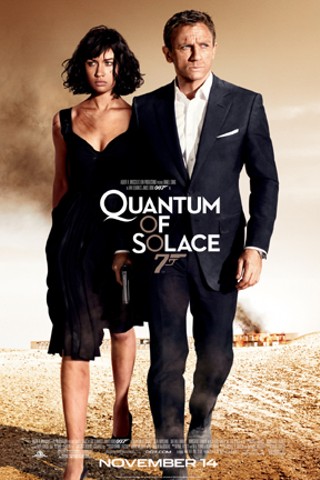