Photo by Julius Schlosburg
Last year's hip hop festival had over 1500 attendents, panelists, vendors, artists and media. This year promises to be even bigger. 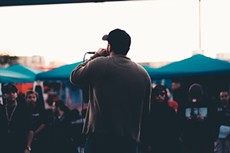 They thought it could be big but were nonetheless inspired by the outpour of community interest and support. This year, along with a rock-solid team, they focused on making a festival that's even more innovative than before.

"This year's focus is making it more of an experience," Valencia says.

New collaborations will help achieve that, like with The Underestimated City's popup clothing shop, Tucson Foodie's food court and The Loft Cinema's hip-hop films and documentaries, all on Toole Avenue.

The downtown Toole block will be closed to traffic and bedecked with five graffiti stations where choice writers will be live graffing; outdoor stages where local and national talent will be breakdancing, doing live beat production and rapping; an all-day DJ tent; rap battles and two indoor rap stages.

And like last year, there will be panels where people in the industry will talk about an array of topics, like how to market your talent and the deeper meaning of hip hop. But this year, THHF is bringing in some bigger industry names.

Another addition this year... after party! At Solar Culture with nine additional acts, until 2 a.m.

In this package, you'll find a list of must-see acts at Tucson Hip Hop Festival and stories that dig deeper into the heart and soul of the people that make it real.

Romero created the festival, in part, because he saw talent in the Tucson scene and wanted to help it grow. Valencia says she got involved because she likes "creating those opportunities and cultivating those resources for artists." They both wanted to create something that brought together all the hip hop elements in one place.

But when you break it down, there's one underlying reason for the birth and growth of the Tucson Hip Hop Festival, and Romero says it best: "We just love hip hop."

Friday Workshops
Friday workshops are free and in partnership with the Dunbar Center (325 W. Second St.), which is hosting the talks. The discussion format will include 50-minute talks led by community members, from 1 to 4 p.m., with two workshops going simultaneously following two tracks: perspective and platforms in the music industry.

"She Walks the Line: A Discussion on Female Writers"
Graffiti artists Robin Troncoso and Christel Benzen will be talking about Southwest culture, train graffiti and being a female graff writer and bencher (connoisseur and/or photographer of train graffiti). 2 p.m. Friday.

Courtesy
Michael Tolle
"Properly Utilizing and Monetizing off Bandcamp" UA grad Michael Tolle began his record label Mello Music Group out of his home in 2007 with nothing but a laptop. In 2016, Forbes labeled it the most successful indie-rap label of the decade. Tolle figured out how to turn his passion for music into a successful business, a platform that MTV described as having a dedication to intelligent lyrics about real-life issues, and a revenue stream for the artists he records. Hear him share a bit of wisdom about using Bandcamp to make your own artistic dreams a reality. 3 p.m. Friday.

"Barrio Sustainability, Art and Rebellion"
Coming with a vital perspective, members of the arts and sustainability group Flowers and Bullets will talk about working for a healthier, more inclusive, empowered community using the arts, culture, food and engagement. Flowers and Bullets teaches sustainability through food gathering, gardening and water harvesting with underserved youth and communities, as well as creating artistic outlets for young people of color. 3 p.m. Friday.'

Saturday Panels
The Saturday panels, in the Exploded View Microcinema (197 E. Toole Ave.), are supported by the UA College of Humanities and will feature prominent voices in hip hop followed by Q&A. These 60- to 80-minute panels are meant to broaden people's understanding of how the industry works and how they can market their talents and expand their reach. From 1 to 7:30 p.m.

"Exploring the Meaning of Soul in Hip Hop"
Professor of Hip Hop Alex Nava gave a talk at the first incarnation of THHF, the Tucson Hip Hop Summit. When his moving talk was over, the audience clamored for more. The author of In Search of Soul: Hip Hop, Literature and Religion studies the intersection of religion, spirituality, culture and hip hop. His talk is sure to inspire a bit of soul searching in us all. 2:10 p.m.

"Womxn in the Hip Hop Industry: Blogger to Multi-Media Personality"
Ashley Outrageous launched her hip-hop+ blog in 2008 and has since turned herself into an event producer, marketing specialist and media mogul. It'd be hard to find someone better than this bad-ass lady, killing it in a male-dominated field, to talk about women in hip hop. Check out her blog at ashleyoutrageous.com. 6:10 p.m. Saturday.


Graffiti Artists
Twenty graffiti artists will be writing on several outside panels, on Toole Avenue, over the course of festival, from noon to 9 p.m. They're all unique, but here are just a couple virtuosos to checkout.

Plak is a 23-year-old graff writer, studying architecture in Sonora. He's got nine years of experience creating incognito art on walls, under bridges and on trains, as well as public murals. Check out his work at instagram.com/tonyplak and facebook.com/plakquest.

Lady Rise has a standout style, marked by a spirit of resistance, born out of her childhood surrounded by families of migrant farm workers. Her work expresses the voices of people who work the land as well as feminine expression, including portraits of women throughout history and her life who inspire her. She's been seen writing walls with Neoglyphix, an indigenous graffiti-art collective.


Producers
Producers will be creating beats using a variety of sounds, samples and digital tools, in 20-minute sets from noon to 8 p.m., on an outside producer stage.

Mac-sama! creates jazzy booze-infused beats with samples from TV shows and '60s pop as well as futuristic, anime-inspired dance-producing rhythms. Check out Mac-sama! at soundcloud.com/mac-sama and catch his set at 1:30 p.m.


The child of immigrants, DJQ's music is influenced by Chicano culture and Tucson's south side, where DJQ grew up. A member of the music collective Ojalá Systems, Q's beats include samplings of Javier Solis and Smokey Robinson as well as local rappers and cyphers. Check out Q's music at soundcloud.com/2ueue and catch the set at 3:30 p.m.

Altrice is a beat producer with deep roots in the Tucson community. His sounds are a mix of ambient, house and pop, and inspired by the work of iconic producer and rapper J Dilla. Check out his music at altrice.bandcamp.com and catch his set at 3:50 p.m.

DJs
DJs will be playing half-hour sets in the DJ tent from noon to 8 p.m. Here are a few choice picks to get your dance on.

Dj Jahmar International is a DJ for VH1's Love & Hip Hop Safaree. He says music is his therapy, and this is reflected in his emotive style with a taste of his childhood influences: reggae, hip hop, grunge and funk. Check out his mixes at soundcloud.com/jahmarinternational and in the DJ tent at 2 p.m.

Courtesy
B-Rad
B-Rad's love of music began with a mixed tape her brother made her in eighth grade, featuring De La Soul's "I Am I Be." She listened to the tape until its eventual deterioration. "Hip Hop for me is the feeling I got the first time I heard that song," she writes in her bio. "DJing enhances that feeling, and I want to spread that love to everyone." Find her in the DJ Tent at 6:30 p.m.

Julius Schlosburg
Breakdancing
The outside breakdance stage is a must see, with breaking competitions and popping. Come see some of Tucson's most talented dancers push their moves to the limit. 1 to 6 p.m.

Courtesy
Djoriginal
Djoriginal is a 15-year-old Tucson-born rapper with an old soul and a story to tell. His music reflects pop culture and has a beat that inspires some serious get down. Check out his music at soundcloud.com/djoriginal-162687664/djoriginal-panda-remix. 2:55 p.m. on the outside rap stage.

Ill V is a female rapper, recording with Highly Intalksickhated Ent. She performs locally and across the U.S. Her music is simultaneously smart, dark and sultry with a feminine grit often lacking in the hip hop scene: "Flaunt your brain and not your tits. Ain't gotta spread my legs to fuckin' blow your mind." Check out her music at soundcloud.com/illv_hi. 8:05 on the outside stage.

Courtesy
Woodro
Main stage
Seventeen-year-old Woodro has been honing his lyrical abilities since he was 11. The two-time THHF performer moves to the main stage this year, where he'll be spitting rhymes that are nothing short of heartfelt authenticity. Check out his music at soundcloud.com/woodro-music. On the main stage at 2 p.m.

J. Tek tells stories with soulful hooks. Find his music on Spotify or check out his video with DJ Pain 1, "Ghetto Birds," at youtube.com/watch?v=9l3hPNgIJ6g. The 24-year-old rapper from Maryland will be on the main stage at 4 p.m.