Here's a Game and Fish scheme even the hunters hate.

Governor Jane Dee Hull's June 23 Elk Symposium, held in Phoenix, made it painfully obvious that Arizona's ranchers are a far cry from their country bumpkin predecessors. They not only understand the politics of turning a profit, but they know exactly how to ally themselves to some of the state's most powerful wildlife professionals.

The overnight financial windfall New Mexico's ranchers received several years ago, when a landowner elk permit system was initiated, was no doubt the catalyst. Under the system, New Mexico ranchers and landowners who qualify receive elk permits they can sell, auction or give away as they see fit. Permits in some areas of New Mexico are selling for more than $10,000 each.

Originally designed to limit the number of problem elk and relieve the economic strain felt by landowners who chronically watch free-ranging elk break down fences or overgraze pastures, it wasn't long until the economic potential became apparent. Today many of New Mexico's landowners simply offer their tags to the highest bidder, and engage in questionable practices designed to maximize permit value. Access to public lands, for example, is often limited, or completely denied, if the maintained road happens to cross private land. An elk permit is much more valuable if you guarantee only one hunter access.

Hunters aren't the only ones denied access. Greedy landowners simply lock the gates to roads crossing their property, and unless there is another way into the area, the National Forest or State Trust land becomes a de facto private hunting preserve, and bank accounts swell.

Many of New Mexico's part-time guides have turned full time, and have successfully implemented a set of regulations that limit or completely bar outside guides and outfitters from doing business in the state.


THE SYMPOSIUM'S brochure didn't even try to hide its pitch. "We hope to be able to discuss the suite of benchmarked opportunities employed throughout the western states to resolve private land issues associated with elk," the Arizona Cattelmen's Association page of the brochure read.

Its members were vocal and numerous at the event.

"The ranchers are providing the water for elk and other wildlife," one rancher said during the symposium. "Why not issue permits to land owners to compensate for damage?" another asked.

Jim Chilton, husband of Arizona Game and Fish Commissioner Sue Chilton, explained that his family has been ranching Arizona for generations, and that his grandfather drove the state's first elk herd from Clifton, after it arrived by rail. He said the state should issue "just compensation for individuals who have been damaged."

"Where does it stop?" asked Lloyd Wundrock, a Tucsonan and member of the Coalition of Outdoor Recreation Enthusiasts who attended. "Do we compensate a homeowner whose petunias are raided by javelina? What's next, deer or antelope landowner permits?"

The symposium was cosponsored by Arizonans for Wildlife Conservation--the failed Prop. 102 group whose leadership includes a number of hunting guides who stand to gain economically if a landowner permit system is implemented. This led more than a few sportsmen to voice concern over the apparent conflict of interest.

Even the questions posed to attendees appeared biased. Landowners received a pink sheet with a number of questions, including "Should private landowners pay for public recreation?" A white questionnaire aimed at sportsmen asked, "Do you feel private landowners should be compensated for documented losses from wildlife on private land?"

"This is a nightmare," Wundrock said. "First they convince the public they're trying to avert landowner permits, then they phrase the questions in such a manner as to generate specific answers."

The Arizona Game and Fish questionnaire was even more ominous. It asked, "Would you be willing to pay a reasonable access fee to obtain permission to hunt on private lands for elk hunting in Arizona?"

No, landowner permits were not mentioned. Instead, Arizona Game and Fish was asking about payment to landowners to hunt on their property--a permit system that could well avoid that annoying prerequisite law change.


"WHILE I WAS GLAD to see so many people interested in Arizona's elk management," said National Rifle Association Board of Directors member Todd Rathner, who also drove from Tucson, "landowner permits could be a disaster for Arizona's hunters. It is especially upsetting because it is the average hunter whose license fees and Pittman Robertson taxes pay for the management of Arizona's elk. Don't take my word for it. Just take a close look at New Mexico's nightmare."

"Landowners need to make themselves more accessible," Wundrock said. "If they're experiencing problems with elk damage, why deny access to hunters who could help alleviate the problem ... unless, of course, they're more concerned with the bottom line than simply alleviating the problem?"

The symposium raised more questions than it answered.

Why was Gov. Hull given top billing if she didn't even attend? Why didn't her staff even know about the symposium (they were shocked enough to ask we fax a copy of the full-page ad when we called)?

Why did the Arizona Game and Fish Department donate a full-page color ad in the hunting regulations worth several thousand dollars, when at least one of the sponsoring organizations was involved in the last election?

If the Arizona Game and Fish Department is so concerned about rancher/sportsmen relations, why is $800,000 in Heritage Access Program funds, designed to improve those relations, remaining idle? Why is the full-time position within the department to address those concerns still vacant?

And, if the symposium, as billed, was truly designed to thwart landowner permits in Arizona by improving sportsmen/landowner relations, why was it held only hours before a conservation organization auctioned off some of the state's highest-priced deer tags? At the same facility?

To demonstrate how much money there is to be made?

Stay tuned. This one's not going away.

Speaking of Game And Fish , Government

Reward offered in stoning death of Javelina at elementary school 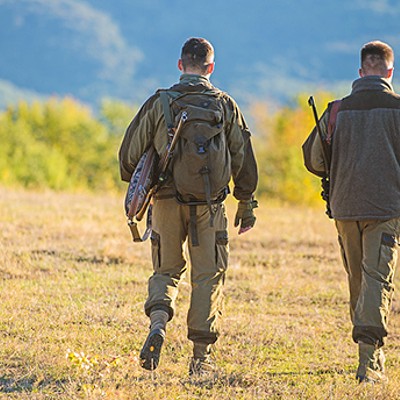