This Detroit sextet formed in 1996, with the original name The Wildbunch, an apt description of the new-wave dance rock smorgasbord they put forth. Adopting band alter egos (Dick Valentine, Da Ve, Johnny Na$hinal, Tait Nucleus?, Percussion World and yes, Smogasbord), the Electric Six can reach party frenzy in no time flat. Sort of an American extension of the Madchester scene in the 1980s and early 1990s, the Electric Six hit Nos. 2 and 5 on the UK singles chart for "Danger! High Voltage" and "Gay Bar," from their 2003 debut Fire. Fans of Queen, Devo or the Talking Heads could also find a lot to like in the Electric Six.

The Electric Six have such a particular, hypersexual genre-defying style that you could start on any album, but both the debut Fire and the band's ninth studio album, last year's Mustang, offer succinct introductions to their energetic world.

"Danger! High Voltage," (2003). A warped tune that blends disco rhythms, funk guitar and an all-out wall of distortion, this first Electric Six single set the tone for everything that would follow.

"Gay Bar," (2003). A quick and powerful 2:20, this bright glam rock tune has a brilliantly provocative video, with a series of Abraham Lincoln look-alikes in hot pants (or speedos) exercising, pole-dancing, getting makeovers and otherwise frolicking about the White House.

"Radio Ga Ga," (2004). More than just a Queen cover, the Electric Six version of this song is a full-on homage to Freddie Mercury, perhaps the one rock star that most influenced the sensibilities of Dick Valentine.

"I Buy The Drugs," (2006). From their third album Switzerland (dedicated, for whatever reason, to tennis star Roger Federer), there's a string of absurd lyrics (about sending drugs via self-addressed, stamped envelopes) but there is the sense that drugs have fueled more than a couple party nights in the band's history.

"Jessica Dresses Like a Dragon," (2013). This gritty oddball from Mustang finds Electric Six in a bombastic rock mood, but it's the off-kilter lyrics about a girl with "reptilian tendencies" that make it such a memorable song.

XOXO: Where to Rock Tuesday, March 26 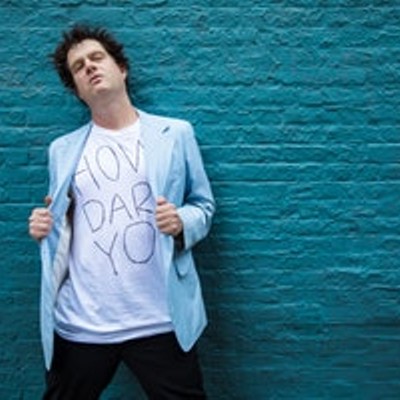 Song of the Day: ‘The Corridor’ by Don ‘Doop’ Duprie

Song of the Day: "Crazy Horses" by Chick Cashman and Ron Reyes