Tucson has no shortage of quirky and creative holiday celebrations, such as the Winterhaven Festival of Lights, the All Souls Procession and the ceremonial breaking of the ice on the Santa Cruz River (hey, hitting 100 degrees for the first time counts around here).

One of the city's signature holiday events returns on Saturday, Dec. 21, when the 19th annual Downtown Parade of Lights transforms floats, vehicles and even people into blinking, sparkling ambassadors of holiday cheer.

"It's very much Tucson," said Brandi Haga, who has coordinated the parade for the Downtown Tucson Partnership for the past five years. "It's a very fun, quirky community event. We kind of leave the theme up to everybody involved—whatever they want to do, however they want to participate. You could be one person walking down the street with lights wrapped around (yourself). We've had groups of people doing that."

This year's parade is scheduled to have about 80 entries, up from 70 in 2012. They range from full-scale floats to the aforementioned walking light shows. Haga said one regular entry over the years is a man who rides on a motorized barstool.

"I think this year he's going to pull a red wagon ... and it will have a Nativity scene," Haga said. "The parade definitely has that 'weird factor.'"

All told, about 700 people are expected to march or ride in the parade.

This year's parade, which begins at 6:30 p.m., returns to its traditional route along South Stone Avenue from 17th Street to Ochoa Street, then over to 12th Street, where it spills into Armory Park. The 2012 parade went through the nearby El Presidio neighborhood, but organizers decided to return to the old route because of the ability to center the parade and its many ancillary events on Armory Park.

"Having the park, having a large open space where we can facilitate lots of people and vendors, is really helpful," Haga said.

Five parade entries will be selected for awards before the parade starts, with the winners getting up to $500 in prize money, plus a banner they can display during the parade, Haga said.

While the parade is the main attraction, Haga said paradegoers can take advantage of a variety of events downtown. At 4 p.m., DJs from KXCI 91.3 FM will start spinning tunes from Armory Park. Mayor Jonathan Rothschild will light the city's Christmas tree at 5:30 p.m. at the park while members of Arizona Opera perform. And food booths will be open at the park throughout the evening.

Past parades have drawn as many as 30,000 spectators, according to the Downtown Tucson Partnership. After watching the 90-minute parade, attendees can extend the fun by enjoying the flourishing downtown bar and restaurant scene, said Haga, who already has her post-parade plans mapped out.

"I usually go to Hotel Congress and have a stiff whiskey," she said.

Claytoon of the Day: Feliz Navidad

Three Great Things to Do in Tucson Today: Monday, Dec. 10 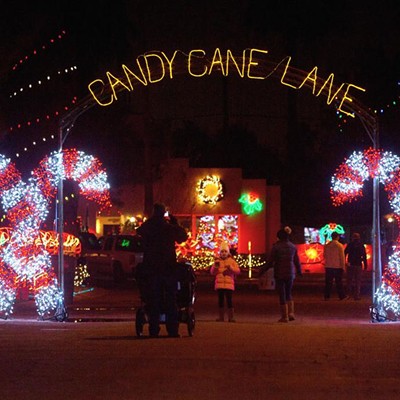