(Eegee’s/Submitted)
Che West is a Tucson native who owns a pop-up business called Tortillas by Che West. He specializes in unique tortilla and taco flavors.

Eegee’s is collaborating with a local chef for the first time, and their sweet, spicy menu creation will be dropped at an exclusive event.

The restaurant is hosting Eegee Palooza to launch a specialty taco brainstormed by Che West, a Tucson native and chef who owns a pop-up kitchen called Tortillas by Che West. The event is from 4 to 7 p.m. on Oct. 8 exclusively at the restaurant chain’s location at 4765 S. Landing Center Drive.

Alongside the chef’s taco masterpiece, guests can stop by the restaurant to enjoy music, giveaways and merchandise.

“Utilizing our platform and bringing in people like Che West can create these amazing ideas and these amazing concepts with food, it’s a no-brainer for us,” said Gabe Oropeza, Eegee’s senior engagement manager.

The chef, who specializes in unique tortilla flavors and tacos, began his business around six years ago in his backyard. For $20, visitors enjoyed tacos, enchiladas and margaritas. He was only expecting 50 people to attend, but attracted over 100.

From there, he took his pop-up to restaurants, collaborating with Rollies Mexican Patio, Hop Street Lounge, Owls Club and Saint Charles Tavern. He has built a community following and a brand as an “elusive chef.”

“I think this is just something that’s unfathomable for me, and I just can’t believe that I got this opportunity to make tacos with Eegee’s,” said West.

(Eegee’s/Submitted)
On Oct. 8, Eegee’s is collaborating with local chef Che West for an exclusive event launching a special maple-sriracha taco.

Oropeza believes that Eegee’s collaboration with West is the beginning of a number of future partnerships with other local talents — from chefs, to graphic artists, to muralists.

“We’re always trying to follow new trends and be the leader of new trends, and we don’t see other restaurants or other businesses around Tucson, around Arizona collabing with local artists or local chefs and making a meal out of it,” he said. “So I think this is an opportunity to open eyes and show people there’s a market out there and that collabing with the community can work.”

For more information about Eegee’s, visit eegees.com. Chef Che West can be found on Instagram and Facebook. 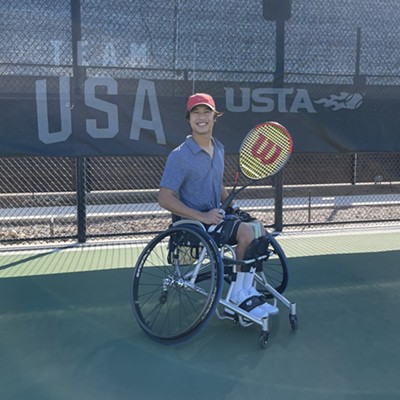