Baby, Be Good to Us

Today is the first day of 2015 and I don't want to rattle off a list of resolutions. We all know what we each need to do to make our lives better. For the city and county, that's a resolutions list that could go on forever—how we could take better care of our citizenry, run better elections and take care of our roads. That also sounds like a story development list for next week's staff meeting, so I think I'll keep that to myself.

Right now, however, rather than resolutions, I'm leaning towards authenticity. I want to be more, well, me—I want to be a better friend, continue to cultivate an open heart, I want to get back to camping and backpacking as often as possible, and I want laughter, exploration and adventure to be a priority.

What's my biggest motivator in being more authentic? Being a better mom to a 13-year-old on cusp of manhood. He happens to be a mensch of a kid. I'm so proud of everything he's accomplished and I can see the road before him and know he'll make good choices. I feel so confident in that, but less confident in the world he eagerly wants to be part of and wants to help.

He's more than four years away from 18, which means I'm four years away from a new set of worries and a new set of shoulders for him to stand on, perhaps stronger than the first set I've provided. But what of this world? Many of our important conversations seem to take place during car rides and evenings at home between homework, dinner and a TV show we decided to watch for the night. We talk about Marvel comics and Doctor Who, but we also talk about climate change, Ferguson, Mike Brown, and Eric Garner.

This mensch of mine recognizes injustice, and he also recognizes the troubles, hurt and pain that come with social injustice and racism. What's obvious to him isn't obvious to others. Some of our blog commenters on The Range accuse me of making everything about race. And this past month, I've had many a holiday conversation with people, and I guess those lovely commenters are right, I often bring up race. Yes, it's always on my mind--even the mensch kid has pointed it out, but that same kid has also pointed out how obvious race plays an issue in the police violence that has become part of our landscape (has been for some time).

The recent murder of two Brooklyn police officers, Rafael Ramos and Wenjian Liu, is equally tragic. Their profession, dangerous and challenging, is under attack. We do forget that there are good people who wear those uniforms among us and also happen to be our family and neighbors.

But I worry that what we are allowing to take place now, turning Ismaaiyl Brinsley, the sad and troubled killer of these police, into a symbol and representative of the movement that started in Ferguson. This man was troubled, not an activist. His heart heavy enough to shoot his exgirlfriend earlier before killing those police. The protests and movements taking place around the deaths of Garner and Brown have nothing to do with Brinsley's actions. Let's move on. Let's be more authentic.

Instead of focusing on that narrative, let's talk about race and stop being scared of those difficult conversations. Dialogue is more important than ever, which is why I recommend you consider registering for the Black Life Matters Conference at the UA, on Jan. 15-17. For more information and to register, go to blm.sbs.arizona.edu/. Maybe even if you disagree with me and think it's a subject I think about or talk about too often, why not participate and perhaps learn why it remains a subject worth our time.

Cheers to you, your menschy kids and our families and those who hold our hearts, and creating a better future for all of us. Cheers to 2015. Baby, be good to us. 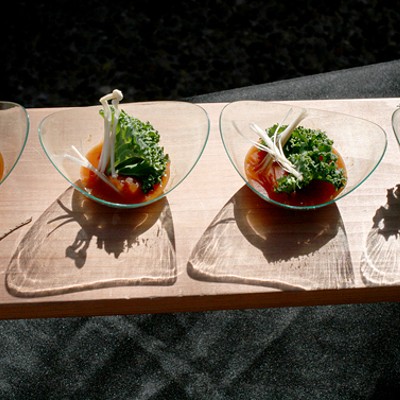