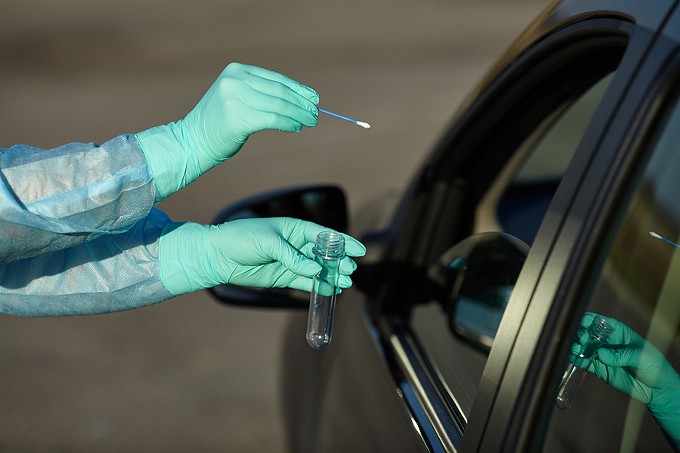 THE LOCAL NUMBERS: The number of confirmed novel coronavirus cases in Arizona had topped 28,000 as of Tuesday, June 9, according to the Arizona Department of Health Services. Pima County had seen 3,161 of the state's 28,296 confirmed cases. One week earlier, on Tuesday, June 2, the state had 21,250 confirmed cases. The death toll had topped 1,000 in the last week, with 1,070 people dead after contracting COVID-19, including 212 in Pima County, according to the June 9 report. In Maricopa County, the number of confirmed COVID-19 cases had risen to 14,374. Roughly three weeks after Gov. Doug Ducey lifted Arizona's stay-at-home order, Arizona hospitals were seeing a rise in the number of people hospitalized with COVID symptoms, as well as more people visiting emergency rooms. ADHS reports that as of June 8, 1,243 Arizonans were hospitalized and 438 people were in ICU units. The report shows 848 people arrived at emergency rooms with COVID-like symptoms on June 8.

THE NATIONAL NUMBERS: Nationwide, nearly 2 million people had tested positive for the novel coronavirus, which had killed more than 111,000 people in the United States as of Tuesday, June 9, according to tracking by Johns Hopkins University.

THE WRONG SIDE OF THE BED SPACE: Banner Health's chief clinical officer Marjorie Bessel hosted a special briefing about the rapidly increasing numbers of COVID hospitalizations in Arizona on Friday, June 5. Bessel warned that if current trends continue, Banner will soon need to exercise its surge plan to increase ICU capacity. Bessel highlighted a steep increase of COVID-19 patients on ventilators: On June 4, Banner's Arizona hospitals had 116 COVID-19 patients on ventilators, up from roughly 15 a month prior.

WHO DIDN'T SEE THIS COMING? At a June 4 press conference, Ducey said he and Department of Health Services Director Dr. Cara Christ anticipated the current increase in positive COVID-19 cases because testing has "dramatically increased" within the state. Christ downplayed the alarm about the recent increase in cases, which some have attributed to the end of the stay-at-home order on May 15, saying "as people come back together, we know there will be transmissions of COVID-19." While they admitted new cases are to be expected when people begin to interact again, Ducey and Christ said their main focus was to ensure that hospitals had the capacity for an increase in cases. They reported that the current use of hospital beds, ICU beds, and ventilators were all within capacity last week. "The fact that we were going to focus on having more tests means we were going to have more cases," Ducey said. "We anticipated that. What we wanted to do was to be prepared for this." Christ revealed two days later that the state had been miscalculating the percentage of available bed space in hospitals by counting potential "surge beds" that could be brought into use as already filled. Christ said the error had been caught and would not be repeated moving forward.

FIRE ON THE MOUNTAIN: Fire crews are currently battling two blazes that have each burned more than 1,000 acres north of Tucson: the Bighorn Fire in the Santa Catalina Mountains and the Tortolita Fire in the Tortolita Mountains. Lightning storms caused both fires, which are growing worse thanks to gusty weather and high temperatures. The Bighorn Fire ignited on the evening of June 5, burning across the Pusch Ridge in clear view of Oro Valley. The fire grew from 200 acres on June 6 to more than 2,300 on June 8. Approximately 100 fire personnel and multiple helicopters are fighting the Bighorn Fire, which is 10 percent contained as of Monday afternoon. The Tortolita Fire also started on June 5 and quickly spread to an estimated 3,500 acres. Ninety fire personnel and a dozen pieces of aircraft are fighting the Tortolita Fire. According to the Arizona Department of Forestry and Fire Management, parts of Cochise Spring Road have been closed. The Tortolita Fire is two miles from the Cochise Spring area, west of Tortolita and Christopher Ranch, east of Marana. There were no evacuations as of TW's print deadline.

INTO THE NIGHT: Gov. Doug Ducey lifted his curfew order via Twitter on Monday, June 8. Ducey had declared the curfew Sunday, May 31 after protests in Tucson and the Phoenix area turned into riots and looting sprees. Protestors gathered for several demonstrations in Tucson despite the heat and the curfew order during the week. The protests here and across the nation were triggered by the killing of George Floyd, who died in police custody after a Minneapolis cop kneeled on his neck for more than eight minutes as the man gasped for air and said he couldn't breathe. The officer, Derek Chauvin, was fired and now faces charges of third-degree murder and second-degree manslaughter, while three other officers who watched as Floyd was held down were also fired and face charges of aiding and abetting murder, but the protests have continued.

Editor's Note: Wrapping Up the Year From Hell