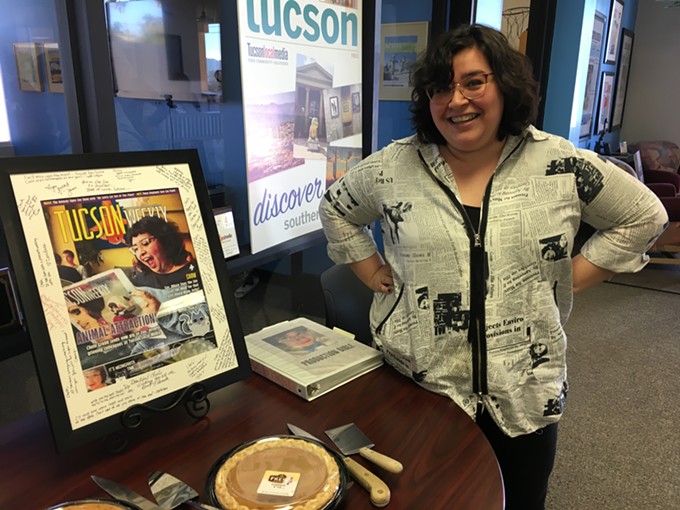 Tirion Morris
The Tucson Weekly family celebrated Chelo on her last day at the office.

I've had to write a few goodbyes since landing in this chair more than a year ago—and it's almost always an awful experience. This is one no different: We are bidding farewell to production manager Chelo Grubb, who is heading off to a new job at Reid Park Zoo. "Production manager" barely begins to describe what Chelo did. She oversaw the layout of the paper, but she did more behind the scenes than she ever got credit for: She assisted with Best of Tucson along with other special projects; tracked down photos when we needed one in a crunch; did all manner of digital journalism on our websites; and ensured we got the Weekly and the other papers in the Tucson Local Media empire out the door every week. She did it all with an unrivaled grace and calm, despite the many times I missed deadline. We're gonna miss you, Chelo!

Stepping into Chelo's shoes is Anissa Sprecher. Since she signed on with us last year, Anissa has impressed us with her great sense of design and we're excited about what lies ahead in 2019.

This week, Tucson Salvage columnist Brian Smith brings us the story of artist Alvaro Enciso, who is erecting crosses at the sites where migrant remains have been found in the Southern Arizona desert. It's endless and thankless work, but Enciso is called to it. By the way, if you want to see Brian reading from his collection of columns, Tucson Salvage: Tales and Recollections from La Frontera, he'll be appearing Friday, Feb. 1, at Antigone's, 411 N. Fourth Ave. Brian will be joined by his brother, Barry Smith, who will entertain with music from his electric violin, as well as former Tucson Weekly editor Mari Herreras, who will be reading poetry. Also on hand will be Brian's wife, Maggie Smith, who will screen the Tucson Salvage documentary that is lighting up the festival circuit. The free event starts at 7 p.m.

Elsewhere in the paper: Columnist Tom Danehy teaches us what's wrong with charter schools; associate editor Jeff Gardner listens to what Tucson composer Steve Roach has to say about his latest Grammy nomination; staff reporter Kathleen Kunz looks at why Gov. Doug Ducey wants to see Pima Community College's aviation program get an extra $20 million this year; arts writer Margaret Regan previews this weekend's Ballet Arizona concert; theatre critic Sherilyn Forrester says ATC's production of Two Trains Running is more powerful than a speeding locomotive; comedy correspondent Linda Ray tells you about how you can still climb aboard the Comedy Alliance of Tucson's LOL Crawl; film critic Bob Grimm doesn't think too much of The Boy Who Would Be King; and there's plenty more, so dig in read all about it.

See you in the monkey's cage!