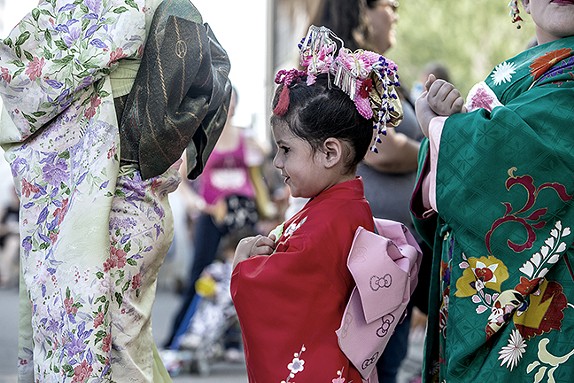 With the weather cooling down, it's safe to say we're officially in Southern Arizona's festival season. This week, we're giving some love to one of the biggest: Tucson Meet Yourself, the annual gathering for all of Tucson's cultures in one handy downtown location. Our team of unpaid interns share some highlights of this year's festival.

We've also got an excerpt from Toxic Rage: A Tale of Murder in Tucson, the new book by former Tucson Citizen reporter A.J. Flick. Anyone living in Tucson back in 2004 remembers the brutal slaying of Dr. Brian Stidham, a beloved children's eye doctor. Flick covered the trial of Stidham's former medical partner, Brad Schwartz, and the man Schwartz was convicted of hiring to kill Stidham, Ronald Bruce Bigger. Her book about the tragic episode hits the streets this week.

Elsewhere in the paper: Associate editor Danyelle Khmara looks at the efforts to restore voting rights to convicted felons in Arizona; columnist Tom Danehy talks about his frustration with his new car's Bluetooth sound system and the jerks who don't wipe down the equipment at the gym; feature writer Jeff Gardner looks at the upcoming TENWEST Festival, as well as the opening on the stylish Hotel McCoy on the edge of downtown; arts writer Margaret Regan previews Ballet Arizona's innovative season opener this weekend; calendar editor Emily Dieckman looks at a photography exhibit focusing on women in Third World countries; music contributor Brett Callwood talks with Graham Nash ahead of his upcoming show at downtown's Fox Theatre; Mark Whittaker sinks his teeth into a new barbecue joint; and there's plenty more in the paper, so start digging in now.

Finally, a point of pride for the hard work done by the crew I oversee here: Tucson Weekly and its sister papers in the Tucson Local Media empire brought home 16 awards from the Arizona Newspaper Association's annual awards banquet last weekend. I've been in this biz a long time, but the kids I'm working with these days inspire me on a daily basis. I'm lucky to have them in this newsroom—and so is Tucson. Read all about their award-winning work.

Meet you at Tucson Meet Yourself!