Have You Seen This Candidate? 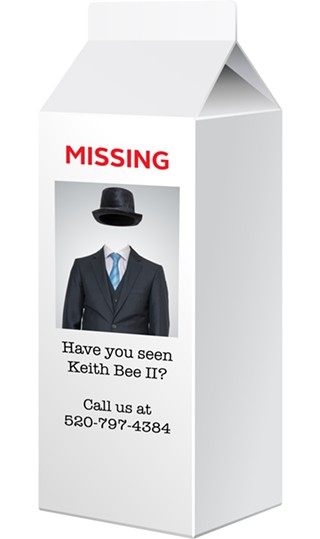 We here at the Tucson Weekly are a bit worried about Keith Bee Jr., the 21-year-old candidate for the Justice of the Peace post now held by his father. One of our hard-working interns, Kathleen B. Kunz, has been trying to track down the young Bee, who wants to run a courtroom here in Pima County. You can read about Kunz's effort, but here's a teaser: Bee has no campaign website, and he didn't include his phone number or email address on any of the campaign paperwork he filed with the county. Kunz managed to reach the current Judge Keith Bee and asked him to pass along a message to his son, but Judge Bee said that would be interfering with a partisan primary, so he couldn't help make that connection.

We're sure that in his quest to become the Doogie Howser of the Pima County bench, Keith Bee Jr. does not want people thinking he just coasted into a job based on his dad's name rather than his actual qualifications to run a courtroom. So Keith, please get ahold of Kathleen. Her contact info is at the bottom of her story. Don't make us ask every week!

On another note: The Tucson Sentinel's Dylan Smith and the Arizona Daily Star's Tim Steller have done a fine job exposing how the local TV stations fell way too hard for allegations from some leaders of a group called Veterans on Patrol that a child-sex ring was operating at a homeless camp—and thus helped validate a pile of BS that has a surprising number of conspiracy-minded nutjobs demanding to know what Tucson is going to do about this non-existent horror. In his Tucson Salvage column, Brian Smith goes inside a Veterans on Patrol camp next door to downtown's Santa Rita Park and learns about the people living there. As usual, Smith comes back with a story no one else would about people who are trying to get by in a world that has largely passed them by.

Editor's Note: Wrapping Up the Year From Hell