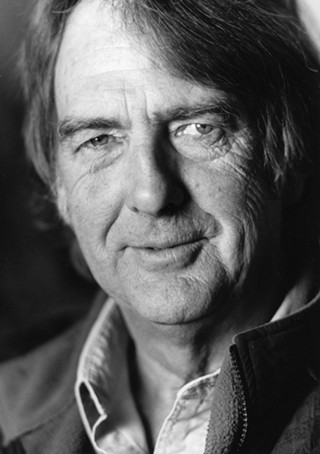 I started reading Chuck Bowden's Tucson Citizen stories when I was doing my first job in the newspaper biz back in the late '70s: my midtown paper route. Even in junior high, I was struck by how Bowden's words had a sizzle that your average newspaper accounts lacked.

So it's a thrill this week to be bringing you an excerpt from The Red Caddy, which recounts some of Chuck's memories of another legendary Southern Arizona author, Ed Abbey. The Red Caddy is a slim volume that's being released this week by University of Texas Press. It's the first of eight unpublished manuscripts that UT Press will publish in the next few years. Part of that plan will include completing Bowden's Unnatural History of America, a sextet of books that includes the previously published Blood Orchid, Blues for Cannibals and Some of the Dead Are Still Breathing. Next spring, the fourth volume, Dakotah, will be released; in the fall of 2019, we'll get our hands on Jericho; and the spring of 2020 will see the publication of Sonata/Sunrise, the book he finished a month before he died in August 2014.

Thanks to a $150,000 grant from the Lannan Foundation, UT Press will also keep the 26 books Bowden had previously published in print. Mary Martha Miles, who oversees the rights to Bowden's books, told me she wanted a deal that would keep Bowden's work in bookstores because "the kind of writing that Chuck did, it's not within a certain time frame. A great deal of what he wrote about the Southwest is going to remain relevant for many years."

And speaking of the Southwest: The gang at Hotel Congress is throwing a big fiesta with Agave Heritage Week, celebrating our favorite succulent. Feature writer Jeff Gardner has the details on Page 9. Elsewhere in the book, staff writer Danyelle Khmara covers the impending teacher strike and looks at how high-school students marched on Congresswoman Martha McSally's office to demand action on gun violence; arts writer Margaret Regan celebrates the news that indie shop Antigone Books will remain in local hands and takes a look at the latest exhibit at downtown's Etherton Gallery's current exhibition; movie critic Bob Grimm sketches out his feelings about Final Portrait; and there's a bunch more, but I'm out of room, so get reading and we'll see you next week.