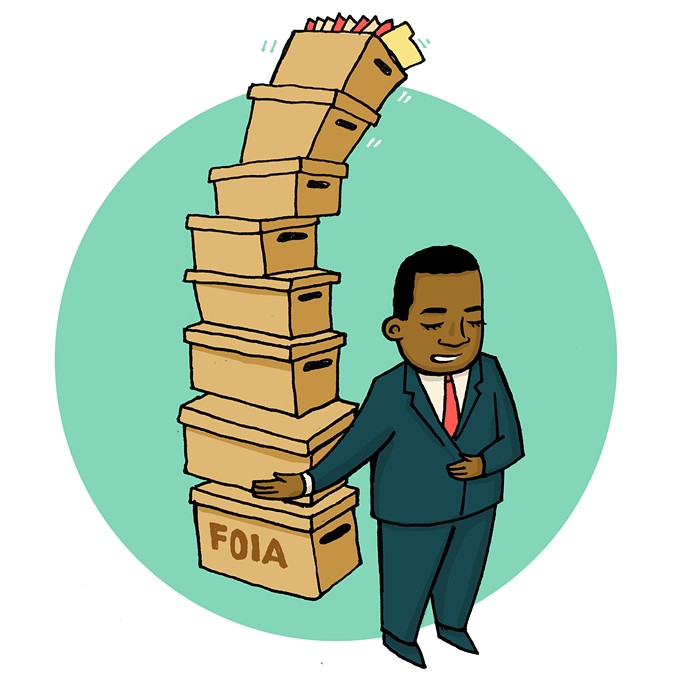 Way back in 2003, a young journalist named Dave Maass reached out to me with a story about a scandal in a private prison up in Florence that housed a lot of Hawaiian inmates. It turned out that prison management had decided to essentially just let a Hawaiian gang of inmates run the show.

It was a great story, and for the next few years, I watched Dave grow as a muckraker first in Arizona and then in Santa Fe and San Diego. He's now working at the Electronic Frontier Foundation, an outstanding nonprofit in San Francisco that fights the good fight for online privacy, net neutrality, government accountability and similar vital issues.

This Sunshine Week, I'm happy to see his work back in the paper as one of the collaborators on The Foilies, the EFF's annual roundup of terrible responses to public records requests. It's an amusing-but-enraging piece that shines a light on how governments across the country are going to great lengths to thwart the people's right to know. Check it out.

Elsewhere in the book: Staff reporter Danyelle Khmara brings us the latest on the fight over DACA, the student-driven March For Our Lives and this weekend's walk to support people with MS; arts writer Margaret Regan looks at how Ballet Arizona is going to cowboy up for a spring concert; theater writer Sherilyn Forrester reviews Rogue Theatre's production of Edward Albee's Pulitzer Prize-winning Three Tall Women; movie critic Bob Grimm says A Wrinkle in Time is a swiftly tilting disaster of a movie; food writer Mark Whittaker celebrates the 30th birthday of Cody's Beef 'n Beans; music writer Eric Swedlund profiles the young Lucy Dacus, who is playing Club Congress next week; 520 Cannabis columnist Nick Meyers looks at research that suggests that weed may be a great way to reduce America's opioid crisis; and there's the usual mix of columns that will guide you to the all the fun you can have in this town, especially on St. Patrick's Day.

Meanwhile, medical marijuana patients will want to visit TucsonWeekly.com, where they can find the ballot for the Tucson Weedly's 2018 Cannabis Bowl. We're looking for your thoughts on the best dispensaries, best strains and a bunch more, so cast your ballots before April 1, and we'll have the results in our April 19 issue.

In other news: Longtime Tucson Weekly contributor Leo W. Banks has won two big Spur Awards for his new novel, Double Wide, which tells the tale of a former baseball phenom who sets out to find out why someone left the severed hand of his catcher of his front porch. It's classic pulp noir set right in Southern Arizona; you might have read the first chapter when the Weekly excerpted it last November.

That's on top of Double Wide winning True West Magazine's nod as The Best Western Crime Novel of 2017. Big congrats to Leo for all the deserved praise—and go buy yourself a copy, would you?

See you all when I get back from SXSW! Oh, and if you're a music lover, check out TucsonWeekly.com for our ongoing reports from Austin this week.