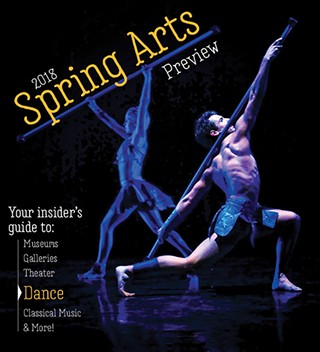 As the editor of this rag, I am constantly amazed at how much is going on in this town when it comes to the arts. Our Spring Arts Preview is jam-packed with performances, exhibits and plenty more on the horizon over the next few months. Longtime arts writer Margaret Regan fills us in on what's happening with museums, galleries and dance performances; theater writer Sherilyn Forrester previews the astounding array of performances on stage coming your way; and calendar editor Emily Dieckman fills out the upcoming lineup of classical music performances in our special pull-out section.

Elsewhere in the book: Danyelle Khmara looks at a proposed apartment development that could spring up on the corner of Fourth Avenue and Sixth Street, right where the Flycatcher nightclub now stands. Although the developer generally does student housing, the company's representatives say this one will be for young professionals—an assertion that's questioned by Tucson City Councilman Steve Kozachik, who has seen plenty of headaches from some of the student housing that has already popped up in the area.

We've also got news about the possibility of a new Sabino Canyon tram, a preview of a traveling replica of the Vietnam War memorial that will soon stop in Oro Valley and an interview with a UA scientist who will be doing a TED talk.

Meanwhile, columnist Tom Danehy marvels at President Donald Trump's ability to get away with just about anything, including those allegations that he paid hush money to a porn star to keep her from talking about their relationship; food writer Mark Whittaker unpacks lunch and dinner at downtown's Playground Bar & Lounge; film critic Bob Grimm gets tied up in knots while watching 50 Shades Freed; music writer Eric Swedlund catches up with Blitzen Trapper ahead of their upcoming show at Club Congress; and staff writer Jeff Gardner previews the Rialto Theatre's annual gala, which takes you back to the swank of the '60s on Saturday, Feb. 24. I've been to a few of these galas, and can tell you that it's a great time for the great cause.

There's plenty else in the book, including the usual curated columns—City Week, Quick Bites, Reel Indie, XOXO... and Nightcrawler—that let you know where to howl this week.

Thanks for reading. Now get out and enjoy this town's arts!