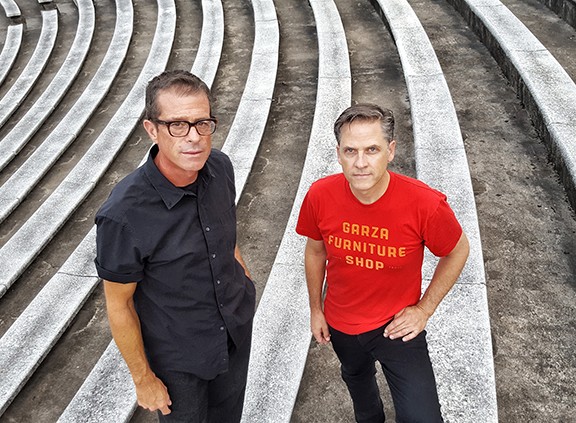 If there's a Tucson band that has been the soundtrack of my life for the last two decades, it's Calexico. I can remember seeing Joey Burns and John Convertino when they were playing tiny downtown clubs (and one memorable Best of Tucson™ party), and I've had a great time watching the band's evolution in show after show, record after record. So it was a thrill to sit down with them to learn all about the latest album, The Thread That Keeps Us, the band's ninth studio album. Enjoy this week's look at where the band is today, and pick up a copy of Thread. In the meantime, I'm gonna keep scheming on the best way to join them on one of those European tours.

Immigration has been a regular theme in Calexico's music—and it's heating up both here and in D.C. Staff writer Danyelle Khmara has details about how the Border Patrol is once again hassling humanitarian volunteers who are trying to save the lives of border crossers, as well as how Dreamers are reacting to the latest proposals to provide them with legal status in exchange for a border wall and other security measures.

Elsewhere in the book: Columnist Tom Danehy explains why he has hope in the next generation, even though he doesn't much dig the music kids are listening to these days; staff writer Christopher Boan catches up with Danehy himself, whose Immaculate Heart girls basketball team is a phenomenon—and not just because they only have five players. Music writer Xavier Otero profiles Katie Haverly, who is celebrating the release of her new album, Pluto, with a record-release party at Club Congress this Friday, Feb. 2; theatre writer Sherilyn Forrester is smitten with the love story at the heart of Arizona Theatre Company's production of Outside Mullingar; arts writer Margaret Regan offers up a variety of dance styles for you to check out; Chow writer Mark Whittaker sips on some locally fermented tea; movie critic Bob Grimm is spellbound by the grim western Hostiles; and, of course, there's much more, including so many fun things to do in City Week, Reel Indie, Quick Bites, Nightcrawler and XOXO...

Rock on, and we'll see you next week!