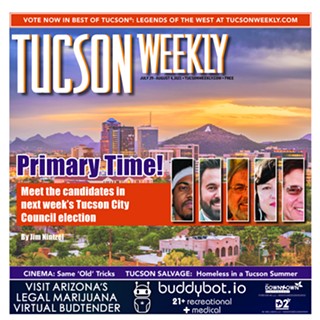 We've just a few days from Tucson's primary election next Tuesday, Aug. 3. We've got two races that voters will decide: The midtown Ward 6 primary where two rookie candidates are trying to unseat three-term incumbent Steve Kozachik, and the northside Ward 3 primary where Democrats Kevin Dahl and Juan Padres are fighting for an open seat because Democrat Paul Durham stepped down earlier this year and his appointed replacement, Karin Uhlich, did not seek the seat. I write about both races this week.

By the way, this is an all-mail primary, but if you haven't sent in your ballot yet, it's too late. But you can drop it at one of the city's vote centers on Election Day (or cast a ballot there if you've lost the one you were sent). You'll find details at the end of both stories.

Elsewhere in the book this week: Staff reporter Christina Duran looks at Arizona's alarming rise of COVID cases, with health experts saying Gov. Doug Ducey and the Arizona Legislature have now passed laws that prevent any kind of meaningful efforts at reducing the spread of the coronavirus; Tucson Salvage columnist Brian Smith introduces us to Linnadee Dehart, who has been living out of her car through this Tucson summer after losing what little she had earlier this year; columnist Tom Danehy notes how Hollywood screenwriters seem to have written the perfect lines for today's politics; Chow contributor Matt Russell talks to the folks at Pueblo Vida Brewery ahead of the upcoming National IPA Day; movie critic Bob Grimm says that M. Night Shamalan's tricks are getting, well, Old; Tucson Weedly columnist David Abbott looks at how some veterans are trying to persuade the VA to be more cannabis-friendly; and calendar editor Emily Dieckman lets you know where to howl this week. Plus, there's the usual suspects throughout the book, including Tucson's best comics, sex column, horoscopes and all the rest.

Speaking of Tucson's best: Voting continues in the second round of Best of Tucson®: Legends of the West! Trot on over to TucsonWeekly.com to cast your ballot in hundreds of categories.

Hear Nintz talk about all the cool stuff happening in Tucson during the World-Famous Frank Show at 9:30 a.m. Wednesday mornings on KLPX, 96.1 FM.