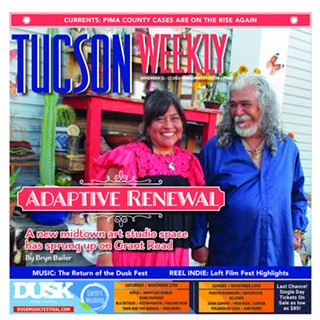 You gotta hand it to Tucson artists.

When work on the Downtown Links road (which will finally complete the last mile of Aviation Parkway, decades after planning began) forced them from the Citizens Transfer warehouse, they found themselves a new building in need of some love, just down the street from one of Tucson’s most notorious intersections, Grant Road and Alvernon Way. The group of artists have rehabbed an old furniture store, transforming it into the Tucson Art and Design Center. There are still challenges, but it’s blooming into the kind of artist space we need in this town. Contributor Bryn Bailer brings you the details in this week’s cover story.

In this edition, we also relaunch our Reel Indie film column to give shoutouts to cinema happenings around town. This week, Matthew Singer brings us updates from the Loft Film Fest—which swings into full gear this week—as well as the Fox Theatre’s new Spanish-language Cinema Tucson and other special screenings around town. Plus, movie critic Bob Grimm reviews Julia, one of the Loft Film Fest’s anchors.

Elsewhere in the book this week: Staff reporter Alexandra Pere brings us the distressing news that the spread of COVID is on the rise (but at least the vaccine is now available for kids ages 5 to 11); Kylie Cochrane of Cronkite News looks at how Arizona will soon be distributing “social equity” licenses for cannabis dispensaries; food columnist Matt Russell pours one out for the craft beer benefit happening at this weekend’s Tucson Roadrunners hockey match; managing editor Jeff Gardner tells you about Luz de Vida II, a benefit album featuring Tucson-related bands that benefits nonprofit organization Homicide Survivors; XOXO columnist Xavier Omar Otero tells you all about another lineup of bands coming through town this week, including Lukas Nelson & Promise of the Real, REO Speedwagon, the Beach Boys, Jenny Lewis and more; calendar editor Emily Dieckman lets you know what you can do for fun in this burg in City Week; and we’ve got a preview of this week’s Dusk festival and plenty more in our page

Hear Nintz talk about some of your best entertainment options at 9:30 a.m. Wednesdays during the World-Famous Frank Show on KLPX, 96.1 FM.