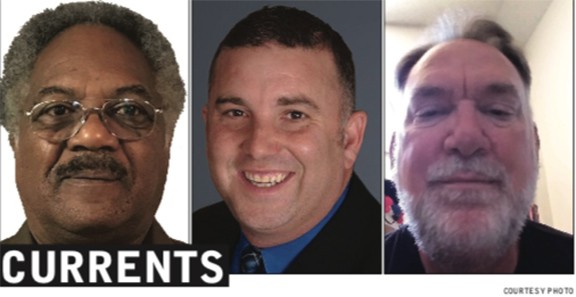 Courtesy photo
Left to right: Ewart Williams, Paul Cunningham and William Peterson are running for a spot on Tucson’s city council.
As he campaigns for reelection in Tucson's eastside Ward 2, City Councilmember Paul Cunningham says he's proud of his accomplishments during his nine years on the council.

But Republican Ewart Williams, who owns a local plastering company, and Green Party candidate William Peterson, a retired Air Force veteran, both say that nearly a decade, it's time for the Democrat to go.

Unfortunately for both challengers, the political playing field is stacked against them in the Nov. 5 general election. Incumbency carries a built-in advantage and there are more than two Democratic voters for every Republican voter in city limits. (The Green Party has only been able to attract 879 members among Tucson's 265,078 registered voters, according to the latest figures on Pima County Recorder's Office website).

Nor have the challengers—who are both making their first run for public office—done much to help themselves. As of Sept. 30, Ewart had raised only about $1,000 for his campaign, while Peterson had raised just $500.

By contrast, Cunningham had raised roughly $36,000 in private campaign contributions and received more $24,000 from the city's matching funds program, giving him a campaign warchest of more than $60,000.

Cunningham is also winning endorsements across the interest-group spectrum, from the Sierra Club to the Tucson Metro Chamber.

Cunningham's fundamental argument: The city is on the right track. He points out that many major arterial streets in Ward 2 have been repaved during his tenure. A decade ago, 80 percent of them were in failing condition, while today that number has dropped down to around 10 to 20 percent.

Cunningham says downtown has rebounded in the last decade, though he expresses some concern about development on Fourth Avenue.

"As of right now, we've been going at a breakneck speed," Cunningham said. "It's great development, and we're really proud of it and downtown is thriving. By a matter of law and proper ethics, you can't just say no more development. But what you can do is say let's let a couple of these projects come to fruition, see where they're at before we start another one."

He points out that there are currently two new construction projects on Fourth Avenue, and says that's a lot of change for the community to experience at once.

"We don't need to be doing another project on Fourth Avenue for a while," Cunningham said.

Cunningham expresses concern that the city needs more police officers to bring down high response times for non-emergency or low-priority calls. He says the city is hiring new officers as fast as they can, but the issue is with retention.

"We can do three academies here, we can take about 35 officers per academy, so we can get 105 new officers in, assuming that we can find 105 qualified candidates who accept the academy, which doesn't happen every year," Cunningham said. "And then they all have to graduate the academy, and not all of them graduate."

He says about 80 or 90 graduate the academy every year, but other officers within the force are retiring. So they have a net increase of about 20 to 30 officers each year. His goal is to get the force up from about 800 to 911 sworn officers by 2020.

"The money is there to do that, it's just a logistics goal," he said. "I think some of the low-hanging fruit is we could probably partner with a couple of school districts and some of the school safety officers could become CSOs [Community Service Officers]. I think that would be a pretty neat way to lighten that call load among our existing officers."

Cunningham says the transit system still needs more review. He'd like to see a new a new police station and city services building in Ward 2 during the next four years.

had a life set up in southern California before moving to Tucson for a job in construction. He figured he would leave after a few years, but has called the Old Pueblo home for more than two decades.

Now, he wants to shake things up in city council. He believes the city's general fund has been treated as a "slush fund" and city leaders tap into it whenever they run out of money. He wants every department to adhere to a "strict budget" and be held accountable for their expenses.

"I talked to a lot of people from every side of Tucson and everyone is on the same page, it's just the government is not on the same page as the people," Williams said. "That's what made me want to run this year."

To cut costs, Williams would like to see the city's bus fleet reduced or switched over to smaller buses. He says that because of the popularity of Uber and Lyft, people aren't taking the bus as often.

Williams also is not a fan of downtown's SunLink streetcar. He rejects claims that the electric rail line "revitalized downtown," and says that new businesses themselves attracted people to the area.

"The streetcar is in the red, it has always been in the red and they knew it was going to be in the red when they built it," Williams said. "It doesn't serve the people of Tucson." He believes road construction projects within the city are mismanaged and take too long. With a background in construction, Williams said it shouldn't take months to do a "simple road widening."

William Peterson got into the race thanks to the encouragement of Mike Cease, the Green candidate for city mayor. An active member of the local Justice Alliance, Peterson has pushed for the Pima County Board of Supervisors to reject federal grant dollars that come through the controversial Operation Stonegarden program that provides funding to the Pima County Sheriff's Department.

Peterson has been going door-to-door in Ward 2, asking residents what issues they care about and what the city government should focus on. The feedback he gets focus on taxes, affordable housing and public education, among other topics.

Peterson has expressed an interest in getting involved at Ward 2's Sahuaro High School, finding out what teachers need to be more successful, and speaking with at-risk students who may drop out of school.

"If kids are not in school, then why? I'd like to work on that and get them back into school," Peterson said.

Peterson also wants to get to the bottom of what happened to all the bond money for road projects. He expressed gratitude that the city is working on Camino Seco and Harrison Road, but feels there needs to be more accountability on how that money is spent, even though the projects are tracked on the city's website.

He wants to see sustainable growth in Tucson's future, meaning that new businesses should not negatively impact residents by "jacking up home prices" or property taxes.

The most contentious issue

in this year's election is Prop 205, Tucson Families Free and Together, which is informally being called the sanctuary city initiative. It would limit how Tucson police could interact with federal authorities on immigration issues. Supporters—including Congressman Raúl Grijalva and Pima County Supervisor Richard Eliás—say it would prevent undocumented immigrants from facing deportation, while opponents—including Mayor Jonathan Rothschild and all of the members of the Tucson City Council, including mayoral candidate Regina Romero—say that it could have serious unintended consequences, including the loss of more than $100 million in annual state and federal funding.

Cunningham doesn't agree with his fellow Democratic leaders on the amount of money they say is at risk if the initiative passes.

"The alarm is inaccurate," he said. "I don't think we'd lose $125 million from the state. I think we'd have to spend a million dollars to litigate to keep our $125 million. I don't agree with the alarm that we're going to lose $14 million in federal funding. What is accurate is that if this (federal) administration stays, when those grants come around, we'll be at a lower point on the list to get those grants renewed. You've got to be fair."

But Cunningham still opposes Prop 205 because he's concerned about a requirement that federal authorities sign an agreement with the city to limit the scope of investigations because it puts the city at risk of not being able to use federal resources during investigations unrelated to immigration.

Williams said he will personally vote "no" on Prop. 205 because of the financial hit the city would take. He has been telling voters that the initiative has nothing to do with keeping families together, and it's about "bringing people in who haven't put a dime into the system to get a vote."

"Tucson deserves to be a free place and a welcome place for immigrants to come," Peterson said. "No more ICE in schools, hospitals, bus stations, a lot of times people are afraid to even go to the hospital because they're undocumented. That's just not right. We need to fix that."