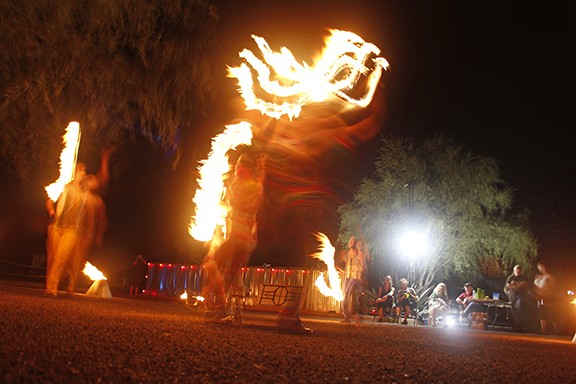 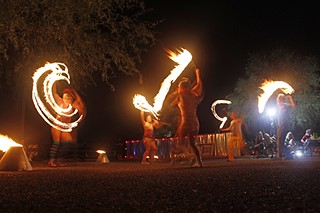 Emily Dieckman
Feel the fire and the fury

People are milling about in groups with dogs (hot, veggie and even a few of the furry variety), exchanging hugs and stories. A few walk by in full circus make-up, or carrying enormous drums. Every once in a while, a group walks by that is clearly performing together (because they're all wearing the same shirts) and clearly artists (because each shirt is cut or tied up in a different way). It's Saturday night, and I'm at Rhythm Industry Performance Factory.

Karen Falkenstrom, director of Tucson's taiko group, Odaiko Sonoram, waves at me from the ticket table. I hadn't recognized her at first because she has a mask over her mouth in reaction to an infected allergic reaction she'd developed a few days before.

Over the noise of a DJ and a gathering of excited artists and patrons, I ask if it might not be better for her to go home and rest.

"I just really gotta see the giant fish," she says. "I'll go home after that."

I settle on answering with a vague nod and a smile, sure I had misheard her, and head inside to watch Odaiko Sonora perform. (Luckily, someone was able to convince Falkenstrom that she should at least take the night off from her performance duties, considering how rigorous the Japanese performance drumming art is.)

The event is a celebration of 10 years of operations at Rhythm Industry Performance Factory (the space was bought in 2006, but not up and running until '07) and also marks the return of the space's quarterly reviews. The quarterly reviews were a part of the space for the first several years, but that having the space to practice meant that artists got better, and busier, so the reviews became too hard to schedule.

Earlier in the week, Falkenstrom gave me a tour around the enormous building, located at 1013 S Tyndall Ave., before it was filled with music and people: past the gender inclusive bathroom and cubbies, into a back room where costumes and stilts for Flam Chen were being constructed and across the 1,400-square-foot sprung wood dance floor. She's been told it's the biggest sprung wood dance floor in Tucson, but doesn't seem to believe it. She built it herself. The artists at RiP do a lot of things themselves.

"Along with teaching really great art forms and performing, we also get to fix toilets and learn carpentry," she laughed.

After decades on the arts scene in both Tucson and Virginia, where she's from, Falkenstrom had witnessed too many artists rent out spaces, completely renovate them, and get kicked out three years later. In 2006, she scraped together $80K for a down payment for a space where artists could permanently and securely create art.

It hasn't been easy. Falkenstrom has to come up with $4,000 a month to keep the space, most of which comes in the form of donations under 50 bucks. It's been a long 11 years, and Falkenstrom is passionate but tired. Earlier this year, she even considered giving up the building.

"Maybe we should just sell the building, cut our losses and say it was a great ride," she remembered thinking.

And then life, and its counterpart, happened. Her father—a musician himself—passed away in June, and she had been there to hold his hand in his last moments. Being able to appreciate that moment, rather than shy away from it, was something that made her stop and reflect.

"The only way I did that was because I've been walking the All Souls Procession for 17 years," she said. "That community event gave me a new perspective on death."

Odaiko Sonora and Flam Chen, a circus, dance and theater group which also uses the RiP space, both perform in the grand finale of Tucson's All Souls Procession, in which people of all cultures come together to celebrate and honor the dead.

Walking and drumming for miles, surrounded by and learning from thousands of other people facing death in all of its stark inevitability, prepared Falkenstrom to face life's other difficult realities.

"I'm going to either have to turn this building around and get everybody reinvested, or I do just have to let it go," she said, wiping away a rogue tear with her colorful scarf.

When she approached the groups who use the space, everyone wanted to help keep RiP alive, and decided together that one of the ways to do it would be to bring back the quarterly reviews.

The space means a lot to the artists who use it and the community who benefits from it. Yarrow King, who teaches African diaspora dance classes in the community, has been renting the space on and off since its inception

"I think it's an amazing space," she says. "I think the artists renting it and using it are really important to the community."

Nicole Stansbury, assistant director of Odaiko Sonora, explains that that the reasons she loves Taiko are the same reasons that she loves the space:

"It is movement and music and spirit and community all in one."

That's also a good way to describe the event. Odaiko Sonora kicked off the night with an ensemble drum performance and then a solo piece by Stansbury. Then came other ensembles, like the improvisational dance group Movement Salon, in which three movers and one musician completely improvised a performance.

"It's been really very special to have a home, and also to feel a part of a community of other movers, other artists," mover Kim Eisele tells me as she comes offstage and gulps down some water. "It feels very supportive, and that feels very necessary when you're trying to do something unusual."

After a group performance from a class taught by King, and a dance class for everyone in attendance, drum and dance group Sol Axé hit the stage with a trio of instrumentalist that erupted into an enormous drum and dance ensemble, and then grew further into a full-blown dance party. A colorful dance performance by Flam Chen, with aerial stunts by Monica Boccio, was followed by audience members pouring outside to watch Flam Chen members do some fire spinning.

When the group members put their torches out, relative darkness fell. And then, from around a corner, like a colorful and creative sentinel of the night, came strutting a pair of fishnetted legs topped by an enormous, glowing fish.

It feels like a prophecy, foretold by a stubborn taiko drummer on antibiotics, has been fulfilled. The audience swarms after the fish and dancers back into the building, and onto the stage, for a dance party that would go on for several more hours.

I can't find Falkenstrom at the end of the night, but, just down the road from RiP factory, I pull up behind a car whose license plate reads "DRUMLDY," and it makes me smile to think that, even if it isn't her, it's someone who loves art, and space to do it in, just as much as she does; and something she told me in the empty building earlier that week rings in my ears: "The space is incredible. What happens here is incredible"

Odaiko Sonora and Flam Chen are performing at the Art Foundation's Lumies on Thursday, Sept. 28, where performances begin at 5:30 p.m. Both groups, along with Sol Axé, will be performing at at Tucson Meet Yourself, which will be Oct. 13-15. All three groups will perform in the Finale Ceremony of Tucson's All Souls Procession on Nov. 5, beginning at 4 p.m. For more information, see rhythmindustry.org.