Pressure grows to find a legislative solution for undocumented youth

By Danyelle Khmara and Melissa Vasquez 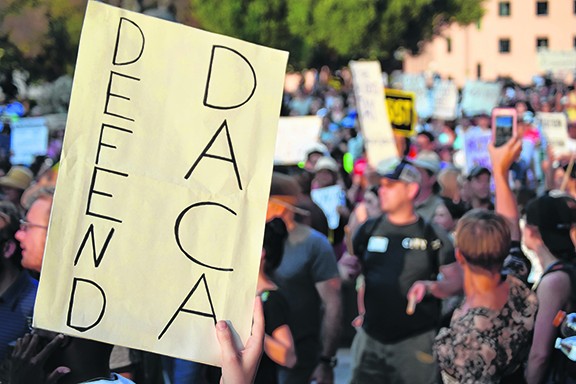 But with the Dems' quick cave and President Donald Trump's subsequent immigration proposal (dismissed by the American Civil Liberties Union as a plan that would only benefit white supremacists), Dreamers still have plenty to worry about.

Trump's proposed plan, released Jan. 25, would allow around 1.8 million DACA recipients and Dreamers—undocumented immigrants brought to the United States as children—an opportunity for citizenship. But it also includes a demand for $25 billion to fund construction of the border wall and increased security measures, as well as drastic cuts to legal immigration.

Lorella Praeli, ACLU director of immigration policy and campaigns, said in a press release that the administration's plan is a "hateful, xenophobic immigration proposal" reminiscent of racist quotas from the 1920s. She said it would delay legal immigration passage for African refugees and cost taxpayers billions for a "wasteful wall" and tighter border security such as an increased number of agents.

"The crisis facing Dreamers and their families is urgent, but addressing it must not come at the expense of using immigrant youth as bargaining chips, devastating border communities with harmful, wasteful walls and agents, or taking this nativist screed seriously," Praeli said. "This proposal should be deemed dead on arrival."

The shutdown had given local DACA recipient Ana Laura Mendoza a short-lived hope that Congress would finally do something, but now she's just frustrated by the "lack of action from both parties," she says. "Democrats are full of empty promises and rhetoric.... Once again, it was made public that our lives are not as important as they claim."

During Donald Trump's 2016 presidential campaign, he promised the day he took office, he would end DACA. Although he didn't do so until almost eight months into his presidency, the DACA recipients' purgatory began the day he was sworn in.

Mendoza says combatting the drawn-out emotional struggle is the worst part. She just wants to know if she'll have legal status. A second year political-science major at the University of Arizona, she's unsure if she'll be able to fulfill her aspirations of law school. She's unsure if all the effort of college will even matter: What good is a degree if you're not allowed to work?

Earlier this month, a federal judge ordered the Trump administration to temporarily continue allowing DACA recipients to renew their protected status. Mendoza was one such Dreamer who didn't make the cut for the previous deadline the administration had set. Nonetheless, she has mixed feelings: happy she and others like her could renew but upset for the prolonged uncertainty.

Without a fix for DACA, Mendoza will lose her work permit as she's finishing her bachelor's. She will also lose her driver's license, not to mention the ability to walk out her front door without the fear of being deported.

A bipartisan group of senators calling themselves the "common-sense coalition," led by moderate Republican Sen. Susan Collins of Maine, is meeting this week to consider Trump's proposal and make recommendations.

"All of us realize that it's going to take a compromise on this issue for us to get something done," Collins said on CNN's "State of the Union" on Sunday.

Any compromise the president will sign may be bittersweet for those who have been in the trenches, demanding a fix for DACA, like Democratic Rep. Raúl Grijalva, who called Trump's proposal "an attack on immigrants and American values," in a prepared statement last week.

"Since assuming the presidency, Trump has declared open season on this nation's immigration policy," Grijalva said. "Whether attacking the refugee program, enacting a racist travel ban, or unleashing ICE agents to terrorize immigrant communities, Trump has demonstrated a willingness—if not an outright desire—to destroy our immigrant heritage."

Mendoza says she can't get behind the idea of any compromise that includes border security measures.

"It's so easy for us to be used as pawns," she says. "I'm not OK with allowing one part of my community to be attacked while another is safe... It's not just legislation that's being decided. It's who gets to thrive and who gets to hardly make it."