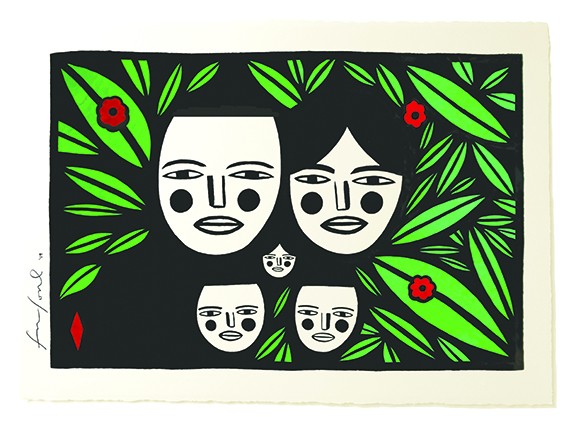 Courtesy photo
“Altruistic Benevolence” by the Fortoul Brothers, ink on heavy archival paper, 2019, is on display at the Louis Carlos Bernal Gallery through Oct. 4.

Gabriel and Isaac Fortoul are the children of immigrant parents from Colombia, and they were born and raised in the teeming immigrant town of Union City, New Jersey.

But for the last five years, the brothers have been living in Phoenix, where they've been winning acclaim for bold public art murals and last winter had a major an installation in the Phoenix Art Museum.

By now they're steeped in the southwest desert and its immigrant stories. Their newest work, on view at the Bernal Gallery at Pima College, touches on both their own family history and the very different migrant journey across the Arizona desert.

Half of the works conjure up today's desperate Central American refugees struggling toward a safe haven in the U.S.

We see these terrified asylum seekers in "Indomitable Resolve 1 & 2." These two paintings depict a mother and father running for their lives past the American border wall, tiny children wrapped in their arms.

In #1, the woman holds on tight to two babies—we can see only their little faces, one above the other. On her left is a border wall as red as blood; on her right a prickly cactus; at her feet a rattlesnake. The desert floor is dry beneath a darkening blue sky. But the determined woman runs through every danger she encounters, her black hair flying behind her, her kids tucked in her embrace.

The father, in #2, facing the same obstacles, dashes along the wall with his little girl, her own mane of hair taking to the wind.

The ink paintings of this family are right up to the minute—just last week, a migrant mother and her toddler drowned in the Rio Grande, while trying to reach the father and other children already in the U.S.

"Art is a way to document what is going on in the world at a particular time," one of the brothers points out in a gallery video. "It also is a way to showcase beauty."

Their limited palette of rich colors—yellow ochre, stark red, sky blue, cactus green—is beautiful and so are the thick black lines they use to shape bodies and landscape. But the fierce love of parents for their children is another kind of beauty: they flee their homes to keep their kids alive.

"We Will Make It 1 & 2" pictures the same devoted parents, same kids, starting out on the journey with courage and hope. The parents' careful preparations to keep their little ones safe in the perilous desert show up in "Journey Ready 1 & 2." Walking under a blazing yellow sun, both parents balance a jug of life-saving water on their heads.

Once their battle with the border and the barricades is done, the family delights in the Promised Land, where they can work and feed their kids. A series of four small ink drawings called "Plenty for All" pictures a parent growing a plant, a bowl overflowing with fruit, two kids eating and a mother's breast bearing endless milk.

The other half of the suite is a more abstract celebration of family. The exhibition is bookended with expressionistic paintings of the extended Fortoul family, portrayed as a kind of everyfamily. Rooted in land and culture, the Fortouls, like other migrant families, have nevertheless moved far from home to find a better life.

The opening piece is a stylized portrait of the clan. Five heads float among green tropical plants against a black background; the two largest heads are the parents who emigrated from Colombia; two medium heads are the sons, born in the USA; a tiny girl's head is the American granddaughter, Isaac's daughter.

In the final works, the family paintings grow into elaborate genealogies, honoring uncles and aunts and cherishing the memories of those left behind.

The family portraits loom as large as landscapes in "Cosmic Dream of Unity, Quadriptych," a gigantic four-part painting of acrylic on canvas. The father's head floats above like a moon at one end, the children twinkle like stars at the other. But in the middle is the mother whose copious black hair cascades like a mountain range across the canvas. She's a giant mother earth, ferociously protecting countryside and kin.

An unrelated piece, "Seeds of Hope," is as optimistic as that powerful mother is. It's a massive vertical statue that stands like a totem pole in the middle of the room. Made out of plastic water jugs, painted a graphic black and white, it signals a way out of our troubles.

Water jugs save lives, of course and so do seeds that bear food. At the bottom of the totem pole—held in place by bricks reclaimed from an old Phoenix building—are seeds and pods from the moringa tree, a species the brothers raise in their Phoenix backyard. The moringa is a symbol of resilience: every bit of the tree, from bark to leaves to roots, is edible, and it thrives even in the harsh droughts—and politics—of 21st-century Arizona.

The amiable artists have also included a video that clues us in to the spirited multicultural street life in their Union City birthplace. The video documents the pair painting a mural high up on the façade of a faded old building, rolling out their greens, splashing on their reds.

Down below, going up and down those streets, are kids on bikes, babies in carriages, a truck bearing fresh mangos. And a young boy gazing up at the painters, marveling at their art.