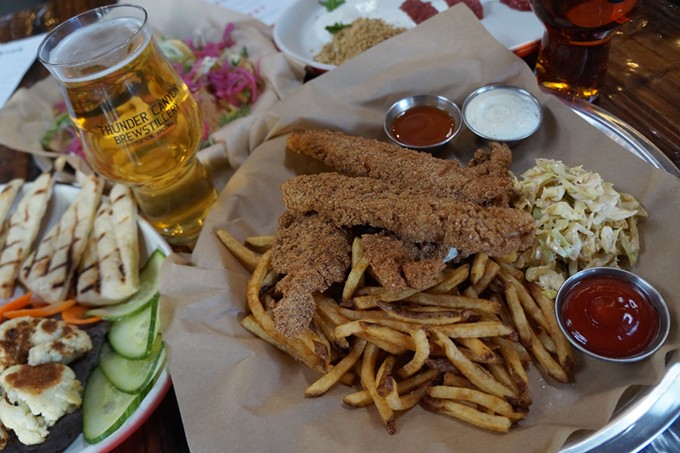 TCB has upped their food game.

Last year, after 20 years of being in business, the Thunder Canyon restaurant in the Foothills Mall closed. Sure, it was a blow, but they still had their downtown location to carry the brewpub concept torch. Thing is, Thunder Canyon is one of those Arizona success stories that grew so much as to where focus tightened on the big money maker, their beer. Unfortunately, the dining business side started to get a little fuzzy. The food was fine, passable at best, but to keep up with their fantastic seasonal and best-selling brews, the kitchen needed to get up off the couch and become more serious.

Knowing this and knowing they are in the storm eye of a downtown culinary cyclone, the smart higher ups decided that the Thunder Canyon menu had to be completely reimagined. The beer has always had a distinct and commanding voice; now it was time for the menu to speak for itself.

First order was to get a talented chef in, dismantle what they had, survey the good from the bad and build it all back up. Matt Kraiss has been cooking in Tucson for nearly two decades, and, if you dine out on a regular basis, have most likely eaten food cooked or created by him. From bussing tables at HUB, Matt moved on to cooking at the original Lindy's on 4th before segueing into Fox restaurant concepts such as North and Zinburger. After that, he had a brief stint at Downtown Kitchen with Janos Wilder before commanding the back of house at Ermanos for more than two years as executive chef. To say the least, Kraiss knows his way around a kitchen and, best of all, he knows what we want to eat.

Kraiss said that Brian Miller, Thunder Canyon's general manager, approached him in January with a plan to "move into a whole new direction.

"Before that, Thunder Canyon was just cooking out of cans and bags, like really uninspired food," Kraiss said. "Honestly, if you are not making your own food from scratch, you're just fronting."

Transitioning from Ermanos to Thunder Canyon was not only an easy decision for Matt, but an exciting one. With a decent budget and enough room to play around and get his hands dirty, Kraiss has painstakingly constructed a menu that finally compliments the delicious beer we have all come to know, love and be Tucson proud of.

"We house cure our own bacon," Kraiss said. "We make our own pastrami. Our own sauerkraut. We even house make our own yogurt and bake our own bread now. It's hard work but it is possible. When you taste that quality, it makes a dramatic difference and that's what Thunder Canyon wanted and has become."

The meats are sourced from farms no further than 100 miles of their Broadway block zip code and produce is supplied by Tucson's own Merchants Garden. Transforming the food of Thunder Canyon to resourceful and thoughtful grub is a tasty feather in our downtown restaurant scene's cap. It's nice to walk into the huge industrial space, order a craft beer and have a dish such as black bean hummus ($12), served with fresh vegetables and grilled house baked flatbread. It all pairs well with one of their IPAs or red ales. It may sound a little weird, but the cryptically named scallop bread ($11) is actually very fun and engaging. The bay scallops are pan seared with a leek-infused whiskey cream sauce, then finished with champagne vinegar pickled celery before being affixed on a house ciabatta.

I really enjoyed the squash tacos ($12), which are complimented with freshly made chips and a salsa spiked with Thunder Canyon's Sky Island IPA. They marinate the summer squash in their Deep Canyon Amber Ale and top it with a dilly goat cheese, farm fresh tomatoes, pinto beans and scallions, which accounts for a richness steeped with a vivid finish. But after a few brews, you need to get acquainted with the juicy caprese burger ($13), which features a fried, hand-pulled, house-made mozzarella patty sitting on top. I didn't know if I wanted to punch or hug Kraiss for this pure decadence and finite deliciousness.

Thunder Canyon has moved on from just being a brewery into something called a "brewstillery." There's a full bar and they're making two styles of their own rum: a silver and a spiced. Its amazing what a little ingenuity paired with a lot of hard work can actually do.