Despite trash and drought, life still finds a way

Spring is here. To be more precise, it arrived at the end of the first week in January, the day after the big New Year's rain let up. On Thursday, Jan. 6, the plant and animal worlds shook themselves off and got started on the real business of life. The seasons had once again pivoted on the hinge of winter solstice. The days were getting longer and the sun, thank God, was moving up out of our eyes and higher into the sky. In short, it was time to be up and doing.

In more temperate zones, there's a lag between the hemisphere's most acute tilt away from the sun and the arrival of spring, but here, it's nearly simultaneous. (On the other hand, we enjoy three to four months of summer after the other solstice in June.)

Already, the fabulously tenacious violets that have spread all along the deepest north-side shade of my house are in full bloom, and the sun-loving globe mallows further out are suddenly back from the dead; birds are making a racket and flying around with twigs in their beaks; mesquites are turning yellow as this year's leaves start to push out last year's; fine grasses have blanketed the pastoral sections of the front yard with their tender, naïve green.

We don't need daffodils to tell us what's up.

Walking along the raggedy piece of Arcadia Wash that runs through my neighborhood, you can see that what's happening is not a wholly suburban phenomenon. The pair of kingbirds in the big palo are back in action, just the two of them now caroling away but falling silent when my dog and I come close. Last fall, they'd be up there fluting every late afternoon with their single young one, who's now presumably gone off to find a palo verde and a mate of her own. A dozen yards farther along, a pair of solidly bourgeois Abert's towhees have set up housekeeping. Their base of operations seems to be in one of the yards that backs up against the arroyo, but they're often in the wash and the wasteland beyond, scrounging for nesting materials. I've also been seeing cardinals lately, but haven't been able to tell whether any are settling in.

The usual suspects--the thrashers, Gila woodpeckers and mockers--are just beginning to tune up. A singing duel between thrashers is a delightful thing. These big, elegant, fierce-eyed birds with the long, hooked bills sing like musical theater stars, and while the volume and definition of their song suits them, its beauty is surprising. In a month or two, the delicate and haunting song of the common white-crowned sparrow will begin wafting over from deep within an old eucalyptus two yards over. I haven't heard it yet this year, nor are the male hummingbirds ready to begin their spectacular aerial courtship displays. Along with other deeply heat-committed natives like chollas and saguaros, they wait for settled warmth.

All this life swells and scurries along a grim little urban wash festooned with white plastic shopping bags, fast-food detritus, broken shopping carts and the occasional mattress. The arroyo has been steadily degrading since we moved in 15 years ago: Then, there were Arizona fence lizards in the Bermuda grass that infests the slopes, and you could hear the chorus of spadefoot toads after the August rains from blocks away. Last year, there were so few calling that you could pick out individual voices. I haven't seen a verdin or an owl in the wash for years--they used to be common there--and the vermillion flycatcher I glimpsed once has never come back. The drought is responsible for much of this, I'm sure: The water just hasn't been there.

But the plastic trash that the gully-washers leave hanging 6 or 8 feet up in the mesquites and desert broom is worse all the time and has nothing to do with the weather. The heart-breaking wreckage of the Sonoran Desert is playing out in miniature in the arroyo.

Still, wonderful life, as Stephen Jay Gould calls it, is always waiting for an opening, any sort of chance at all. A diving beetle, of all things, nibbled at my leg the other day in the pool at the Racquet Club. When I caught it and put it up on the cool deck, it scrambled irritably along the most direct route back to the edge, hopped back in and paddled straight back down to the bottom. Where could such a critter have come from? How could it possibly have gotten there? What had it found to eat?

Nature, we have reason to hope, will keep on trying. 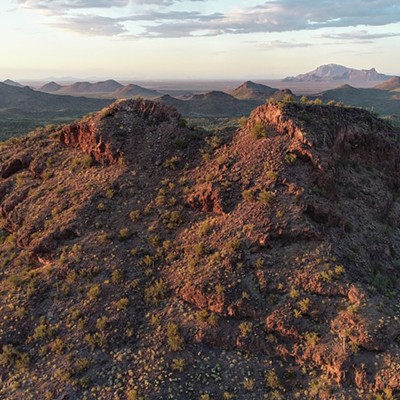