The worst thing parents of a teenager can do is allow themselves to think about the stuff they did when they were young. Kids' universal conviction that their parents are so cruel because they don't remember what it's like to be young is exactly wrong: It's the parents with vivid memories who are the biggest killjoys. I'm told this goes double for men, most of who seem to have horrifying stories involving the radical misuse of cars. Looking back, they get sweaty-palmed over the chances they took and start making systems of rules. Not that it makes any difference. The young, like all other humans, are going to do what they want, one way or another, sooner or later. It is, therefore, the wise parent of an adolescent who prays not that the kid won't do anything dumb, but that he never hears about it.

It was physical evidence of a very near thing that got me thinking about this. Walking my dog in the wasteland at the edge of my midtown neighborhood, I noticed a couple of weeks ago that a 10-foot section of the steel safety railing along Arcadia Wash had somehow been bent out, way out, over a channelized stretch of the gully. When I say bent, I don't mean dented; I mean bowed down and out to a more than a 45-degree angle. At the east end of the curve, a welded join in the top bar had popped apart, while a join at the other end had given way with such force that the top bar was bent up and away at a violent, crazy-looking angle.

Let me emphasize again that the rail is made of 2-inch steel pipe. I wondered vaguely about the semis and front-end loaders behind the big Target: Whatever had done the damage had to have ridden right up on the railing to bend it that way. And yet there was no steaming heap on the concrete 10 feet below--only the usual disintegrating shopping carts and shoals of litter.

The scene was so surreal that I thought I must have dreamt it. But no, so it was the next night. So it still is.

When a friend went out walking with my yellow dog and me last week, I was relieved that he was as impressed by my private crime scene as I had been. Feeling all forensic, we scrambled down into the wash and up on the other side to take a closer look. There, we found the answers we were looking for. It was thrillingly CSI.

It hadn't rained for two months, and the dust of a small dirt flat above the wash--accessible from East Broadway Boulevard--was scored with innumerable circling tire marks. Somebody, several somebodies, had been turning smaller and smaller circles in some kind of narrow vehicle--our guess was one of those little high-and-tight Jeeps that rich UA kids go for. One set of deeper, more churned-up-looking tracks took off from the circle, heading straight towards the bent place in the railing.

"Skid marks," said my friend with authority. Then, a yard or so from the railing, the marks disappeared at the top of a hump of dirt a couple of feet high--still right in line with the big sag.

Our finding: Kids had been squirreling around in the lot. Someone lost control and skidded toward the wash, bounced up over the dirt pile and came down with enough downward momentum to bend the railing over. Only the top rail stopped the vehicle from diving head-first into the wash. And there it must have sat, its front end out in space and only the snapping, creaking rails to hold it.

"Males under the age of 25," said my friend. He was once one of these, so I took his word for it.

Mundane questions, like how they got it off the railing--sometimes four-wheel drive actually comes in handy--and how the kid explained the damage fade before the thought of what that midnight ride must have been like.

"Just think," I said, "If there was a girl in the vehicle, how mad she must have been."

"If there had been a girl, this wouldn't have happened," said my friend.

What's certain is that there's a kid somewhere in Tucson who's still shuddering, and a couple of parents who are lucky enough, I hope, to know nothing about it. 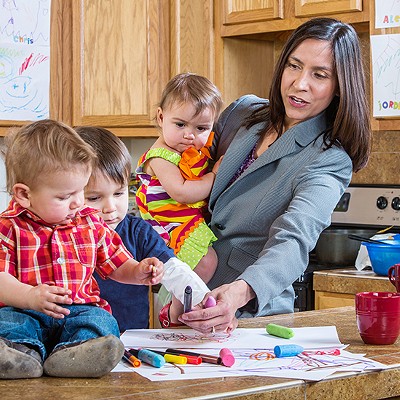