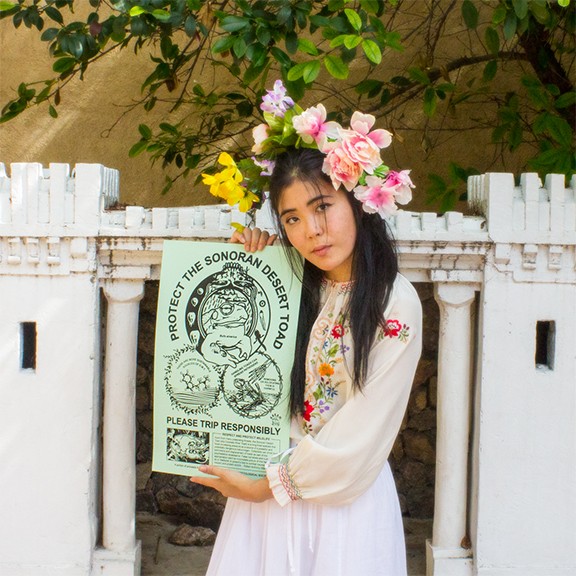 Courtesy photo
CREAM’s newest design is based off a 1984 pamphlet and promotes environmental stewardship toward the Sonoran Desert Toad.
The Sonoran Desert Toad faces similar risks as any other desert creature: habitat destruction, climate change and changes in the food supply. But this toad in particular faces the extra risk of being captured by humans searching to get a high off its rare and powerful psychoactive poison.

As far as researchers know, the Sonoran Desert Toad is the only animal on Earth that produces 5 MeO DMT, a fast-acting psychedelic chemical. It's very unusual, according to local naturalist Robert Villa, because there's nothing significantly different between this toad and other toad species, except for that one detail.

5 MeO DMT is a Schedule 1 narcotic. It's federally illegal to hunt the Sonoran Desert Toad with the intention of smoking its skin secretions. Users will typically squeeze a gland behind the toad's eye, collect the discharge, dry it out and then smoke it.

While this process alone won't kill the toad, the continual practice places harm on the species.

"This animal only offers its skin secretions as a defensive mechanism," Villa said. "So there's no real humane way to do it."

5 MeO DMT can also be synthesized in a laboratory or extracted from certain plants. This would be the most ethical way to use the substance, but Villa says there are still some people who are convinced that the experience from toads is inherently unique, even though it's the same molecule.

This summer, Villa partnered with his friend Patrick Foley who co-owns CREAM, a print shop and design studio located downtown, to create an informational art campaign focused on the Sonoran Desert Toad.

Their message is simple: Leave the toads alone.

They decided to reverse-engineer a popular pamphlet published in 1984 called "Bufo alvarius: The Psychedelic Toad of the Sonoran Desert." The literature promotes smoking the toad's secretions and even provides a step-by-step guide on how to do so.

Foley and Villa's version builds off the pamphlet's imagery, but instead promotes environmental stewardship toward the toad and highlights the unethical nature of using its poison to experience a trip.

They released T-shirts, bandanas and posters in mid-July and quickly sold out. They've been printing to order ever since, and part of the proceeds go to the Tucson Herpetological Society, which Villa leads.

"That definitely is in line with CREAM's mission of sustainability and community," Foley said. "If we're going to be talking about it and saying things about it, we need to make sure we put our money where our mouth is."

In an episode of Hamilton's Pharmacopeia from 2017, which features Villa, host Hamilton Morris introduces this famed pamphlet and goes on a quest to find the author, who published under the pseudonym Albert Most. Morris believes he was the first person to smoke the toad poison. The experience is described in the show as a psychedelic effect so intense that it can cause "complete dissociation from consensus reality."

However powerful it may be, Villa wants to cut out all the mystique surrounding this practice—for the toad's sake. While working on the Pharmacopeia episode, he said his main goal was to portray an accurate social history of the toad.

"I was sort of trying to dispel the false story of it being an Indigenous custom, when in fact it was discovered by western culture, by white guys," Villa said.

Similar to the saguaro, the Gila monster and the desert tortoise, this toad is endemic to the Sonoran Desert. Villa says they've evolved with the environment overtime, which makes it a relatively new species.

After its initial discovery, the practice of smoking toad poison took hold in Mexico, where it found popularity as a form of naturopathic medicine. There were claims it could eliminate addictions to hard substances and relieve some symptoms of PTSD.

"Kind of like a reset or a defrag," Villa says. "The problem with that is, you're only sober for so long unless you have a community to keep you sober. So you can imagine in underserved communities how it's a cyclical thing where you're hooked on meth or opiates, and you don't want to do it anymore so you smoke this stuff, but you can only go so far until you're coaxed into doing it again. That's problematic."

As the practice became more common in Mexico, Villa says it was conflated with a new-age vision of Indigenous cultures, as the "natural" or "holistic" way to medicate.

"Toad imagery features prominently in Indigenous artwork, but there's no archaeological evidence that supports the idea that Indigenous people smoked this substance," Villa said. "And even if they did, it's ethically problematic to profit off Indigenous imagery and culture in order to validate smoking this."

However, there is a growing community of people who administer "toad medicine" for proft. A quick Google search shows advertisements offering a one-hour supervised session of toad-smoking for $200.

Villa says the fact that they're calling it medicine is unethical, because it misrepresents the substance and hides the dangers of it.

"As more people do this, the sample size is getting bigger and we're noticing there are people who don't respond well and there's a small set of deaths associated with using this," he said.

Not only is it dangerous to humans, but it's dangerous to the continuation of the Sonoran Desert Toad as a species. Villa says we are potentially on the cusp of a "passenger pigeon scenario," where people assume there are millions of these animals in existence, so they will never go extinct. But that type of careless attitude is how a lot of common species lose their numbers.

While the toad is not endangered "on paper," it has been affected by the presence of human civilization in the desert. There have already been local extirpations of the Sonoran Desert Toad in Sonora, Mexico, because of poaching for recreational use of their poison.

Toad enthusiasts will sometimes collect large numbers of the animal and attempt to breed them. The problem with this, according to Villa, is they will often bring in toads from different places which can create a vector for chytrid, a fungal disease spread between amphibians through direct contact or exposure to infected water.

There was even a proposed seven-acre "toad sanctuary" west of Tucson off Ajo Highway. Villa says introducing a large population of toads with no clear idea of how it will affect the existing ecosystem, could have detrimental consequences.

Much like other animals and plants in the desert, the Sonoran Desert Toad has adapted to be dormant during the dry season. They live underground in a cocoon of skin that helps them retain water, because their skin is very porous.

Villa says it's a combination of auditory and moisture signals that cause them to emerge from the ground, usually right before monsoons begin to roll in. This is the time of year that the toads are most often seen in the wild, and sometimes cross paths with people.

"They tend to be okay with human-modified landscapes," Villa said. "As long as there have been electric lights in the desert, there have been toads eating the insects attracted to those lights. So that makes them very susceptible to being collected."

Foley has personal experience with the toad poison, having smoked it when he was younger. Since then, his interest in the Sonoran Desert Toad has shifted to a place of conservation.

"Even at that time, as someone who cares about animals in general, the process of getting the toads, transporting them, milking them, you kind of intuitively know it's traumatic to the toad," Foley said.

Over the years, he's had conversations with Villa about the experience, and began thinking about how the more people view the toad as a source of medicine or recreational enlightenment, the more it affects their ability to survive as a species.

"That crystallized in my mind, that is definitely a way the toad could be talked about and celebrated during monsoon time, making some images to go along with those ideas that I talked to Robert about," he said.

CREAM's imagery features a central picture of the Sonoran Desert Toad, which resembles the rendering in the 1984 pamphlet. It's complemented by two smaller images of the 5 MeO DMT molecule and a human hand making contact with the toad's skeletal body.

Pointing out alternate forms of sourcing the drug and highlighting the dangers of spreading disease through cultivation of the toads, the campaign urges viewers to "please trip responsibly."

"Their heart is in the community and in the environment, so I'm very grateful to CREAM for their generosity," Villa said. "This campaign is an effort to promote a sense of natural patrimony, natural heritage, and it has inherent value as a species, even if it doesn't benefit humans directly. This is something that we are the stewards of as residents of Tucson and the Sonoran Desert."