Can a Trump-loving Republican unseat Democratic Congressman Tom O’Halleran in the Year of the Resistance?

“Voters want a conservative veteran who supports the president and the Constitution, who isn’t a career politician, and who will listen to the people by being available,” Wendy Rogers said in an email.

Republican Wendy Rogers is hoping to flip Arizona's Congressional District 1, a seat held by Democratic representatives since redistricting created a competitive district ahead of the 2012 election.

During her primary race, Rogers touted her support of President Donald Trump and his agenda, which may have helped her win against two opponents, Tiffany Shedd and Steve Smith, who gave up his Legislative District 11 Senate seat to run for Congress.

Rogers wouldn't speak with the Tucson Weekly by phone but answered questions over email. She said she won her primary because "voters want a conservative veteran who supports the president and the Constitution, who isn't a career politician, and who will listen to the people by being available."

CD 1 is a sprawling and diverse district that includes the areas of Oro Valley, Marana and Casa Grande in Southern Arizona as well as Flagstaff and Northern Arizona Indian reservations and much of rural Eastern Arizona. It's highly competitive, with 36 percent of registered voters in the Democratic Party, 31 percent Republicans and 31 percent independent voters.

So far, political prognosticators are giving the edge to O'Halleran. FiveThirtyEight's forecast of House races puts the race in solid blue territory, giving Rogers a 1 in 30 chance of winning, while RealClearPolitics.com and Roll Call's Inside Elections with Nathan L. Gonzales both put CD1 into the "Lean Democrat" column.

If Rogers is going to win, she'll have to garner the independent vote. She said she thinks she'll pick up those voters because, like all voters, independents want "fiscal responsibility, a representative who will listen to their concerns, and a non-career politician to shake things up." 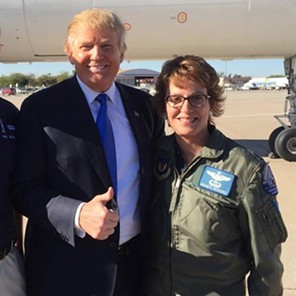 Rogers first ran for elected office in 2010, losing a state Senate race to her Democratic opponent. She ran for Congressional District 9 in 2012 and lost her primary by only 700 votes. In her second run for CD 9, in 2014, she handily won her primary but lost the general to Democrat Kyrsten Sinema. Rogers first ran for CD 1 in 2016 and lost the Republican primary, coming in third.

During the current CD 1 primary, Rogers attacked fellow Republican Smith, saying he worked with a modeling firm that was linked to human trafficking. Smith denied the claims, and some conservative elected officials and organizations came to his defense. The SaddleBrooke Republican Club condemned Roger's attack ads.

"It is Board policy to never support one candidate over another but the Board Members cannot stand by silently under these circumstances while Ronald Reagan's 11th commandment, 'Thou shalt not speak ill of any fellow Republican,' is being violated," wrote SaddleBrooke Republican Club President Patricia Tarner on the group's website.

Tarner didn't respond last week to a request for comment on whether the group would be supporting Rogers in the general election.

Rogers has already begun attacks on O'Halleran, saying the congressman is "a piece of work—truly dedicated to stopping the #MAGA agenda" and California Congresswoman Maxine Waters' "political soulmate."

Rogers is endorsed by pro-life group Susan B. Anthony List, who wrote in a statement that "she will be a formidable opponent of the radical abortion lobby in Congress, fighting to protect unborn children and their mothers and stop taxpayer funding of abortion giant Planned Parenthood." 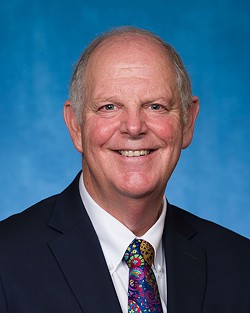 "The contrast between Wendy and incumbent Rep. Tom O'Halleran could not be clearer," wrote former U.S. Rep. Marilyn Musgrave and SBA List's vice president of government affairs. "O'Halleran is an extremist who voted to keep painful late-term abortions legal through the moment of birth."

Musgrave is probably referring to O'Halleran's no vote last year on a mostly-partisan bill that would have made abortions at 20 weeks or more a federal crime, with a penalty of up to five years in prison. Most states already regulate late-term abortions. According to the Guttmacher Institute, 43 states prohibit some abortions after a certain point in pregnancy.

Rogers has also called O'Halleran a radical leftist and socialist, but others would categorize the former Republican lawmaker as more moderate. O'Halleran served as a Republican state lawmaker from 2001 to 2009. He ran for the state Senate as an independent in 2014 and lost by less than 3 percentage points. And in 2016, he ran as a Democrat for the first time and won his bid for CD 1. According to political website FiveThirtyEight.com, O'Halleran votes with Trump 54 percent of the time.

O'Halleran says he became a Democrat two-and-a-half years ago because he tried to change the Republican party from within, working across party lines on education and healthcare issues, but saw the party continuing to go in the wrong direction. He says he continues to work with "a lot of good Republicans" and to co-sponsor bipartisan bills.

He's on the Problem Solvers Caucus, which has 24 Republican and 24 Democrats and makes bipartisan reform recommendations to Congress. A member of the House Committee on Agriculture, O'Halleran says one of his priorities is passing a farm bill to help farmers in his district.

Other top priorities include attracting well-paid jobs that retain Arizona youth and making sure there are incentives programs that help rural Arizona compete for those jobs, as well as supporting education, healthcare, the Social Security system and getting to "a level at which rural America can be treated well."

"We're trying to work in that direction so that there's an understanding between the urban environment that feels that they're the center of the universe and the semi-rural and rural environments that have the people that provide the food and the water, the pipelines and roadways and trains and everything else," he said.

"We have to have a strong rural economy and make sure the quality of life of those people is good enough and the health care is good enough so that they're willing to stay there and do these hard jobs."

He says the diversity of CD 1 requires a representative who can listen to a variety of different needs. He added that independent voters only need to look at his record in the Arizona Legislature and in Congress to see he "goes with his conscience" and votes on the issue rather than along party lines.

"We, as Americans, have to start to look towards electing leaders that have had a solid record of working with others," he said. "If we don't, then we're going to continue down this path that we've been on a couple decades or more of just partisanship and not being able to be pragmatic enough to find solutions for the American people and the people of Congressional District 1."