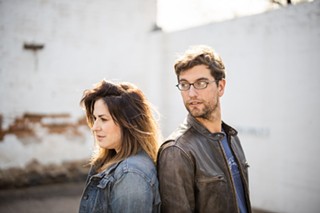 Unless we're in the middle of the monsoon, it's rare for a Tucson concert to get rained out. It's almost unheard of for a show to get rained out twice. But for folk outfit Sweet Ghosts, the lucky number might just be five. Their latest album, An Endless Blue, released more than a year ago at this point, but they're hoping a June 16 show will be the chance to finally perform the album live, after being delayed twice due to weather and twice due to COVID. For a lesser collection of songs, the towel may have already been thrown in—but An Endless Blue is worth celebrating.

"There was almost a kind of awe that it kept happening again, especially the rain-outs. The COVID ones at least were on us for cancelling because it didn't make sense to play a show, but the rain-outs were baffling, because it doesn't rain here," said Ryan Alfred, who fronts Sweet Ghosts alongside Katherine Byrnes. "So it goes."

Although recorded before the pandemic, An Endless Blue is a prescient album in many ways, coming from a place of uncertainty and an attempt to make sense of things larger than one's self. Released in the infamous March 2020, the band even dedicated all of the album's proceeds toward the Tucson Musicians COVID-19 Relief fund. But with stages repopulating, it's time for Hotel Congress attendees to finally hear live performances of An Endless Blue's vast, heartfelt songs.

"Now we're in this weird wishy-washy period where there are gigs, but not a ton. We're all trying to figure out how to cobble together a living in a world that is sort of half-open," Alfred said, who also works as production manager at Hotel Congress.

A simpler album may have stayed in the year it was recorded or released, but An Endless Blue, with its varied sounds, shifting layers and open interpretations, seemed to change its meaning as the pandemic took over and then shrank away. (Aspects even seem a little too prophetic, including a recurring lyric of "What were we waiting for?")

Reflecting its open and vibrant blue-sky artwork, the album opens with a delicate piano passage, empowered by sweeping strings and ambience before Alfred and Byrnes step forward with their signature vocal harmonies. The truly sweet title track sets the themes of wide-open spaces and connection.

"A lot of the lyrics, and even the moods and environments I was aiming to interpret, there was an intentional drive to be in a calmer place, sort of as a reaction to not being calm myself," Alfred said. "There was a lot of wondering about the world and how I relate to the world and how we relate to each other."

With such a gorgeous opening, listeners could be content with the chamber folk style throughout, but the sky contains clouds and thunder as well. The track "Back to Tucson" is a bona fide desert blues anthem, while "Crusher" is a darkly distorted soundscape. But it all comes together with a theme of trying to understand, but at the same time acknowledging that some things aren't able to be understood.

"I often feel adrift and go through periods where I feel loved by my friends and family, and periods where I feel alienated or angry, and trying to get better about not placing too much emphasis on those feelings. And I think 2020 was just one long exercise in surfing those waves between having periods of loneliness and seeing friends. But even then it was often out in a park and only feeling connection for a few hours," Alfred said.

While Alfred and Byrnes' interplay takes center stage, the beauty of the record is also due to a variety of local musicians. An Endless Blue was recorded in early 2018 at Landmark Studios by Steven Lee Tracy. Those recording sessions included Ben Nisbet and Emily Nolan on violin, Sarah Toy on viola and Luciana Gallo on cello. Other local musicians, including Angelo Versace on piano, Gabriel Sullivan on bass, Winston Watson on drums, Mike Moynihan on horns, and Karima Walker with her signature experimental ambience also added to the project.

If this sounds like a large ensemble, it's because it is. And their collaboration shines large and bright, even when the tone takes a somber turn.

"I really only enjoy recording music for Sweet Ghosts with a full ensemble. That particular music, the way I conceive of it, has so much ebb and flow to it that proves really hard for me to maintain a vision for it while building it one step at a time," Alfred said. "That's why we did this last one with all six of us in a room playing the songs together, that way we could hear it as it was coming together and quickly identify if things were boring or beautiful."

Alfred says the album's title and inspiration references those unfathomable spaces, such as endless skies or great oceans and one's own inconsequentiality in the face of them. There is also a running theme of a relationship intermingled with this, such as the opening lyrics to the song "Things We Can't Unsay": "In a storm of angry words / All that we have made is blown away / Fickle is the wind, and the calm will come again / But not all wreckage is remade."

"In my own life, I understand better what's really important to me, but it surprisingly makes me less sure about how I understand people and how I feel like I should move through this world," Alfred said. "I think a lot of the lyrics on that record came from that place of wanting to acknowledge that and feel comfortable with it."

As An Endless Blue is more than a year old, Sweet Ghosts do have some material for a new album. Alfred says nothing definite is planned, but "it will come." The pandemic and social distancing especially complicated this musical style, which often saw six musicians performing in the studio at once.

"That's not to say all music must be made that way, I recorded [A Sudden Rush of Noise] completely alone and enjoyed every moment of it. But for the music with the Sweet Ghosts name, that batch of ideas is so much about communication, and improvisation not in the song forms but in how the performers interpret them. That's really what makes that music breathe to me."

In the meantime, we can be glad shows are being booked again, and we're slowly headed Back to Tucson.