Legislative District 11 candidates disagree on just about everything 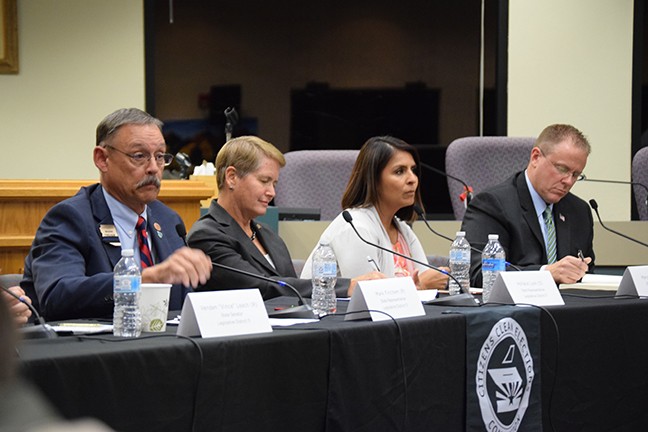 The four candidates in the race for two Legislative District 11 seats in the Arizona House of Representatives don't agree on much.

The Republicans—incumbent Rep. Mark Finchem and City of Maricopa Constable Bret Roberts—are mostly in line with the conservative school of thought that dominates at the Legislature: Cut more taxes, divert public funding for education to private schools, reject limits on firearm ownership and secure the border.

One high-profile battle on the education front is the ballot referendum Prop. 305, which, if passed by voters in November, would dramatically expand Arizona's Empowerment Scholarship Account program, or school vouchers.

Finchem, a Republican who's running for his third term, said providing quality education is one of his top priorities. An advocate for Prop. 305, he doesn't think taxpayer education dollars should exclusively support public school.

The current ESA program is providing around 3,000 scholarships to children with disabilities and other vulnerable students. The expansion would make about 30,000 scholarships available for any K-12 students—increasing the pot of taxpayer money eligible to move from public schools to private or parochial schools.

Finchem voted for the expansion in a 2017 bill, which was halted because of the referendum, sending the decision to voters this November.

Roberts, the other Republican candidate, said it's important to be open-minded with education, adding that it's a huge economic driver.

"There's a narrative being sold to people that if we don't support only public education, that there's something wrong with that, and I'm not buying into that," he said during a Clean Elections Debate on Sept. 21. "I support all education: higher education, vocational education, public education."

He said as a father, he thinks taxpayers should decide what type of education their tax dollars fund, whether it be a public school or something else.

Prop. 305 opponents say the public school system is already underfunded and can't support losing money to private schools. They also argue that students with disabilities would be less likely to obtain the scholarships because they'd be competing in a much larger pool, with no priority for them written into the new law.

LD 11 representatives have been solidly Republican since 2013 when it was a split House. The district includes Oro Valley and Marana as well as Pinal County communities and the City of Maricopa, with roughly 39 percent of voters being Republicans, 27 percent Democrats and 34 percent don't belong to either party.

Democrat Hollace Lyon said independent voters should choose her because of her focus on fiscal responsibility and government accountability. She said Arizona's deficient education funding—one of the lowest in the country—is a symptom of mismanagement and a lack of accountability in the state legislature.

"I am a little frustrated that in the 10 years I've been here, my taxes have gone up three times, and the public schools are more than $600 million underfunded every year," she said, adding that inadequate road maintenance is another symptom of fiscal mismanagement. "There are a lot of things that need fixing we thought our tax dollars were going to fix, and they aren't getting done." A retired Air Force Colonel, Lyon first ran in 2014 and lost to Finchem and Rep. Vince Leach, who's currently running for the open LD 11 Senate seat. While winning in such a red district may be an uphill battle for a Democrat, she's garnered a lot of support, raising more than any other LD 11 House candidate: nearly $122,400, from mostly small donations.

Finchem has raised about $71,200, as of the August finance report. Roberts is the only Clean Elections candidate in the race and so received $16,995 in public funding and another $5,580 in donations. And Quiroz has only raised $1,660.

A political newcomer, Quiroz said she got into the race "so teachers don't feel like they have to walk out again." She's one of a number of public school teachers who were inspired to run for office following the Red for Ed movement. She said the legislature needs to have a secure and steady budget for public schools that isn't subject to cuts.

"A good education—a good system—is synonymous with a good economy, and Arizona needs that desperately," she said.

The wife of a Marine veteran, Quiroz said her other priorities include adequate veteran services in rural areas and supporting small businesses.

When it comes to business, Roberts thinks Arizona is doing something right, touting Gov. Doug Ducey's assertion that more than 300 businesses have moved to Arizona since 2015.

Roberts said if elected, any legislation he supports would revolve around keeping the cost of living and doing business low.

"We have a lot of people that vote with their feet and move to the state of Arizona because our cost of living is low and we don't have high taxes," he said.

Finchem said, if re-elected, his No. 1 focus will be employment and continuing to attract new businesses to the state, saying that the state has created about 13,600 well-paying jobs in the Tucson-area over the last year.

Lyon said she agrees with her Republican opponents that incentivizing job growth is an important role of government and that small businesses do feel overtaxed and over-regulated. Bringing it back to education, she said along with jobs, the government needs to make sure people have access to a good education and training.

Quiroz thinks the way small businesses are taxed should be revisited to allow them more funds to re-invest in their businesses. She also supports vocational training as an alternative to college or working right out of high school.

Another place the Republicans and Democrats differed was on Prop. 127, which would require utilities to get 50 percent of their energy from renewable sources by 2030.

Finchem said if voters approve this law, it would increase people's utility bills. Besides affordability, he suggested that renewable sources are not efficient or reliable.

"You might not like nuclear. You might not like coal," he said. "But at the end of the day, when the lights aren't going on and your AC's not working at midnight and the wind ain't blowin' and the sun ain't shinin'—you don't have power."

Finchem thinks the state may already be doing too much for solar and suggested redirecting the $27 million a year that the state spends on solar subsidies into public education.

Both Lyon and Quiroz said they're in favor of Prop. 127. Quiroz said severing the dependency on fossil fuels is something the state need to do for the future generations.

Lyon said Arizona needs to invest in renewable-energy research and development and that using solar energy could actually make energy costs go down. She said it's also important to elect officials to the Arizona Corporation Commission who will keep energy rates down.

"If we had gotten behind solar energy and renewable energies back in the '70s when we saw this train wreck coming, we wouldn't be in this situation now," she said. "We are so dependent on fossil fuel energy and power that we can't see beyond that."