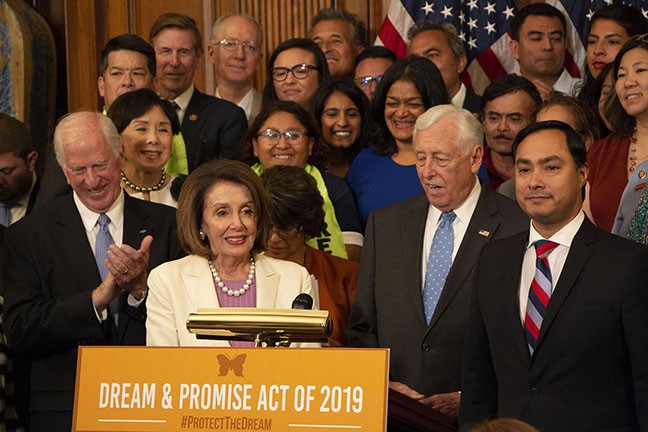 Miranda Faulkner/Cronkite News
House Speaker Nancy Pelosi, flanked by other Democratic House leaders and back by DACA recipients, rallied for a Dream Act bill that passed along part lines June 4.

The House voted mostly on party lines last Tuesday, June 4, to approve a bill that would protect millions of "Dreamers" from deportation and give them a pathway to citizenship, a bill Republicans said would only lead to more illegal immigration.

Just seven Republicans crossed the aisle to vote for the bill, which passed June 4 on 237-187 vote. The vote from Arizona's delegation was even more cleanly partisan, with all five Democrats supporting the bill and all four Republicans opposing.

"You know, this is long overdue," said Rep. Raul Grijalva (D-Tucson) before the vote. "This will be, at least for the House of Representatives, a break from this deadlock of not being able to talk about immigration other than the wall."

But Rep. Paul Gosar (R-Prescott) joined other Republicans who accused Democrats of pushing a political measure that critics say will not do what supporters claim and has almost no chance of passage in the Senate.

"It seems incongruent that rational people would actually try to be pushing the Dream Act instead of what's going on on our southern border," Gosar said. "This is dead on arrival, it's not going anywhere in Senate."

The Dream and Promise Act of 2019, which combines two bills, was one of the top priorities for House Democrats this year.

The Dream Act would stop deportation of more than 2 million "Dreamers"—immigrants who were brought to this country illegally as children and who may not know any other home—while the American Promise Act would do the same for about 500,000 immigrants here on Temporary Protected Status and Deferred Enforced Departure status.

Those immigrants could apply for conditional permanent legal residency status and could get work authorizations. In order to qualify, Dreamers would have to have been here for at least four years, have been under age 18 when they came here, could not have been convicted of certain crimes and would have to be in school or working toward a diploma.

Previous recipients of Deferred Action for Childhood Arrivals, an Obama-era program the Trump administration is trying to reverse, could also apply for protection. TPS and DED recipients, who have been protected from deportation because of dangerous conditions in their home countries, could apply for a green card if they have been here since 2016.

Supporters like Rep. Greg Stanton (D-Phoenix) said the bill would "take these young people out of the shadows and bring them fully into our economy."

"That is a great thing, to give these young people who came here through no choice of their own, the maximum opportunities for success," said Stanton, who later described the measure as "an economic stimulus bill."

But Republicans said the bill penalizes immigrants who have followed the rules to come to the U.S. and apply for citizenship, and that it would only entice more migrants to try to cross the southern border, which they said is in crisis.

"My home state of Arizona is at the forefront of the crisis on our nation's southern border," said Rep. Debbie Lesko (R-Peoria) in remarks on the House floor. "But the bill before us today offers no solutions and will instead, I believe, exacerbate the problem."

Customs and Border Protection reported apprehending 531,711 migrants at the southern border through the first seven months of this fiscal year – already more than the 521,090 apprehended in all of fiscal 2018.

Stanton agreed that comprehensive immigration reform is needed. But he called the Dream Act an important first step for a Congress that has been deadlocked on the issue for several years.

"No issue represents broken Washington more than our inability to pass real immigration reform in the United States of America," Stanton said.

"There's no doubt that Arizona would benefit from it, it would be a real economic shot in the arm for the state," he said.

Republicans accused Democrats of taking advantage of their House majority to shove the 53-page bill through. They complained that Democrats limited amendments and had to waive a "pay-go" requirement that otherwise would have required budget cuts to offset the estimated $34.6 billion cost of the bills.

But Democrats celebrated as soon as the bill got enough votes to pass, clapping along with spectators in the gallery who began to chant, "si se puede," and then, "yes, we can," before being gaveled back to order.

While few are giving the measure much of a chance in the GOP-controlled Senate—or that the bill would be signed by President Donald Trump if it did pass—Grijalva was hopeful.

"If the majority of the senators want to continue this division, this ugliness that's going on, to continue to feed Trump the cannon fodder for him to continue to divide and be ugly and nasty about this whole issue of immigration, then don't do anything with it," he said. "But if they care a little bit about this nation and its ability to move forward on this issue, they need to pass it."