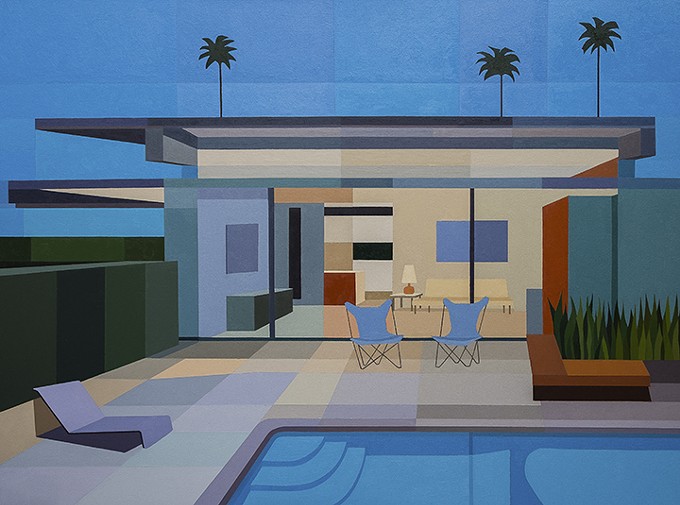 Andy Burgess, native of foggy London, has long made paintings and drawings of cityscapes and buildings, but once he transplanted himself to Tucson and the sunny Southwest in 2009, something changed.

He grew enamored of the sleek mid-century modern houses of L.A. and Palm Springs and even Tucson, and his palette made a giant shift to the hot colors of the desert, to glowing yellows and sizzling reds, and to the bluest blues of Tucson's skies.

The two impulses propelled a whole suite of fantastically colored architectural paintings, on view in a small solo show at the Tucson Museum of Art until April 22.

In the seven oils on canvas and two acrylics on view, Burgess banishes the austere white of typical mid-century modern houses and bathes them instead in delirious desert color. But he's faithful to the tenets of architectural modernism, making disciplined drawings that strip the buildings down to strict geometries.

"Wexler Steel House IV," a big oil on canvas, pictures a simple modernist house, all horizontal lines and cubes, the de rigueur Los Angeles swimming pool in front. (Burgess's houses-cum-pools give a shout-out to David Hockney's famed paintings of the same subjects, also illuminated by L.A. light.) In the small reproduction pictured here, it's hard to grasp the magisterial grace of this large work, which careens 7 feet horizontally across the gallery wall and vertically up about 6 feet.

The strong diagonals of the house's fence and the pool invite a viewer in, and it's not too much of a stretch to say that the colors and shapes become a processional, leading a viewer inside to a bright and even sacred space. The house is a modernist temple, and the clean-lined living room glows like an altar.

The alluring yellows and ochres of this interior sanctuary are punctuated by earth red, green and black, and balanced top and bottom by a cerulean sky and pool. Framed by a dark fence on one side and a wall on the other, the house is filled with floating squares and rectangles that seem almost mathematically arranged. Reduced to its simplest form, the place turns into a lovely colored geometric abstraction.

The artist works from a variety of sources, from his own sketches, images on the internet and photos, particularly the works of Julius Shulman, a 1960s photographer of modernist architecture. Burgess doesn't necessarily cleave to a particular building in each painting, but "Wexler Steel House IV" is based on a specific house designed in 1962 by architect Donald Wexler, in collaboration with Rick Harrison.

Wexler worked in Palm Springs for decades, starting in the 1950s, specializing in all-steel, desert-adapted houses. Pictured in a photograph in a museum brochure, the steel house is a classic modernist work, with a flat roof, square façade, a wall of windows overlooking the pool, and period furniture inside and out.

Burgess respected those forms, even including the homeowner's lamp, couch and butterfly pool chairs in his painting, but he jazzed up the composition, strengthened the shapes and supercharged the pristine white walls with radiant color.

A second painting, "Wexler Noir," also closely resembles the Wexler/Harrison house. Painted in the dramatic tones of twilight, the house turns shadowy, and the pool and the living room are midnight blue. But the lamp, couch and patio chairs are still visible.

No humans are seen in Burgess's houses, but he likes to paint their cool modern furniture poolside or just inside a living room's glass walls. Just for fun, some examples of iconic mid-century furniture—real, not painted—are displayed in a small companion exhibition. Their simple, soaring forms—like those of the houses—evoke the period's sense of joyful liberation from the dark interiors and heavy furniture of earlier epochs.

The still-popular Eames lounge chair and ottoman, created in 1956 by husband-and- wife designers Charles and Ray Eames, stand side by side with a hip black "bird" chair and ottoman from 1952, by Harry Bertoia.

A spare circular table in tubular black steel and glass was designed in 1927 by Eileen Gray, an Irish architect and modernist pioneer. Burgess also pays homage to Gray in a black-and-white etching of what she called the 3-1027 House, a daring flat-roofed structure with walls of windows, an ahead-of-its-time house built in the late 1920s.

A glass case of Burgess's notebooks, filled with deft watercolors and drawings, chart his interest in architectural modernism, from its early-20th-century German origins and on to Frank Lloyd Wright. A beautiful little watercolor pictures Wright's Guggenheim Museum in New York. Burgess's version has all of the Guggenheim's famous curves, but its normally white façade is colored in every shade of the rainbow.

Wright's work shows up again in Burgess's "Fallingwater," an exhilarating large-scale oil of the famed Wright house in rural Pennsylvania. Painted from an extreme angle below, the house's golden cantilevers zoom out into space.

Most of Burgess's large paintings are devoted to California dreamin' but a few pay homage to modernism elsewhere. "Rietveld Schröder at Night" pictures a large-scale 1924 Dutch building by Gerrit Rietveld, painted in subdued tan and beige, and presiding under an inky black sky. "Paraty House," dressed up in Burgess's crayon orange, yellow and red, honors a Brazilian house with a dazzling reflecting pool.

And "TWA Terminal and Lockheed Constellation Airliner at JFK Airport" in New York sums up the cheerful giddiness of 1960s Googie architecture. Burgess has painted a large plane up front, but it's Eero Saarinen's terminal in the rear that seems more likely to take flight. The roof of the huge building curves into a set of giant white wings, ready and willing to go off into the wild blue yonder.