There's a line in August Wilson'sTwo Trains Running, in which Holloway, a character described in the script's stage directions as "a man who all his life has voiced his outrage at injustice with little effect," does just that.

"You say the word "gun" in the same sentence with the word 'nigger' and you in trouble. The white man panic. Unless you say, 'The policeman shot the nigger with his gun'... then that be alright. Other than that he panic."

There's also a black woman feeling marginalized by the mobilization and activism efforts of her own community, a local restaurant shutting down due to gentrification and a new Republican in the White House. You could say it's got some relevant themes.

Arizona Theatre Company's production of Two Trains Running, opening this Friday, Jan. 25 at 7:30 p.m., is directed by Lou Bellamy, founder and artistic director emeritus of the Penumbra Theatre Company, a venture dedicated to creating excellent theater exploring the African-American experience (and which has produced more of August Wilson's plays than any other theater in the world). With the direction of dozens of shows and an Obie, or an Off-Broadway theater award under his belt, Bellamy's resume might just rival the length of many of the scripts for the plays he directs.

Perhaps most interestingly of all, he was friends with Wilson, for many years before Wilson's death in 2005. He directed the playwright's first professional show at Penumbra. He has stories about going to productions of Wilson's plays for the first time and hearing the characters in the show have conversations that he had with Wilson years earlier. So, even aside from the fact that he's directed this particular Wilson show at least four times, it's hard to imagine someone better qualified to direct this show.

Two Trains Running is the seventh in Wilson's Pittsburgh Cycle, a series of 10 plays exploring the African American experience, each taking place in Pittsburgh's Hill District in a different decade of the 20th century. This one takes place in 1969—the year after Martin Luther King Jr.'s assassination and the resulting 1968 Pittsburgh riots—in a diner slated to be demolished as part of the city's renovation project. The play is set in the diner, where Memphis, the owner, Risa, a waitress who has scarred her own legs in hopes that it will get men to look at her as something more than a sex object, and a cast of other characters from around the city gather often.

"The way I've blocked it, people come into the restaurant, sit in the same chair, take off their hat in the same way day after day, and it becomes a sort of a womb, where inside of it, they're warm and cozy and so forth, but the outside world is just outside the door," Bellamy says. "What is created by this ritual is a safe space where they can be themselves and show their beauty and intelligence and so forth. They're not educated people, but they're brilliant. They're philosophers, and so forth."

Bellamy himself sort of stumbled into theater while he was in college at Minnesota State University, when a show the school was putting on needed a black actor ("I found out I had a little bit of talent, and there were girls there with words already written to say to them, so what's bad about that?" he jokes), but he realized its power quickly.

"I began to see the way in which drama or the theater gives the opportunity for an audience to enter a discussion or an experience heart first instead of head first, so they're feeling things you know?" he says. "You can get at stuff with drama and with the theater in sometimes a not-so-threatening way. Sometimes it is threatening. But it allows for that at a distance that many people feel more comfortable in entering. I use theater for social change. So it's a medium that allows me to do that." 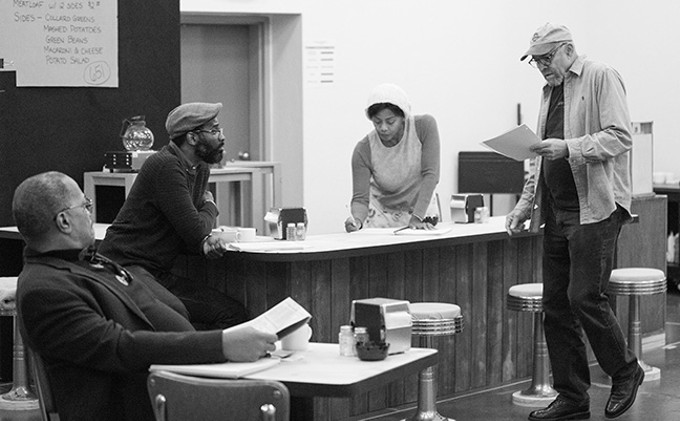 Bellamy is also a big admirer of Wilson's writing, which can make even characters with the fewest lines the most memorable. Case in point: Hambone, a mentally handicapped man who only says two phrases throughout the whole of Two Trains Running: "He gonna give me my ham" and "I want my ham." He likes that Wilson writes ensemble plays, because, he says, that's the way black communities are structured, and because a wealth of characters allows for the same theme to come across in different ways: Hambone wants his ham, Memphis wants to keep his restaurant, Risa wants to be respected.

"Each of these characters is sort of echoing, 'I want my ham,' in a different kind of way," he says.

Even with the utmost respect for the playwright, a director's job involves a certain amount of interpretation. When Wilson saw Bellamy's first production of Two Trains Running, he told his friend that, had he been around during the rehearsal process, he wouldn't have let Bellamy make many of the directorial decisions he did.

But no, Wilson was glad he wasn't around. Bellamy's decisions came from a different perspective, but seeing them in action, Wilson agreed they were ones that made you.