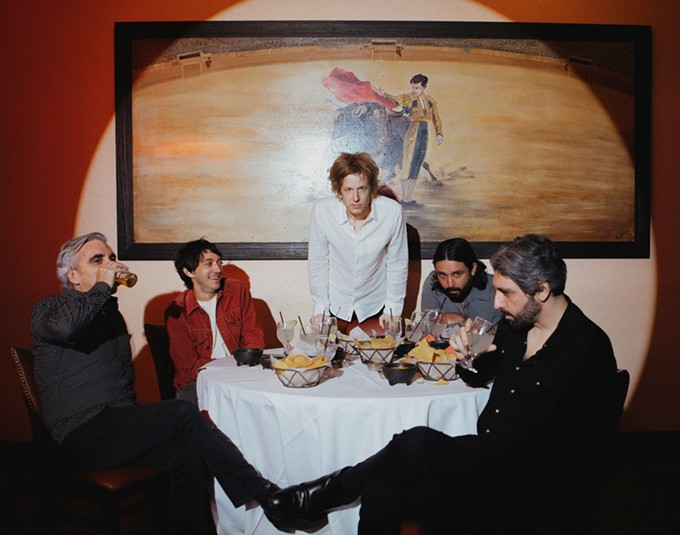 “Maybe,” Daniel says laughing. “I think that probably snuck in there somewhere. It’s not something that I was thinking about directly. But it was a one of those things where later I look back and I’m like, ‘Oh yeah, I can connect the dots.’”

Ahead of Spoon’s upcoming tour, including a stop at Tucson’s Rialto Theatre on Friday, June 3 at 8 p.m. with special guest Geese, Britt Daniel was relaxing in his Austin when Tucson Local Media caught up with him. While the song in question can easily be interpreted as either a lament of a failed relationship or a snapshot of loneliness amid the COVID-19 lockdown, Daniel goes on to say of “Lucifer on the Sofa” that it was written in April of 2020 at the height of the panic surrounding the initial lockdown, after a majority of the record had already been written. “I don’t think it could have been written any other time, really,” he says. “That kind of perspective.”

Here’s what he had to say about five of Spoon’s most essential songs:

“The Mystery Zone” from Transference

“I wrote that one in Portland. I had a house for the first time. I never lived alone in a house before, and suddenly I could afford one. I had just seen I just seen Chuck Berry play in St. Louis. He was 80 years old and was doing duck walks. Several times during the show he stopped and read little bits of lyrics or poetry that he wrote as a kid. One of them had a had something about a faraway place and building a house, and that became a sort of jumping off point for ‘The Mystery Zone.’ A house in a faraway place.”

“Wild” from Lucifer on the Sofa

“It had been suggested to me that I tried doing some co-writing. It’s something I’ve never really done. I’ve done co-writing with bandmates, but not with people outside the band. [Jack Antonoff] was suggested, we got together, and he was the guy that by far I thought like, ‘Well, OK, he’s providing something that I wouldn’t normally do.’ And we were working fast. We kind of came up with chords, he put down a bass line, and I hummed a melody, and that was as far as we got that day. And then the melody I hummed didn’t end up being what I used. Years later, I finally got it together to write the words for that song during lockdown.”

“Us” from Hot Thoughts

“‘Us’ has got a lot to do with that song ‘Pink Up.’ I recorded Ted Taforo playing sax on ‘Pink Up,’ and it was so good. After he left that day, I listened back with no instruments and just his sax and I was like, ‘Okay, this is going to be its own song. And I thought it would be a cool thing to have this sort of theme that runs through the record where you hear it here and then you hear it again at the end. It was sort of a special recording session for me.”

“New York Kiss” from They Want My Soul

“I wrote that one in Austin in the same one-bedroom apartment that I wrote ‘The Way We Get By,’ ‘Small Stakes’ and all those of that era. I think I wrote it during the time of writing Gimme Fiction, and Jim and I disagreed on how to present it. I wanted to have sort of a dance beat. Jim didn’t want to do it. And I said, ‘Fine, I’ll save it for later.’ And we didn’t end up recording it for another 10 years or something. It was Alex [Fischel] that came up with all those great keys that sound like Eurythmics at the top of it. That’s a very Alex keyboard line, sort of a repeating three notes thing. He’s great at that.”

“Everything Hits at Once” from Girls Can Tell

“I wrote that one after I moved back [to Austin] from New York. I kind of bonded with [producer] Mike McCarthy when I was in New York and he said, ‘Let’s go back to Austin where life is much cheaper and let’s finish up this record.’ We recorded a few more songs, which were ‘1020am,’ ‘Believing is Art,’ and ‘Everything Hits at Once.’ I remember thinking it was a really great melody and it was a total break from anything we’d done before. Like if you listen to ‘Everything that’s at Once’ and compare it to the album before, A Series of Sneaks, it’s like, it’s so different, you know? And I love that. So, we leaned into that. That’s why it ended up being the first song on that record because it was a show of, ‘OK, look what else we can do.’ It was just a whole new world.”

Tickets available at Ticketmaster.com and the Rialto Theatre Box Office