Five years ago, when the original Ghost Rider came out, I gave the milquetoast film a somewhat fair review, asking Marvel to "get sicker with the sequel."

Now we have the sequel—and, not surprisingly, the folks at Marvel didn't follow my "get sicker" suggestion. If the original was milquetoast, this one is more like Melba toast soaked in sour milk, tossed to the floor and mushed by an angry little girl wearing Minnie Mouse shoes.

In other words: Ghost Rider: Spirit of Vengeance is one wimpy, cheap-looking movie.

Nicolas Cage returns as Johnny Blaze, a cartoon character who is having a very hard time translating to the big screen. The first film was an origin story, establishing the fact that Blaze sold his soul to the devil. This one picks up a few years down the road with Blaze not adjusting well to the life of a guy whose head occasionally explodes into flames. He's hiding out in Eastern Europe, has let his hair grow out and—because he is being played by Nicolas Cage—suffers from crazy mood swings.

Because this movie involves Satan, it has to feature some kid who is going to be sacrificed, right? That kid is Danny, played by Natalie Portman lookalike Fergus Riordan. He and his mom, Nadya (Violante Placido), are running away from the devil, played by Ciarán Hinds (who replaces the original film's Peter Fonda). He wants to use Danny as a human vessel, because the Ciarán Hinds vessel presumably has disturbingly high cholesterol numbers and a bit of the gout.

There's some dude named Moreau (Idris Elba) who looks to protect Danny, and eventually calls upon Johnny Blaze for a little help. For some reason or another, Moreau seems to have the power to restore Blaze's soul, so he makes a deal to return the soul if Blaze assists. The deal is made, and Cage goes into shrieking-weirdo overdrive.

This story calls for a straight-up, hardcore R rating, but Marvel seems too afraid to take the Ghost Rider into the dark territory the character deserves. Instead, we're getting weak, PG-13 installments, with a confused-looking Cage delivering some of his worst work.

The first Ghost Rider had some nice production values behind it. While it looked good, it surrounded Cage with subpar actors (Eva Mendes, Fonda, freaking Wes Bentley) and covered his head with a lousy hairpiece. At the very least, it had something resembling a coherent story, and Cage had a reasonable level of control over his performance.

This time out, it's as if directors Mark Neveldine and Brian Taylor realized they had a dud on their hands and told Cage to go into psycho/Bad Lieutenant mode to attract his diehard fans. This results in random scenes of Cage doing his patented cuckoo act, something that can be amusing, but is odd and out of place when poorly directed. Here, it's definitely odd and out of place.

An offshoot of Marvel called Marvel Knights, a company focusing on "darker" Marvel stories, produced the film. Vengeance was put together for far less money than the original, and it shows. The lousy Punisher: War Zone, and now this, give Marvel Knights a pretty lousy record. So far, it seems that Marvel Knights is an excuse to do lousy films with lower budgets—movies that would go direct to video if they didn't have Marvel characters at their centers.

The lower budget is evident in the art direction. There is one slight improvement over the prior film: The flaming skull now has a charred, smoky appearance rather than the oddly clean, white skull from the first film. It's a little creepier.

Blink, and you will miss Christopher Lambert (Highlander's Connor MacLeod!) as a priest dude with writing all over his face. Pretty-boy Johnny Whitworth plays ruthless nasty-guy Ray, hired by the devil to find the kid; he's eventually transformed into one of the dumbest-looking movie monsters ever.

It's a little surprising to see Ghost Rider get such a shoddy sequel. While the original was not a critical favorite, it had a worldwide gross of more than $225 million on a $110 million budget. The sequel's budget was a little more than half of the original—five years later. It's like they set this thing up to fail—and it certainly has, at least on a filmmaking level. It looks awful and plays out horribly, like many recent Cage vehicles.

You have the option of seeing the film in 3-D, but I would suggest the option of not seeing Ghost Rider: Spirit of Vengeance at all.

Today in Creative, Yet Desperate Attempts to Find a Job 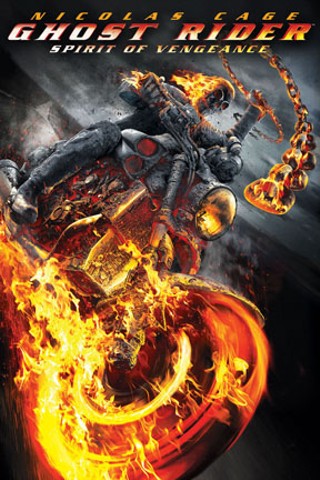