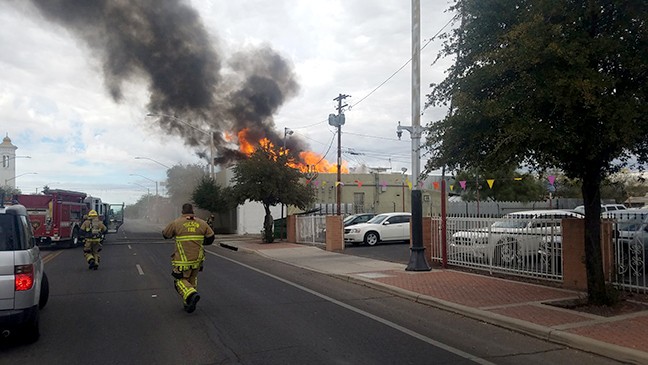 Oliver Ray opened Café Aqui in 2010. He said back then there weren't many coffee roasters in town, especially on the south side.

"I wanted to open a place where people could come and get a cup of coffee and see the coffee roasting process," Ray said. "It was my hope that people could gather there and interact with each other. Instead of free WiFi, it was WiFi-free. There were books and records lying around, I hosted performances there, too."

Over time, Ray transitioned to roasting coffee for wholesale customers. But after his shop on the southern edge of downtown went up in flames last Wednesday, Dec. 5, Ray now jokes that it's "the most unavailable coffee in town." (That's only partially true; Ray helped the nearby Five Points restaurant develop their coffee menu, so now people can go there if they want a bag of his coffee or a nice cappuccino.)

Tucson Fire Department received a call at about 2:15 p.m. from a resident who reported that their apartment was full of smoke and something was on fire. Dispatch crews reached the scene five minutes later and were able to put out the flames within 30 minutes, but the damage had already been done.

Two residents, one male in his 60s and one female in her 50s, were left without homes by the blaze. They were referred to the American Red Cross to seek shelter in the wake of the fire. A second business, Faun Salon, also sustained extensive fire and water damage from the flames that started in one of the apartments.

"The structure posed a unique challenge to crews as it was a mix of studio work space with residential units situated behind or above the work spaces," according to a TFD press release.

While the origin and cause of the fire is still under investigation, a large amount of support has come from Tucson residents to help the hair salon and coffee roasting company get back on their feet. Two GoFundMe campaigns launched the same day that the fire happened have generated over $8,000 in donations as of Monday.

Anna Josette Phipps moved to Tucson four years ago from Oakland, California. She opened Faun Salon in February of this year.

"My approach to hair is holistic. I try and stay as close to nature as possible, both with the products I choose and how I approach my clients," Phipps said. "I have a 10-year background in Reiki and when appropriate, I apply that energy work to the process of hairdressing I've developed over the past 12 years."

You might call it "hair medicine," she said. Phipps believes there is an art to beauty, and providing a diverse clientele with masterful haircuts, color and styling at reasonable prices is most important to her. Her studio was as an environment that "honors sacred space for this kind of connection to how one truly wants to express themselves through beauty."