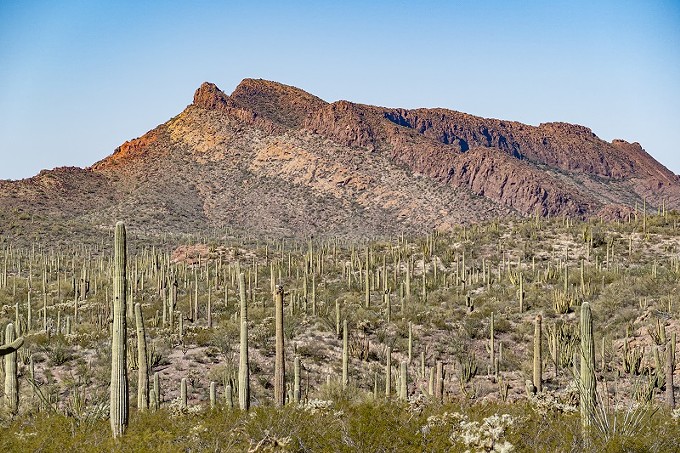 July 2020 burned into the record books as the hottest month in Tucson history. At least, that was the case until August 2020 had the mercury rise even higher. Both months highlight a rise in temperatures and drought conditions that is particularly affecting the American Southwest. Though the hottest single day remains June 26, 1990, last summer's average temperature was solidified as Tucson's hottest ever—and contributed to 2020 ranking as the driest year in more than a century of weather records.

On April 12, Scientific American published an article putting it bluntly: "We are living in a 'climate emergency,' and we're going to say so. It's time to use a term that more than 13,000 scientists agree is needed." Last year saw California's largest wildfire season ever. And in February, Texas fought through a frigid winter storm that turned out to be the state's costliest natural disaster on record. And between the two, the Sonoran Desert is grappling with its own climate struggles.

Of course, the scrubby, spiney plants surrounding us are nothing if not resilient. Cacti can go multiple years without water — but even the desert has its breaking point. When examining temperature and water scarcity in the Southwest, the Environmental Protection Agency noted that although the early 1900s and the 1950s experienced their own considerable drought, the last decade has seen the most persistent and severe droughts on record.

"The biggest long-term threat is available water," said Steve Smith, an associate professor in the University of Arizona's School of Natural Resources and the Environment. Smith has researched plant science, climate adaptation and sustainability for more than four decades, specifically on how plants native to the Sonoran Desert respond to water and high-temperature stress. "When I think long-term, I mean greater than 15 years from now. And I think we're already seeing some mechanical and societal impacts of reduced water."

When Smith discusses water scarcity, he includes both imported water and local rainfall. Some good news about local water: Thanks to environmentally friendly water steps, Tucson is using less water per capita now than in decades past. Despite an increase in population, water demand for the Tucson area has also lowered: 133,000 acre-feet of water in 2000, versus 110,000 in 2017. In addition, in a water plan update, Tucson Water forecasted an increase in their reclaimed water from 12,500 acre-feet per year in 2010 to almost 15,000 acre-feet per year by 2030.

"We've done some really great things with our water use. But when I think of water concerns for the Tucson Metropolitan Area, municipal water is going to be a big issue for the next few years," Smith said. "It's coming from the Colorado River, and we've been smart and banked so much in our aquifer, but that river that so many people are depending on is the limiting factor. That's going to require region-wide changes."

These region-wide changes are projected to further impact the agriculture sector. In early 2019, the Arizona legislature passed a Drought Contingency Plan aimed at conserving the water level of Lake Mead (a reservoir of the Colorado River). The water level of Lake Mead has dropped nearly 150 feet since the beginning of the current 20-year drought, exposing white streaks of previously submerged rock along the lakeshore.

Of course, these plants can't rise forever—eventually there may be no more suitable terrain atop our sky islands. But this is far in the future. As Smith explains, despite increasing heat and drought, desert plants are resilient and should only change incrementally over the years.

"These plants are incredibly persistent. So it's going to be a very slow decline. But in 100 years, it will definitely look different," Smith said. "We're not going to see complete losses, but decline in the health of populations over human lifetime. Over the next 40 years, we can expect to see considerably fewer young saguaros. Push that forward another 40 years, and we might see places that used to have saguaros that don't have them anymore."

Though slow, there is already evidence of climate change impact on saguaros. The Rocky Mountain Climate Organization and Natural Resources Defense Council released a report listing Saguaro National Park among the most imperiled national parks, due to increased heat and drought.

Saguaro National Park biologist Don Swann co-wrote a report in 2018 explaining how the establishment of new saguaros at the park has been relatively low since the early 1990s, a period when temperatures in the Sonoran Desert began rising dramatically and the area entered a long-term drought.

Swann writes that although the population of saguaros in the park is quite healthy, establishment of young saguaros has nearly ceased since the early 1990s in nearly all habitats. Of the nearly 10,000 saguaros surveyed in the report, only 70 were less than 0.1 meter in height, or less than 11–15 years old.

The heat is harming people, too. According to the Arizona Department of Health Services, nearly 3,000 people visit Arizona emergency rooms because of heat-related illnesses each year. Over the last decade, the state has seen more than 2,000 deaths from exposure to "excessive natural heat."

And these cases are only becoming more prevalent. In 2009, ADHS saw 154 heat-related deaths. In 2019, that number increased to 283. In fact, the number first breached the 200-mark in 2016 and has not dipped beneath during any year since.

"One of the things that helps me not get anxious is knowing how evolution has done some really slick things, and maybe it will work out," Smith said. "Those saguaros may be out there laughing at us, because they're so uniquely adapted. We may be surprised that they're able to evolve quick enough and don't have to rely on migration. They may be able to change themselves to an extent as the climate changes."