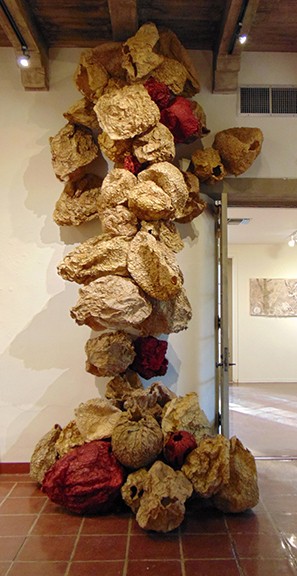 A giant pile of crinkled paper spheres rises up to the rafters in the Tohono Chul gallery.

Made out of delicate tissue-paper dress patterns, the irregular circular shapes also dangle from walls and occupy corners. In fact, they seem to be everywhere, popping up between the other artworks in Desert Corridors and multiplying indefinitely.

More than 10 years ago, their creator, artist Monica Zavala Durazo, regularly drove a 10-ton truck along desert corridors—the dirt roads and trails in the Sonoran Desert. She was a volunteer with Humane Borders, and her job was to fill up the water tanks the group leaves out in the desert for border crossers.

All these years later, Durazo writes, she's still haunted by the "sunburned, blistered, dehydrated, frightened men, women and children we encountered trying to navigate unknown territory." And she feels scarred by the damage done to the fragile desert by law enforcement vehicles running roughshod among the saguaros.

Her dramatic installation, "Migrants and Refugees," a collaboration with photographer Chris Chandler, evokes the desert, to be sure, but it also memorializes the desperate travelers making their way through the waterless wilderness. The wrinkled pods evoke their blisters and burns – and the dehydration they suffered.

The great-granddaughter of refugees who fled the Mexican revolution's violence by crossing northern Mexico on foot, Durazo also addresses the fate of today's migrants who fail to make it out of the desert alive: some of her spheres are painted blood red. The red pods pay mournful homage to the more than 3000 migrants found dead in southern Arizona since the turn of the century.

Easily the most interesting and challenging piece in the show, "Migrants and Refugees" is grim, beautiful and necessary.

Curator James Schaub says the exhibition grew out of a Tohono Chul project to photograph the movement of the park's animals. The cameras set up in the desert gardens captured a coyote early one morning making its way along a path. Javelinas and other animals were recorded trooping through the prickly pears, all of them on the move, intent on finding food, finding water.

The peripatetic animals got Schaub to thinking about desert corridors. As he says, "Washes in the desert are a super-highway for both animals and humans." He conceived of a show that would look at desert pathways, who use them and why.

The 22 artists he selected define the subject broadly. They go back and forth from celebrating the beauty of desert flora and fauna to examining the forces that threaten life in the borderlands. They look at the lifesaving water that splashes through arroyos and at the deadly droughts that dry it up. They consider the impact of the border wall on migratory wildlife. And, like Durazo, they agonize over the human carnage in the desert.

Jim Waid, one of Tucson's best painters, revels in the desert's glories. His joyous "Honey Creek," an acrylic on canvas, is a gloriously sun-dappled scene of half-abstracted barrel cacti, flowers and birds. In a sense Waid owes his career to desert corridors: his meandering hikes through Tucson's dry washes in his early years here, he writes, enlightened him to the "possibilities of making paintings."

The tricky topic of water is tackled in textiles and photos. Miriam Otte focuses on the pure beauty of an arroyo in full flow in "Wash," an art quilt that exults in water's many shades of blue. But quilter Alison A. Banks laments Arizona's long-ago loss of the Santa Cruz, once a river, now a parched wash, dried up by human intervention. Banks's "Save the Santa Cruz River" is another quilted delight: using hand-dyed and commercial fabric, she's stitched together a pretty aerial map of the river that once ran through Tucson.

Anyone who's hiked in bone-dry, drought-plagued Sabino of late will cringe to see the fulsome waters in Bill Kaufman's "Sonoran Desert Toads Mating in Sabino Creek."

This photo on metal pictures a pair of toads cavorting in flagrante in the creek's bountiful waters in wetter times. The toads, Kaufman points out, need the stream to breed and survive. Toads aren't the only ones. A growing human population is straining a limited water supply throughout the Southwest.

Elsewhere on the animal front, Lydia Miszuk celebrates a bobcat thriving in its healthy native habitat. "Rufus Lynx Arizona Bobcat," a charming 3D wall work, has the cat striding along a plant-filled desert path. The piece is ingeniously crafted of paper handmade from saguaro, prickly pear and agave fibers.

Pat Frederick, a retired vet, made a sinuous metal sculpture of another desert cat: the charismatic jaguar. Her "Corazón" honors a real-life jaguar that was shot to death in Mexico. The species has made a comeback of sorts in southern Arizona and northern Mexica, but its path to recovery is full of obstacles. One was recently photographed in the vicinity of the proposed Rosemont Mine, a giant pit affair that would not only push out the jaguar but damage Arizona's wetlands. And the jaguars are also threatened by the existing border wall, which has disrupted wildlife migration routes across the borderlands.

The wall itself is depicted in a deceptively whimsical painting by Michael B. Mason, "Crossroads," who details the species harmed by the barrier. Charles Hedgcock's bracing aerial photo taken near the Huachucas gives a long view of the linear scar the wall has carved into the landscape.

That wall does more than deter wildlife, trigger floods and damage the land. It also kills, by pushing migrants into ever more remote wilderness. Alvaro Enciso records their deaths in red metal wall pieces that mimic the red dots on Humane Borders's maps: one dot for every death.

Stu Jenks grieves the loss of a migrant mother, father and baby in his photo "The Ghosts of the Gutierrez Family, the Sonoran Desert, Arizona." The family died together in the desert, in a stand of saguaros, as they made their way from Magdalena to Phoenix. Jenks photographed the place where they perished, and filled it with a mournful spectral light.