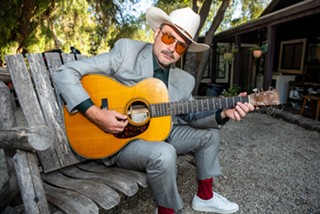 Royston Langdon is best known as Spacehog’s vocalist, but he said he is a songwriter first.

The English rocker shows that talent on his second solo project, the six-track EP Chains, which is set for release on Oct. 29. Besides his songs, Chains includes covers of David Bowie and Iggy Pop songs.

Fans can hear those songs when he opens for the Psychedelic Furs at the Rialto Theatre. Tucson, he said, is a meaningful place for him, personally.

“It’s for personal reasons,” Langdon said. “I’m not going to go into it too much because they’re personal. But I feel like the desert, generally, is a great source of energy. It’s cleansing. It feels very clean to me. I was just talking to someone about it. The sun is this whole disinfectant, especially for an Englishman who has never seen a shadow in his life.”

Being in Tucson allowed Langdon to find what was important in his life and grow as a man. The city, he added, was “the start of a really great part of my life of the last 10 years.

“That was a great place to begin again and find a new way of living. I know it quite well. I was there for a considerable time.”

Other than Tucson, Langdon is inspired by everyday life. He takes those bits and spins it into songs that are “recorded in one way or another.”

“I just write about however I feel that particular day,” added Langdon, who was formerly married to Steven Tyler’s daughter, Liv.

“Chains is a little more upbeat than my last record,” he said. “I’m really pleased with how it came out. Songwriting is part of my makeup that goes back a long time, before I existed. I don’t know. I do have a curiosity and a way of seeing the world that I don’t think is necessarily unique.”

The lead single of Chains is “Halfway Home,” which, he said, was written with a sense of urgency. He is at a crossroads but still full of life.

“Perhaps, with the benefit of a small amount of wisdom, I feel more aware now (than ever before) that one is emotionally always halfway between life and death.

“I’m lucky I survive. Many of my peers have not. To that end, the song is about accepting where we’re at in this very moment and, let’s face it, we’ve all been locked up for a while. I, for one, have given rise to the feeling that there’s not a hell of a lot of time left, so let’s get on with it.”

On this tour, the Los Angeles-based musician will play an acoustic set while next year will offer an electric, full-band jaunt.

“There is something really freeing about standing on the stage alone and seeing where it goes, and having the audience being in a swimming pool—a conscious swimming pool. Sometimes it happens and sometimes it doesn’t. The COVID thing made us aware of how important the human experience is. In our culture, to be a small part of that, is an immense feeling of joy.”